Looking at the history of humankind we can notice two equal situations, similar to the happenings of today. Today we also can see how mankind after a rise of progress appears to go back to decline.  Again see we in man’s history that men will behave on a particular manner  which does not show any respect to her surroundings.

As can be seen from my articles series about the fragility of man (*)  it has come clear that the man has snapped her fingers at the laws that were foreseen for her to organize life.

Today we see the formation of several big powers in the East while those in the West are trying to expose themselves as the largest, but show convulsions of a being omitted like a creaky large tree.  Europe wants to go expand from 27 countries to more but it can among themselves not mutually agree and attain coherence. It starts to feel the creaks and feels the economic mountain collapse.  Not only the European Union, that wants to be a superstate next to big brother America, feels an enormous pressure.  The same fate waits the American and Asian countries, that are united under the same flag and monetary unit while they also try to create  some other super states.  All strive to form the cornerstone of a new world. They want to offer the building stones for a world government.  The world elite seeks an active target. And gladly they see their large power symbolised in a monument or building.  The European Parliament is the first monument that a superstate represents and reveals, via her intense symbolism, and hatred against religion, the plans for a New World Order and their subtle approval of tyranny.

The World Economy Machine would not exist without the need to sustain our world. after World War II everybody tried to build up a new and better world. The Marshall Plan had to bring us over to the best place to live.

Mystery Schools taught that men have the potential to become gods through enlightenment.and everybody wanted to become the god in the new universe. The film industry helped to create many superhuman beings who were adored like the modern gods.

Many million years ago signs were already given to what would happen. Some people listened but more people did not want to listen and did not see what happened in the world around them.

Though the languages got mixed up the human beings used their hands as well to give their ideas form and let them speak. Monuments and architecture were used to give their thoughts a voice. It was a way to communicate the principles of the Mysteries and to celebrate the greatness of the human mind.

The Tower of Babel came to be the first expression of vanity. Man thought to go up to heaven and be able to meet God. Not that they really honoured God as such, but in reality more to become equal to Him. The vain creatures did receive a punishment, one of the few times that God gave a punishment. But thick-headed as man is it was not a good lesson for most of them. Headstrong they continued to go against the Laws of God. Obstinate they overlooked their environment and other human beings.

Their Own Self was and is the most important thing for many. Egoism runs rampant now.

Though there had been the deluge not yet so long ago this did not prevent the men to a loose live.  The descendants of that a family had settled in the land of Shinar a geographical locale of uncertain boundaries in Mesopotamia.

In the Old Writings or The Old Testament, one can find the notation of the events in the  Book of Genesis chapters 10 and 11 telling  of Nimrod‘s kingdom, to have been “Babel [Babylon], and Erech [Uruk], and Akkad, and Calneh, in the land of Shinar.” Verse 11:2 states that Shinar enclosed the plain that became the site of the Tower of Babel after the Great Flood. In Genesis 11 it is mentioned how they wanted to build  a city for them self. With bitumen from the sea of Shinar they constructed a tower that went high in the air. They wanted to get in the realms of the Uppermost in heaven.  For them, it came to make about a name for them self.  The tower had to serve as a recognition point in the landscape, so that people would not loose their way and always could find their way back to the most important city of the world. Also men could then notice who was the most important people.  And that while God had dedicated Noah and his children ‘to fulfil’ the earth  (Genesis  9:1).

Yet had they something learned of the deluge, namely that it was able to destroy them all.  Therefore they wanted to find a solution in making a place of refuge so that that in the future such a disaster would not be able to happen.  By a very high building one could create a save-heaven.  In case there would come back a deluge there could be offered an accommodation.

Man wanted to come to the Superior World and find themselves in the home of the immortals. For them it was clear that man had to climb up and had to come close to God to become immortal as He was eternal. They had to go up into the dwelling places of this High Creature.

The Midrash version of the story even adds that the builders of the Tower said:

“God has no right to choose the upper world for Himself, and to leave the lower world to us; therefore we will build us a tower, with an idol on the top holding a sword, so that it may appear as if we intended to war with God”.

Jehovah God, seeing the blasphemous nature of the Tower, gave each person a different language to confuse them. Unable to continue the work, the people scattered throughout the world.

The idea of building high towers to show the rest of the world that one is the best and most important is still favourite. Today we even see more adventurous people who think they can show the world that they are the greatest.

In many place of the world we can find exceptional building constructions. After the demolition of the Twin Towers it became even more important, according to certain people, to prove the world, the human race is ineradicable. 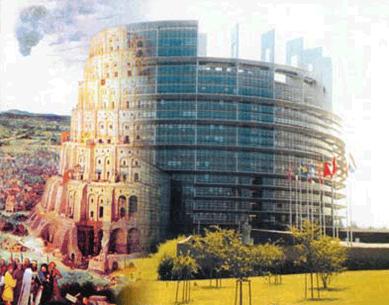 From the many buildings the “Louise Weiss” building, which may look peculiar and modernist has lots in common with the Ziggurat of Babel.Also here we do find the beliefs of the world elite, and how great this nation should be. The Louise Weiss building based on the painting “The Tower of Babel” by Pieter Brueghel the Elder in 1563, should better remind us of that idiotic idea of lunacy and haughtiness.

One of the questions we can pose now is if the construction of the EU Parliament, in the image of the Tower of Babel, sends the message that Nimrod had the right philosophy and his Tower of Babel was a good idea. But that would also mean that we could come to an agreement with the gradual introduction of tyranny, the elimination of the worship of God to introduce dependence on power, all people speaking the same language and the same religion and rejecting God while trying to become gods.

Looking at what happens in the world which has lost any interest in the Supreme being, we can find enough people interested to play for god and to be as superior as god. First there were the film stars, then the television stars, and now we get even the politician stars.

Pride goes before the fall.

Please do read more on this subject of decline by arrogance:

5 Responses to Louise Weiss building and towers after Ziggurat Babel