Apartheid or Apartness #3 Opposition and Escalation

Sharpeville Massacre 21 March 1960, at the police station in the South African township of Sharpeville in the Transvaal (today part of Gauteng)

In 1960, a large group of blacks in Sharpeville refused to carry their passes; the government declared a state of emergency. The emergency lasted for 156 days, leaving 69 people dead and 187 people wounded. Wielding the Public Safety Act and the Criminal Law Amendment Act, the white regime had no intention of changing the unjust laws of apartheid. So the struggle against apartheid became marked by more terrible incidents as the Rivonia trial of Nelson Mandela (1964), the Soweto uprising (1976), the assassination of Steve Biko, countless other tragedies, and the unflinching determination of a people to free itself from an evil yoke.

1960 was the year that the ANC got banned and International pressure against the SA government began. South Africa was excluded from Olympic Games.

Notwithstanding people of different race were not allowed to mix, more people became mixed, but they were considered as coloured and received no more rights as the other blacks. More and more families found also coloured people in their environment and had difficulties with the discriminative attitude of the government.

Not only from inside came criticism. Other member nations of the British Commonwealth at last dared to criticize the apartheid policy. But instead of wanting to listen to the ‘foreigners’ and people in their own country South Africa found it better to withdraw from the Commonwealth in 1961.

In 1964 ANC leader Nelson Mandela was sentenced to life imprisonment.

In the 1970s more than 3 million people forcibly resettled in black ‘homelands‘ or Bantustan.

The U.N. issued a series of declarations urging member states to embargo South Africa, on which many countries followed this request and the country got more and more isolated and fining, at the end of the seventies, several European customers boycotting South African products.

In 1977 the United Nations issued the mandatory arms embargo on South Africa and asked member states “to cease forthwith any provision to South Africa of arms and related materials of all types.”

In 1980 a U.N. committee requested also to stop any export to South Africa of dual-purpose items, i.e. items provided for civilian use but with the potential for diversion or conversion to military use. (Aircraft, aircraft engines, aircraft parts, electronic and telecommunications equipment and computers).

In South Africa also more people started to want to out their voice against the racist system. Also church responsible criticized the unjust system. Several churches in South Africa denounced apartheid more and more openly, led by Archbishop Tutu, Rev. Boesak, and many others. Key documents were the Belhar Confession, the Kairos document and Evangelical Witness in South Africa.

On top of that South Africa also could not escape the flower power movement and a more liberated sex attitude. Whites who came out to be ‘different’, like being gay got in serious trouble and were considered as outcasts and fungus for the community.

Violence started to escalate in the 80 ies and when, at last President de Klerk repudiated apartheid, it was estimated that more than 10,500 people had been killed since Feb. 2, 1990, and when the ANC became legalized the August death toll of 709 deaths in 1990 having been the worst.

Many examples of black resistance to apartheid. 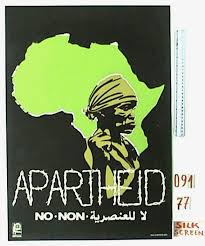 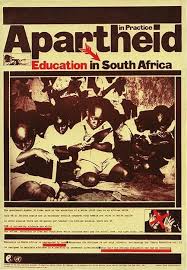 apartheid education. Black schools were poorly funded and for many years taught only what was necessary for an unskilled labor force

Supporters of the African National Congress gather in the 1950s as part of a civil disobedience campaign against apartheid. Photograph: AFP/Getty Images

7 Responses to Apartheid or Apartness #3 Opposition and Escalation