In Belgium we had a lady who knew that it was better to reach many people and give them enjoyment with movement.  {Read about her (Jeanne Brabants) in the obituary for 2014: “Having a responsibility to the public” at the end of this year (2014) or beginning 2015} With her performances she intended broad appeal.

The American brothers Harold, Lew and William Christensen had also a flair of creating choreographies but also dancers who would appeal to all sorts of folks. One of their pupils, William took in his companies, would also continue in the tradition of trying to reach a wide public, but this time not only with classics but by “striking a happy medium between contemporary ballets, in-house choreography and the ‘outside classics.”

Born in 1938, he got more likeness to the World War II and boom children generation, being vivid, full of energy and ebullient, not afraid to try new things out and to go in against mainstreams and governors.
Perhaps like most of us at the after war period, we were looking to go new ways and to break with traditional grounds, also sometimes disappointed with the establishment and thinking we could give a voice on the stage. Original Poster of the musical revue based on the music of Duke Ellington: “Sophisticated Ladies” (1981) conceived by Donald McKayle, directed by Michael Smuin.

Works like “Vivaldi Concerto” and “Symphony in Jazz” inspired us, while “Shubertiade” found its regular way, but astonishing with the marvellous dancers of the Alvin Aily Dance Theatre. [If I remember right, one of my teachers, Judith Jamison her works, later, where not so much appreciated by the board of the San Francisco Ballet.]. I can imagine Michael Smuin having lots of grey hairs trying to convince the board of governors of the San Francisco Ballet the public had moved on and wanted a variety of productions.

In Belgium Jeanne Brabants was her time behead, presenting all sorts of ballets in one national company.

I am convinced that what Michael Suin tried to do, to “strike a happy medium between contemporary ballets, in-house choreography and the ‘outside classics,’ ”  was the good choice and could enliven the theatre. In several regions the boards of the companies where keeping on to old traditions and did not seem to give in into the different tastes of the younger public. Receiving money from the community they often did not want to come to grasp that they had the responsibility to offer something for the whole community.

Smuin was aware he could only live and do his job by the contributing community to whom he had a responsibility. He felt an obligation, first and foremost, to the audience.

“I never thought of it as my company because the title is the San Francisco Ballet,”

“That means you have a responsibility to the people, including the little ladies who come and it soothes them. It was balanced musically, intellectually and theatrically.”

Today we may have gone to the opposite in some countries. In Belgium in the 1980ies we saw already that change to bring only the new and abolishing the traditional and classic. From one site several companies went totally to the opposite, and that again was and is totally wrong.

What is so good about Michael Smuin was that he could bring an acceptable mix with a convincable personal touch. He did not seem to look just for a new movement to create or have something new or to be trendy. As a dancer choreographer myself, I liked  how much he could get out of a dancer and let him or her shine. He also did not mind to bring ‘criticism’ by movement. Some may call it being ” daring, bold and provocative”, but he seemed to get his ideas across the curtain. Sometimes his ballets might have been over ambitious, trying to put too much in one ballet or tackling a literary masterwork to the square box of imagination, whilst he still had to work in a time of lesser technical means than today, and crimping budgets.

Such people who dare to go in against boards or standard traditions the world of theatre needs.

He sees his mission as the preservation of ballet through unorthodox means.

“Classical ballet is a tool to do a lot of different things. It’s up to small companies, more modern companies (to innovate).”

And he believes such innovation is more necessary now than ever. Men and women, who do want to give something else than the mainstream, is what the world of dance needs.

“The invasion of the corporate world has had a good and bad effect on ballet, opera and the arts in general,”

It is not because we should try to get a broad appeal that we do need to have the “bigMac” balletburger. Variation and interesting diversity with full imagination has to be offered to the public, not with some pas de deux or trio’s put one oafter the other, but also having multiple dancers moving around in inspiring movements.

Not only the masses have to be pleased. Everybody may have something at his taste, but the whole has to be bringing all spectators in an other world they are living in daily. Theatre-dance still has to bring the public into other worlds. If it can not do that, sorry, I do find it did not succeed. Ballet, being it classical or modern dance has to cast a spell on the public.

Smuin collapsed and died of a heart attack, in 2007, while teaching company class in San Francisco. His death did not mean his ideas woudl have died out with him. Since this charismatic leader’s sudden passing in 2007, Smuin Ballet has continued to thrive, to prosper, to grow. While still following the path carved by Smuin, his muse Celia Fushille became Artistic and Executive Director and led the company into striking new territory. She believes dancers need new and challenging choreography in order to grow artistically. With her finger on the pulse of what’s hot in the international dance world, she is ever on the lookout for works that challenge. She has alloyed her vision with Michael’s to build Smuin into one of Northern California’s leading performing arts organizations, performing some 70 shows during their regular season in their home venues in San Francisco, Walnut Creek, Mountain View, and Carmel. They also often appear on the boards of New York City’s Joyce Theater, tour in Michael’s home state of Montana, and perform elsewhere in California, across the country, and in Europe.

On March the 7th, 20 years ago the founder and fearless leader Michael Smuin, rounded up a group of ten dancers and choreographed a fundraiser that took place at Yerba Buena Center for the Arts. Needless to say, “Dances With Songs” was a huge success with sold out performances and he launched a lasting legacy for future generations of ballet lovers!

This 20th Anniversary marks a pinnacle moment in the history of Smuin Ballet! 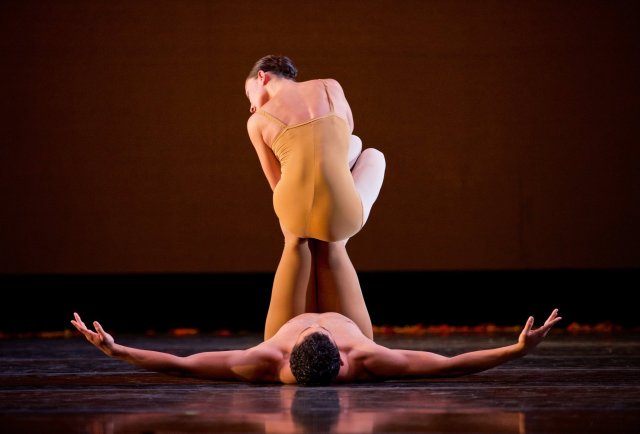 On, the 23rd of March 2014 there was the last performance of XXTREMES, with three exhilarating works, by Jiří Kylián, Amy Seiwert, and Michael Smuin, at the Mountain View Center for the Performing Arts in the afternoon.

The dancers found it (as always), a wonderful performance and they are excited to be back in May with their XXCENTRIC program! #Smuin20th

Allison Jay with the men of the company in
Michael Smuin’s “Carmina Burana”.