Facing an other world

These friendships I could enjoy at work were of a unity which was the worst to miss, when I stopped my theatrical work. I knew it was something incredible, not many could enjoy so much as we did. But by leaving the theatre-world I came to face a new reality which was as a chock, to notice that many in that ‘real’ world had already long ago lost the meaning and value of friendship. 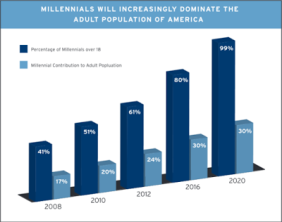 By 2020, Millennials will comprise more than one of three adult Americans. It is estimated that by 2025 they will make up as much as 75 percent of the workforce. Given their numbers, they will dominate the nation’s workplaces and permeate its corporate culture. Thus, understanding the generation’s values offers a window into the future of corporate America.

Everything had come to turn the “Millennials“. Even Microsoft got us to buy the worst software program ‘Millennium,” which was a good example of how the Generation Y got muddled up. Previously we had learned always to look at the others and to set ourselves aside. Now the kids preferred to think of themselves in such a way we started to call them ‘Generation We‘ soon to be exchanged for the ‘Generation Me‘.
The Baby boom seemed put aside, but having an echo, hence the other name ‘Echo Boomers‘, referring to the generation’s size relative to the Baby Boomer generation and due to the significant increase in birth rates during the 1980s and into the 1990s. {Armour, Stephanie (2008-11-06). “Generation Y: They’ve arrived at work with a new attitude”. USA Today.}

The attitude at work had changed, but also in the home. The media had taken over the role of ‘moral teacher’ but tried to get it into the heads of the viewers that no morals were really necessary. Everything could, everybody had to be free to chose to do whatever the wanted, no matter what other people would feel or think.

We got an upswing in births after 1983, finishing with the “political and social challenges” that occurred after the terrorist acts of September 11, 2001, and the “persistent economic difficulties” of the time. {Carlson, Elwood (June 30, 2008). {The Lucky Few: Between the Greatest Generation and the Baby Boom}

The people born during the Great Depression and World War II their kids had become perhaps a Silent Generation. It can be true to call them the “Lucky Few”. {Elwood D. Carlson, Ph.D. in his 2008 book titled The Lucky Few: Between the Greatest Generation and the Baby Boom}

A pink-collar worker performing what is sometimes regarded as women’s work, as a waitress writing down the food order of diners

Those Lucky Few men (some of which fought the Korean War and or during the Vietnam War) had advanced into professional and white-collar jobs while their Lucky Few women concentrated in mostly pink collar work. Today they find themselves settled in retirement and look at their children they had tried to give everything they could. Perhaps of having spoiled their children their kids, not having learned enough to share things with others, they helped bread a generation which was more concerned about own wealthy luck instead of spiritual luck.

Generation Z got fed up with anything smelling religious. They had seen how certain ‘friendships’ of catholic priest had distorted normal human relations. Several television channels concentrated their screenings on those at the mid or late 1990s or from the mid 2000s born children. They had seen how their parents were caught up trying to earn their living and to make the living standard of the family higher, where white collar criminality took worse forms. They got the example of ‘freedom of relationships‘ from the little screen and their parents who started cheating like is was nothing. No wonder their children learned also to switch partners like they switch underwear. SW City, one of the largest areas in Active Worlds, one of the popular virtual worlds in a 3D virtual reality platform.

The Western Post–World War II baby boom or Generation X may have become disillusioned by their friendships they could or could not build up or could live up to. Confronted with the modern age technology several generations living together found now more diversity in their language, making feel the one illiterate and the other old-fashioned or not by the time. Having more and more people from different cultures coming to live round each other, it did not help the communication. More people started feeling themselves isolated or in a world which was not the would they wanted to be in. Many started creating themselves a virtual world on their computers which advanced a lot in technology and got a total new virtual world created. 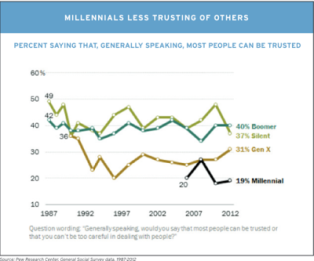 In its latest study of the Millennial Generation, Millennials in Adulthood, the Pew Research Center found that America’s youngest adults were the least trusting of any generation.
Only 19 percent of Millennials agreed with the statement that “most people can be trusted,” a percentage that was about half of all other older generations.

For many it became so much easier to hare away from the real world and to find much interesting characters or avatars on the closed circuit of their small personal private room. Several resorted to the world of technology to realize their dreams, which they did not seem to be able to realize in real life. By taking the flee in the artificial world they also lost touch with the real world and got lesser and lesser real friends. In order to offset the shortage of real friends, many resorted to searching for “friends” on social media.

In many countries it has become a fact that people aged between 18 and 34 now spend more time talking and interacting with friends and family on social media than in person.
You would think it could bring us closer together, but it did not do such a thing. Almost two thirds of those 18 to 34-year olds concede they would be more inclined to make the time to catch up with friends in person if social media did not exist.

We can notice a good thing with those social attributes of technology. Social media helps us keep in contact with our children abroad and with friends we and they made during schooltime, work and when living overseas.

Alarming, at first, may be that when looking at certain blogs and speaking with some young people and looking at some research, that we can find under those people who use social media the most, we find a lot of people who are also experiencing the greatest sense of social disconnection. On the other hand, according to me, this can also be a good sign, having again a renewed feeling of need of real friendship.

Invasion of Normandy a day never to forget

Subcutaneous power for humanity 4 Not crossing borders of friendship

In reply to Lonely in the crowd

Of interest at other websites: