The Haagdijk in Breda is traditionally one of the three entrances to the old city center of Breda, next to the Ginnekenstraat and Boschstraat. The Haagdijk is located close to the port and the extension of the Long Brugstraat and Tolbrugstraat. The street is possibly the oldest shopping street of Breda.

Due to the decree of 1747 which dictated that it was forbidden for Jews to enter within the city walls of Breda, many Jews settled on the Haagdijk (located just outside the city walls). This made the Haagdijk into a densely populated and prosperous street with a lot of middle class houses.

After having been a Saint Pius Institute, number 144 became a music academy then started to deteriorate, standing empty until my brother,  bought it to transfer his Galerie Van Nuland, from the busy Mauritsstraat 3, further away from centre, near the Oranje singel.

This present place is much more interesting, I do find. It should be able to attract more visitors. The northern light coming into the atelier gives a nice touch to the paintings by him on the first floor and on the second floor to the photographic oeuvre by photographer and filmmaker Hetty van Oordt, who has been familiar with a camera since she was ten years old, but still wants to capture the lightness and dreamworld of such a young person in her literally moving ‘stills’.

On Sunday, June 29th, 2014 the opening took place of recent paintings and drawings by Dominique Ampe with a foreword by Cees CJM Janssens: “The Wand Ling“.

I was not able to make it at the opening, but the day before I took already some photo’s with my new small Sony Cyber-shot camera, which I would like to share. Though the paintings I liked most I could not bring to value with such a small camera. I would advice you to find those big modern canvasses at the exhibition gallery, where you also find small copies painted on the ‘canvasses on the walls’ of Old Dutch Classic master-works. Those Older Dutch paintings get a new life in the modern paintings which can take up a whole wall in a modern house, giving it an extra extension and a new dimension.

Some paintings by Dominique Ampe, at the side wall right from the entrance door. 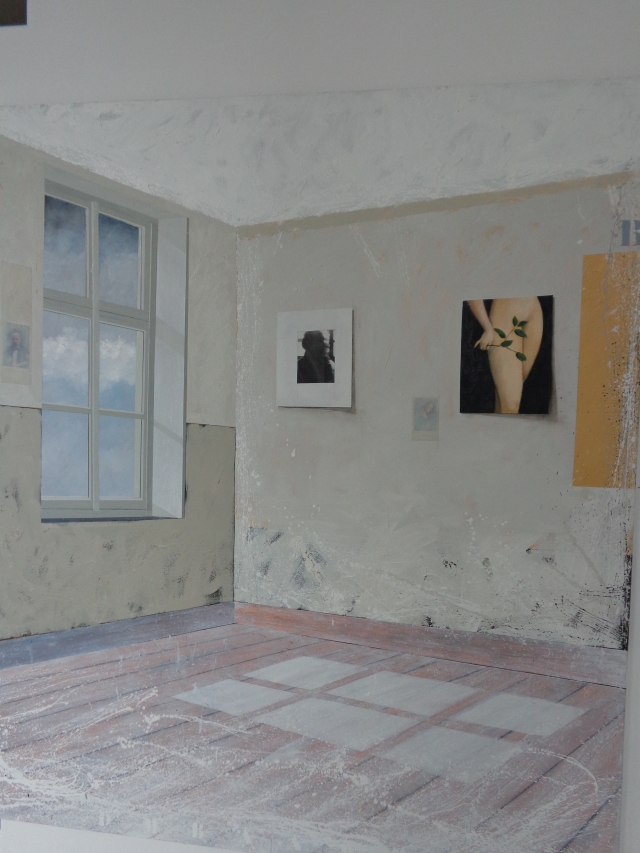 When you would hang this on your wall of three or four meters, you do not need any wallpaper and get a free extension to your room.

Marjolein Pronk looking at the pictures of her brother in law.

Please do find his Gallery:

Homepage of the Gallery Van Nuland