Cartoon by Australian David Pope in reaction of the Charlie Hebdo attack. (Red colouring presenting the bloodshed: by Marcus Ampe)

Early Friday, Security forces streamed into the small industrial town of Dammartin-en-Goële, near Charles de Gaulle airport in a massive operation to seize the two men at the printing house suspected of carrying out France’s deadliest terror attack in decades.

Tens of thousands of French security forces have mobilized to prevent a new terror attack since the Wednesday assault on Charlie Hebdo, which decimated the editorial staff, including the chief editor who had been under armed guard after receiving death threats for publishing caricatures of the Prophet Muhammad.

Two brothers suspected in the Charlie Hebdo newspaper attack continued to be cornered inside a printing house northeast of Paris, having taken at least one hostage and told police they “want to die as martyrs,” a lawmaker said.

Meanwhile, a gunman suspected in the killing Thursday of a policewoman and who has been linked to the two brothers in the Charlie Hebdo shooting has taken at least five hostages at a kosher market in eastern Paris to defend “oppressed Muslims” notably in Palestine. A police official said he had threatened to kill the hostages if police launched an assault on the cornered brothers.

Paris police released a photo of Amedy Coulibaly as a suspect in the killing Thursday of a policewoman, and the official named him as the man holed up in the market. He said a second suspect, a woman named Hayet Boumddiene, is the gunman’s accomplice.

Police have ordered all shops closed in a famed Jewish neighbourhood in central Paris, far from the two developing hostage situations.

The mayor’s office in Paris announced the closures Friday of shops along the Rosiers street in Paris’ Marais neighbourhood, in the heart of the tourist district and about a kilometre away from the offices of newspaper Charlie Hebdo.

Meanwhile, fears were mounting that anti-Islamic sentiments will intensify across Europe – namely, Germany, Italy and Switzerland – in the wake of the Paris attacks, wrote Angelique Chrisafis, Kate Connolly and Stephanie KirchGaessner:

In the light of the growing Pegida movement – a grouping of disillusioned citizens, neo-Nazis and football hooligans who oppose Muslim immigration and have been backed by the anti-immigration party Alternative für Deutschland (AfD) – the debate in Germany since the attacks in the French capital has been particularly nervous.

Lots of Muslims are forgetting that if they do not give their religion a better voice in Europe such organisations trying to bring terror over Europe shall do much more damage to the relations between Muslims, Jews Catholics, Protestants and other believers. They should become aware that because of the bad name jihadists are giving to Islam several populist and anti-immigrant parties are gaining support in the polls across Europe, have been quick to make political capital from the attacks, citing them as proof that all their fears about Islamism were true.

“This bloodbath proves that those who laughed at or ignored the fears of so many people about a looming danger of Islamism were wrong,”

said Alexander Gauland, a regional leader of Eurosceptic Alternative für Deutschland (AfD), which has its roots in the euro crisis and is currently riding at 25% in nationwide polls, on the day of the Charlie Hebdo attacks.

Moving quickly to capitalise on the Paris attacks, AfD and Pegida leaders said the mass shooting showed that concerns about Islam did not amount to racism. But mainstream German politicians dubbed “disgusting” what they viewed as an attempt to put Muslims under “general suspicion”.

An acronym for “Patriotic Europeans against the Islamisation of the Occident”, its Monday evening marches have mushroomed to attract about 18,000 participants weekly. Leaders have used the demonstrations to rail against violent Islam and demanded tighter immigration and asylum rules.

Chancellor Angela Merkel and her government have condemned the grassroots movement Pegida, or Patriotic Europeans Against the Islamisation of the West, which drew a record crowd of 18,000 to its latest rally on Monday in Dresden.

“The Islamists, against whom Pegida has been warning over the last 12 weeks, showed in France today that they are not capable of (practicing) democracy but instead see violence and death as the solution,” 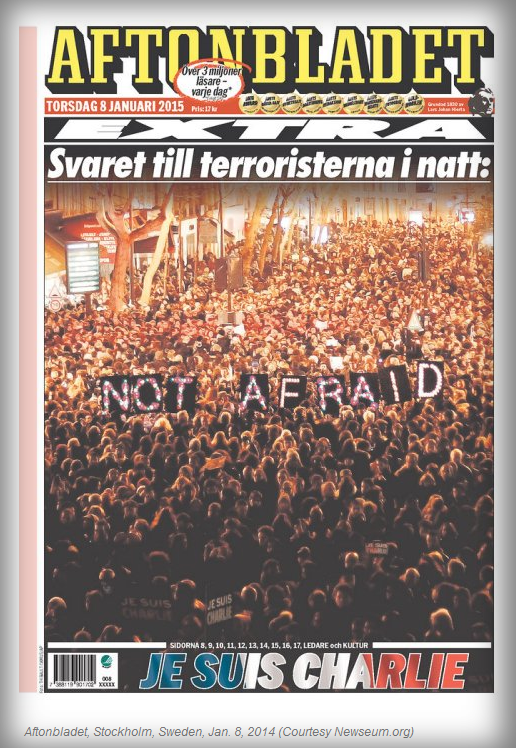 5 Responses to Being Charlie 3