Honouring hundreds of thousands of victims of the brutal Somme battle 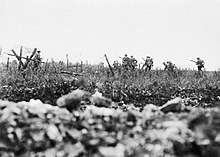 British infantry from the Wiltshire Regiment attacking near Thiepval, 7 August 1916, during the Battle of the Somme.

Today, July 1 of the year 2016, 15 minutes later than planned a moving Commemorative Event for the Battle of the Somme started at Thiepval a commune in the Somme department in Picardie in northern France.

Once more Europe can see why the European Union is so important and how we all should join hands to avoid such terrible disaster Europe had to face 100 years ago.

Even so many years later I could not keep my tears away hearing several letters read by family members and beautiful texts and songs being presented by the professionals of the world of arts. Though Celtic songs got me goose pimples, this event is a necessary witness of the unity there was and still has to be. Too many lives were lost in the disaster that cut in the silk sheets of Europe.

Prince Harry, the Duchess of Cambridge and the Duke of Cambridge bow their heads in Thiepval Credit: Chris Radburn/PA

Organised by the Ministry for Culture, Media and Sport on behalf of the British Government, the Mission du Centenaire on behalf of the French Government, The Royal British Legion and the Commonwealth War Graves Commission the Duchess of Cambridge, Prince Harry, Prince Charles and the Duchess of Cornwall attended the service at Thiepval Memorial in France with Prime Minister David Cameron and French President Francois Hollande, other leaders and many people to honour the hundreds of thousands of victims of the brutal offensive, which started in northern France on July 1, 1916.

Great Britain was present with the royal party who met 24 of the 600 UK, Irish and French schoolchildren taking part in the commemorations and an Anglo-French educational programme organised by the British Council, which includes a week-long residential stay in the region.

As she toured a new museum dedicated to those lost in the bloody battle, to those youngsters the Duchess told her visit to the Somme to be “emotional”.

“It’s important that you are here. There are all sorts of parts of history that are being forgotten.

Such commemorations are good to remember people and it is necessary for the youngsters to come in contact with the history of our nations.

“It’s important for us to remember older history as well as more recent history. I’m actually quite jealous of you guys getting to spend five days here learning all about it.

the prince said. Such initiative are much better than the school-trips just for fun, going to amusement parks. When I left my eyes going over those youngsters I sincerely had the impression they too were very touched and got involved in this ceremony. I only can hope they will go back to their mother-country with a huge amount of knowledge, like the prince thinks they will do.

“It is truly terrifying to imagine the destruction wrought across this landscape 100 years ago today. However, we now return to the battlefield in a spirit of reconciliation and respect.”

The Duke and Duchess of Cambridge and Prince Harry during the commemoration of the Centenary of the Battle of the Somme Credit: Andrew Matthews/PA

When you see the peaceful country now you see the huge crater of the new explosive material (I think 22 meters wide and 5 to 7 metres deep) Although the German Front Line and rear positions were damaged by the Allied artillery during this time, and the Germans’ nerves were severely tested by the end of the seven days, the German barbed wire defences were not as badly damaged as had been intended. The allied forces thought this explosion would frighten the Germans and have them flee, but when the English went forwards they were mown down by machine guns.

The preliminary bombardment lasting seven days from 24 June to July the 1st did not have the hoped result for the British, so when they stormed the fields to drive away the enemy the Germans surprised them and brought an incredible amount of victims to thirteen divisions of British forces which launched an offensive on a line from north of Gommecourt to Maricourt at the River Somme. South of the river the attack was made by the French Army.

Speaking about his visit to the top of the memorial, Prince Harry said:

“You get a real perspective of what happened, going over the top. None of us can imagine what that was like.”

That is the worst problem with war, that nobody can really feel what it is and what an impact it makes, when not having been in contact with it. though our governments task is to take care that none of our children their children will have to face such terrible situation.

Thiepval Memorial to the Missing, viewed from the west side, with French graves of the Anglo-French cemetery in the foreground

From letters being read we can imagine the ground over which the British were trying to move north-eastwards which had been churned up by constant artillery bombardments, bodies from previous attacks lay unburied and decomposing. It must have been a nasty smell. From one commander’s letter to his parents we could hear how that man was concerned about his troops and how fear took over on the more quiet moments, having no time to fear on the active battle scene.

We also get to hear how they shivered in the cold, were soaked and saw enough rats and other vermin.

The diary of Major Francis Meynell of the disastrous day in which 19,240 British soldiers were killed and more than 38,000 wounded – the bloodiest day in the history of the British army – was uncovered in Staffordshire’s county archives. Meynell, from Burton-upon-Trent, was stationed at the northern end of the battlefield where the 137th Staffordshire Brigade attacked the German-held village of Gommecourt.

On the day of the attack, Meynell kept a diary of events as they unfolded from his position in a cellar in the nearby village of Foncquevillers.

Meynell wrote his first entry at 6.25am. It simply read “bombardment begins”. By 6.47am, he noted “the drift of shell smoke” obscuring important landmarks. At 4.34pm, after 10 hours of battle, Meynell reported:

These men appear to have behaved extremely well under great difficulties.

In an address written by Birdsong novelist Sebastian Faulks, Prince William highlighted the almost 60,000 British and Commonwealth casualties of July 1 1916, the bloodiest day in the history of the British Army. He told the assembled guests:

“We lost the flower of a generation; and in the years to come it sometimes seemed that with them a sense of vital optimism had disappeared forever from British life.

It was in many ways the saddest day in the long story of our nation.”

Bangor grammar school in Northern Ireland, twinned with the Lycée Thuillier in Amiens, had their year 10 pupils come together to remember the 37 of its former students who were killed in the conflict, but also to show their respect for those who fought for their country. 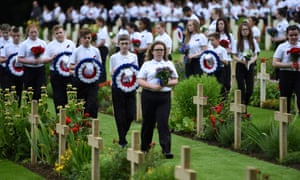 Nicola Sturgeon called for reflection on the “horrors of the Great War” as she attended the remembrance event at Thiepval. She said:

Barely a single community in Scotland was left untouched by the battle. Across Scotland communities are now remembering those who gave their lives, and a whole century on from the devastation and suffering of the Battle of the Somme, we should all reflect on the horrors of the Great War and give thanks that our continent now lives in peace.

When looking at the present crisis in the European Union we should be aware that only by the regular talks, the will to sit around the table, we have to acknowledge the failures of European governments to prevent the catastrophe of the two world war but also have to see how they managed to have already a period of 70 years that there was no battle going on between countries in these regions. On that point alone the European Union has already shown its use and its necessity.

Please ignore the animation at the beginning and forward to the France 3 Retransmission at 19:15

100° birthday of war and war tourism

2015 Persons and groups of the year

Ulster Tower ceremony for the Irish at the Somme battle