In Rio de Janeiro, and not the new national capital Brasília, on Friday night August the 5th 2016, after seven years with a lot of power of money oppressing the poor, having put many out of their houses like it happened also in China and Russia. Though one man was still living on his derelict house he de not want to move out.

LET THE GAMES BEGIN A boat of the Navy of Brazil is pictured with the interlocking Olympic Rings colored blue, yellow, black, green and red as it patrols the coast of Copacabana beach in Rio de Janeiro, a day ahead of the Rio 2016 Olympic Games. AFP

11 000 top sporters found their way to a country in real as well economical Winter where the temperatures still reached 30° Celsius. From 206 nations and a refugee team they came to Brazil to compete in 28 sports and be watched by a global audience of billions. Opening night reaching 3 billion people for a marvellous show. 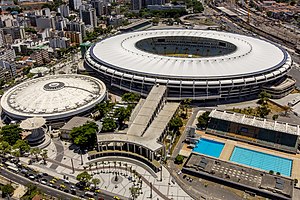 Aerial view of the Maracanã complex in 2014, with the stadium visible at top and the Maracanãzinho at left

In the midst of its deepest recession since the 1930s, employment is above 10 percent, and the local currency having tumbled in value against the dollar in the last year, tourists may not see much of all the trouble, because the country has done everything to hide the misery. Though even as the celebrations continued at the big Maracana stadium, a small group of protesters have been stopped by heavily armed security that appeared to fire tear gas to keep them from reaching the venue of the opening ceremony. The protesters got within about 2 kilometers (1.5 miles) of the Maracana, but as they tried to get closer, security pushed them back, setting off clashes.

In a lovely choreography the history of our earth and Brazil was shown. Very good was it to see that much time was spent to give a necessary warning to mankind. For this were pictures of Nasa used. With scientific proof, Brazil showed how the damage in their own beautiful country also contributed to a coming disaster for future generation and how we have to call it to stop, people demanding so much of mother earth. the participants of this games will also be contributing by each offering one seed for a tree of the first Olympic forest.

For the first time South America may host the modern times Olympiad and Brazil showed the world it is ready for it. Three billion people could watch the ceremony, which has taken five years to produce and included 300 dancers, 5,000 volunteers and 12,000 costumes, and showed the world that with only 10% of the money spend in London they could make a more interesting show.

Even as the line of the participating nations waiting in the stands ran out, two were left at the back of the line. Host nation Brazil and another contingent. One that was also making a debut of kinds at the Games.

The ‘refugees’ walked out under the IOC flag but their smiles were no less brighter. Syrian refugee Yusra Mardini’s in particular. The young woman has stolen hearts already with her story of how she swam for her life when her overloaded dinghy started taking in water as her family crossed the Mediterranean to Greece.

Along with another refugee Yusra jumped in the sea and pulled the boat for three hours through the water, saving the lives of 19 others.

With fans chanting in unison, Brazil entered the opening ceremony for the Rio Games and was welcomed with long and loud cheers from the 60,000 or so inside Maracana Stadium.

Due to health reasons, and having other commitments, football legend Pele got replaced with Brazilian marathoner Vanderlei De Lima to lit the cauldron at the Rio Games. Gustavo Kuerten carried the torch into the stadium, then handed it to Brazilian basketball legend Hortencia Marcari. She brought it to the stage, then De Lima brought it up the stairs and held it aloft for 60,000 to cheer.

Brazilian officials wanted this cauldron smaller than most, a reminder to reduce global warming caused by fossil fuels and greenhouse gases. The flame is housed in a giant sculpture, with spirals to represent the sun.

Sunlight may perhaps come in many hearts having an incredible occasion to gather with so many nationalities, spending preciousness time and exchanging ideas with each other. they not only will be competing with each other. They’ll know they all are of a similar calibre, the best in their ‘job’. but more important, so different from culture, colour of skin, having such different attitudes, they will feel that they are equal.
That is also what was in the mind of the President of the International Olympic Committee, Thomas Bach, who said these Rio Games will promote peace.

“We are living in a world of crises, mistrust and uncertainty. Here is our Olympic answer: The 10,000 best athletes in the world, competing with each other, at the same time living peacefully together in one Olympic Village, sharing their meals and their emotions.”

Bach added that in this Olympic world, “we are all equal” — words that were met with applause and concluded his remarks by presenting the first-ever Olympic Laurel to Kipchoge Keino, a two-time gold medalist from Kenya who went on to open an orphanage in his homeland. Incredible that this man got still so much energy to put in his created project to help youngster in his country and bring different possibilities to have good sports,  cultural and educational training.

President of the Rio 2016 Committee Carlos Nuzman was very enthusiast and had his nerves playing with him, but got ‘his’ Brazilians full of fire, with only one moment of booh-shouting when he mentioned the government.

Carlos Nuzman, President of the Rio 2016 Committee, smiles as IOC President Thomas Bach, left, looks on during the opening ceremony for the 2016 Olympics. (Photo: AP)

Find also to read and see many photographs: