This past year we have seen how certain people tried to do everything to get another person in the bad light. All tactics where used to bring negative news in the ether. Members of certain political groups did not mind tearing down ‘colleagues’, calling them names and trying to pulverise them in public. 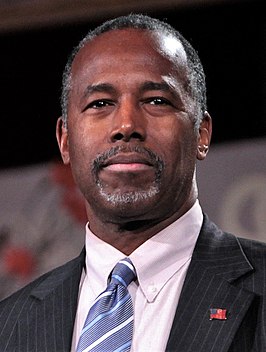 Even a reluctant politician who is really concerned about saving the American nation, (probably) because of his coloured skin, was by a much broader man from his own party laughed at and ridiculed. Though also speaking his mind Ben Carson did not come up to the word-waterfall of the person who should have been his team mate.

Ben Carson, who saw as the dangers of Political Correctness, suspended his campaign at the CPAC conference in Maryland on March 4, 2016. It looked like many did not want to know of Carson’s political traditional views which seemed to be infused with common sense. Seeing that the national debt of those states, other countries jealously look at, is incalculably excessive, he proposes a flat tax – just and correct, in his estimation, because it mirrors the Biblical mandate of tithing – as the solution.

For the other interesting candidate with very good propositions it is clear that at this time of massive wealth and income inequality, the Americans need a progressive tax system in their country that is based on the ability to pay. Like it is unacceptable in Belgium and other countries that major corporations pay nothing in federal income taxes, and that corporate CEOs in the country often enjoy an effective tax rate that is lower than their secretaries, in the Western World we should start stopping to pamper the rich, making them even wealthier, propertied at the cost of the hard working lower income group.

In the U.S.A., Belgium and other European countries we can see that the middle class is depleted and less people are willing to take the risk starting a new business, not receiving enough cheep money because the citizens do not get enough interest on their savings and are penalised when buying shares, having to pay over and over taxes on each transaction and gain (but Belgians cannot deduct the losses from their taxes).
With good reason the democratic party man asked for democratic measures demanding the wealthiest Americans and largest corporations paying their fair share in taxes. Naturally the wealthy man good in his skin had enough reason to stand up against this man which he also called a communist. A typical trick to call everything what smells a little bit to social to pull the machine-gun.

According to Ben Carson

“It is obvious that the media has decided who the winner of this election should be; but by so grossly overplaying its hand, the media has lost all credibility as a source for objective facts and surrendered its role as a neutral arbiter of political discourse.”

Worse is also that the media were manipulated by offices which should take care everything is under control. But the FBI bringing out news just to undermine a candidate or to bring tumult in the race is unheard of and should not be done. What would people say if by an investigation about some one everything is brought in the news before anything is known for sure or even when the investigation does not go about that person?

The man who in the past has given money to both parties, according to whom suited him best for his needs, now has taken over the strings and has played Punch and Judy, with the real life marionettes of the republic as well as of the democratic party. Several democratic party members were so caught up in their own egos they failed to see how Trump drove a wedge between the republican party members.

Strangely enough people like Carson suddenly came into the defence of their attacker concerning his misconduct with women. But he was right in saying

“It doesn’t matter whether they’re lying or not. What matters is that the train is going off the cliff. We’re taking our eye off of that, and we’re getting involved in other issues.”

All time everything was done to get the eyes and minds away from real political, economical, social and welfare issues. From Trump we nearly never heard him to go deeper in the real issues and presenting his projects. Clinton at the other hand gave enough time to see in her cards and allowed people to think about what she is proposing and wants to have done when she becomes a president. Her party has a real program ready – or that is what we are made to believe, and which I think all can believe they will be ready to tackle the presidency on an international diplomatic level. Hillary Clinton has the experience and knows how many beans go to the dozen.

The man who wants her imprisoned and shall take care she and all other of his opponents shall be tampered with when he becomes president, has already been lashing out at anyone who did not show enough loyalty to him. He also detached himself from and de-legitimized the institutions of American political life, calling the system rotten. If he would be able to show where the system goes wrong and he is also not involved or on that same rotten line, there would not be such a problem. He in the previous years as made well use of that system that could provide protection for all his lucrative businesses. He was able to misuse foreign workers to have the work done cheap for him, and he agreed he went to the roof when his food was not ready when he came home or when it did not go to his likings. Dangerous also is that he is proclaiming conspiracies everywhere — in polls (rigged), in debate moderators (biased) and in the election itself (soon to be stolen). But he wanted the people to believe they did not need an election because when Hilary wins that would be the proof all is screwed up and that is all one fraud, so they better had to take him straight away, without voting, to make him the next president of the United States of America.

Pulsating with grievance and vitriol, unmoored from conservative orthodoxy, and deeply suspicious of the fast-changing culture and the consequences of globalization, at no point ever having shown to have a good knowledge about foreign policy, nor diplomacy, he not only broke down people outside the republican party. He managed to show the world how fractured and unconsistent the republican party has become, because so many were so much busy by trying to save their own skin in the hope to get some place when Trump would be on, that they forgot to think in union for the party. Fearing for their own life they gave up the credibility of the party.

Though I am not quite sure of his following saying

“Trump has now shifted to a mode of complete egomaniacal self-indulgence. If he’s going to go off with these merry alt-right pranksters and only talk to people who vote Republican no matter what, he’s going to lose the election substantially.”

A bigger problem which shall rise is that when trump looses it shall take a long time before the wounds of the republican party shall be healed.

As a nation the Americans may find themselves so divided as to be broken. By all the actions and all the storms and fires Trump ignited the American citizens are so divided that they have never before experienced and which many do not realise the cracks are really as terrible as the sounds he made.

Now we have the constituents of one political party so consumed by hatred that they will go along with their party’s vow to, in effect, tear up the Constitution. This hatred has been stoked by a cynical Republican Party so desperate to hold onto power at any, and all, cost that they are willing to inflame the fears of their base with unfounded rumor, lies and innuendo promoted by an eminently unqualified candidate who has both encouraged gun owners to do “something” if Hillary wins, and encouraged Moscow to hack our election – and, who embodies the very worst in us. {Despicable; The Republican Legacy}

American know best how much they can trust the sayings of their parties. But we in the West saw already how they worked against Barack Obama and made him life difficult. In case the Republicans are going to do what they promised, Americans shall come to face a terrible difficult time. They made it quite clear that if Hillary Clinton is elected President they will not let her govern, they will not consider her Supreme Court appointee and they will, in fact, block any of her initiatives – and they will hold hearings with the expressed intention to impeach.

By all the mud which has been thrown, all the indecency that went on, all the interfering of intelligence forces and secret agents interfering with internal political matters, made this election a turning point in the American history, proving how much democracy has been turned upside down. Also the previous events made that the people in charge of the country shall have to proof again to the public that it is serious business for them and not just a game of getting the highest position to do whatever they want for gaining the most amount of money no matter if the ordinary citizen has to kneel down for it and give in a lot of his earnings and has to face walls around boarders and not receiving certain foreign products any more because of bad relations.

In case the person with the biggest tongue, who has constantly spewed racism, lies and insults towards Hillary Clinton, immigrants, women and anyone who disagrees with him, and has brought the Americans to the this pinnacle of a culture of hate, wins than the West also would have to take a careful attitude concerning the diplomatic arrangements to be made in the near future. Like the Brexit voters awakened after the British election it can well be that Americans also could awaken in the next nightmare, having their so called ‘saviour’ showing his real face and letting all what he promised aside like a ‘good joke’ they would not have had to believe, like Nigel Farage also told the population they could have know he could not provide all that money for social security or give all those things the public wanted.

But even when the Americans show their lucid mind their country, its ability to govern and be governed by law, has now been so damaged by the Republican Party that it will take many decades for them to recover. As ever they will do, but like by any war they’ll come out of it very handicapped.

22 Responses to When so desperate to hold onto power