2016 in review Politics #1 Year of dissonance

2016 year of dissonance, despair, where all certainties were brushed away

When Israeli commandos in 2010 intercepted a flotilla of ships seeking to break Israel’s blockade of Hamas in the Gaza Strip a diplomatic rupture broke several contacts in the world. There was a six-year-long deep freeze in relations between Turkey and Israel which this summer formally ended and Turkish-Israeli ties seemed again flourishing in 2016. While Israel has made diplomatic inroads with India, Southeast Asia, Egypt and even Saudi Arabia, Erdogan has made himself persona non grata not only in Syria and Iraq but also in Egypt, Libya, Saudi Arabia, the United Arab Emirates and even the Palestinian Authority, which resents his embrace of Hamas.

By now the whole world could see that Erdogan sees utility in deals only so long as they conform to his interest and uses people for his own good as long as it can last. As soon he does not need them any more Erdogan does not mind calling the previous co-worker an opponent of the state or a terrorist who has to be killed and/or whose movement has be made to an end, like the Gülen movement. The Turkish preacher Fethullah Gülen, who after his dispute with Erdogan went to lived in the United States since 199, has been the bogeyman for Erdogan.

We are not sure if it was really a failed coup in July are a very well orchestrated action by Erdogan to enlarge his power and to make him more loved by the majority of Turks. Erdogan may have changed Turkey forever, having taken it away from the secular state the great visionary Atta Turk envisioned.  Though even as he has consolidated control, he seems to have the support of no more than 50 percent of the electorate; Turkey remains divided between traditional Muslims, not all of them sympathetic to Islamism, and the urban, secular elites.

Present day Israel has discarded the rational, the universal and the visionary. These values have been subordinated to a cruel and oppressive occupation, an emphatic materialism, severe inequalities rivalling the worst in the western world and distorted by a fanatic, obscurantist and fundamentalist religion which encourages the worst behaviours rather than the best. Right wing control in Israel in 2016 became stronger and more entrenched than ever, whilst in Europe and in the United States the Jews became looked at again as they are the cause of our economical crisis and as if they are a fungus to be destroyed.

Jews, Muslims, asylum seekers and communists were mentioned by several politicians as the cause of the mess the European Union and the United States of America. Those politicians try to blind their folks. They do everything so that the citizens would not come to realise that it are they and the 1% of richest people and their millions of allies in the upper levels of banks and corporations, media, academia, law, government and politics, who have developed a neo-liberal economic strategy that has resulted in massive loss of jobs and a triumph of the values of materialism and selfishness in daily life. Everywhere we can see those who really brought the dung to us now trying to blame everyone else for the global mess they have made. 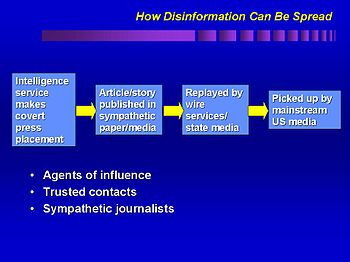 How Disinformation Can Be Spread — explanation by U.S. Defense Department (2001)

2016 was the year experts and media did not know it any more and where prognoses, polls and bookmakers could find the unexpected to come true, nobody ever would have thought the British would vote for a Brexit or that Donald Trump would make it to president elect. Social media seemed to have thrown in the towel of disinformation and continued breaking down the credibility of persons. Ethics, old fashioned Judeo-Christian values not count for much. sincerity and honesty was of little account for many even politicians or those who were considered to lead the country commanding little esteem.

With the fall of the Berlin Wall West Europe thought it could enter a new decennial of freedom, but now we have seen many put up walls up again, and this time not only in Europe but also in Israel and the U.S.A., plus the Putin State demanding its right to govern in the world, like the old Soviet Union, making sure that those who do not comply with the system are silenced for ever.

Anno 2016 there are again people who are believing those guys who promise them an heaven on earth and give them the hope or so called assurance that they are the man to make the country great again. Lots of people ask to give the elected one the chance to proof himself. Danger is that in 2016 we were going into a phase of nightmare which is going to end in a worse nightmare. At the moment still lots of people believing in what the British prime-minister Neville Chamberlain in 1938 also still believed that there would be a

peace for our time

This time though we see more than one figure standing up, having no respect for the truth, nor to respect others, not having any respect for human rights, not having any political decency. By the failing education system, media got free game and the aggressive bawler could let all his frustration and gut feelings infect those who were willing to be all ears for him and not willing to see the reality. The bogeyman managed to roar so much he could shunt many of his own political party who had perhaps much better ideas and better solutions for the country than him. He also managed to shut out the light by those who were insecure and those who preferred to stay loyal to their party instead using common sense.

In the Western countries at great length everything was done to have the people to feel they needed the politicians and the armed forces to keep everything under control, whilst the fear of terror could be fuelled not only by the acts of jihadi fighters but also by the newspapers and visual media following the stream of paranoid anxiety state. In several villages all over Europe we could see that “democracy” has become a very tiny veneer and having politicians as wolves in sheep’s clothing assuring their position.

February 26 (Hannover), March 22 (Brussels) June 13 (Magnanville), July 14 (Nice), July 26 (Saint-etienne-duRouvray) August 6 (Charleroi), October 16 (Hamburg), December 19 (Berlin) were terrorist acts linked to IS, which did not get us on our knees, but showed the solidarity of the Europeans willing to continue their life with our European values, in a place which should be there for all to live in peace.

But all the fearmongering and those Islam fundamentalists trying to bring all religions in discredit, made several politicians seeing the opportunity to go against certain religious groups and against the freedom of clothing and freedom of religion. Many politicians saw it an ideal occasion to get the eyes away from the bad economical situation and the job-insecurity. At the 2014 elections the community and religious issues where totally absent. Now the outrage shaves high peaks within the so-called values and norms debate. At regular intervals we could see a grim atmosphere, where many discussions or debates over basic principles got heated.

The most idiot right wing measure taken was the prohibiting of the burkini, clearly also showing how politicians where very clever in misleading the people and how many where carried away in matters the politicians wanted them to believe but did not make any sense. On French beaches enough nakedness had to be shown or one was not allowed to be there, whilst on Facebook false news pushed away the real news and naked breasts got censured. Problem today is that not many people are interested in reading a good newspaper, but are much more interested in looking at all the gossip on Facebook. Social media are the alternative and the politicians got to see that it may be a very handy tool for them to gain popularity. they do want to get control over what can count as a ‘fact’. They also try to get as many likes as they can, and do not mind to distort the truth. We saw many in Europe and America to stretch the truth.

15 Responses to 2016 in review Politics #1 Year of dissonance