European politicians shall have to show its true face to the Europeans who look for a democratic and free Europe.

Spain’s Supreme Court prefers to neglect the democratic Catalonian votes, which were already expressed in difficult times, the Spanish government doing everything to block it.

In total, Supreme Court Judge Pablo Llarena indicted 25 former officials and pro-independence leaders on charges including misuse of public funds and disobedience. He also ordered the main group to pay back €2.1 million to cover the cost of last year’s referendum, which Madrid declared illegal, and court costs.

Spain is doing everything to loose its credibility to be a democratic country and brings the European Union in danger, because lots of Europeans shall loose trust in it when nothing is done against the imprisonment of the Catalonian politicians. 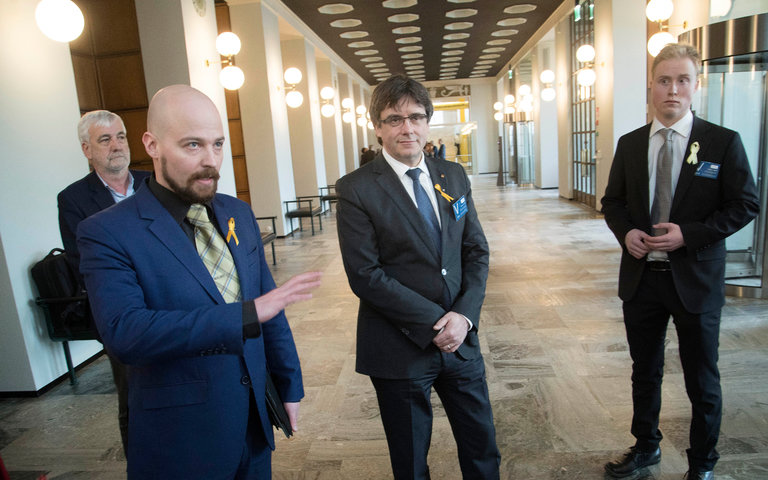 On his way back from Finland to Belgium former Catalan leader Carles Puigdemont, when he crossed the border from Denmark, has been arrested by police in Germany, from where he risks being extradited to Spain to face charges of sedition and rebellion and faces up to 30 years in prison if convicted.

In the previous months we have already seen how Spain boycotted the referendum and tried to make it impossible for Catalonians to bring out their vote. The Spanish governement clearly went in against democratic rules of freedom of opinion, freedom of expression, and of freedom of political colour.

In the previous months Puigdemont was always prepared to be there at the disposal of Belgian justice. Puigdemont had evaded capture in Finland and slipped out of the country after it became clear Finnish authorities intended to act on the warrant activated by a Spanish Supreme Court judge to launch an extradition process to Spain.

Today, Monday March 26, Mr Puigdemont is expected to have to appear before a judge who will ask him if he agrees to be extradited to Spain.

Albert Rivera, leader of the pro-union Ciudadanos party, who has been a vocal critic of the ousted president and his independence allies, tweeted:

“Coup leader Puigdemont’s escape has been brought to an end.

“There should be no impunity for someone who tries to destroy a European democracy, flout democratic laws, fracture co-existence and misuse public funds to do so.

“The justice system has done its job.”

But it was never the intention to destroy the European democracy. The opposite the Catalonian politicians wanted to give the people of the regions affected the right to express their vote. Already in October last year, when the referendum was held, we were witnesses how Spain tried to silence the voice of many Spanish and Catalan people showing the world a horrific violence by the Spanish police against the Catalans.

Puigdemont’s arrest follows the imprisonment of a number of other senior Catalan politicians, including the former vice president Oriol Junqueras and the former minister of the interior Joaquim Form who have been in prison since the second of November on a charge of rebellion.

Maria Carme Forcadell i Lluís, former President of the Parliament of Catalonia, as well as a Catalan high school teacher, known for her Catalan independence activism.

It may have been no surprise when the former speaker of the Catalan parliament, Carme Forcadell, was also imprisoned on the same charge.  Once more showing that Spain wants all those who uttered their voice for Catalonia should be silenced.

The Prime Minister of Spain since 2011, Mariano Rajoy refuses to acknowledge the election results and the tyrannical behaviour of Spain towards Catalonia continues. Strangely enough not enough European parliamentary members reacted against the violence and undemocratic attitude of Rajoy.

Jordi Sànchez i Picanyol Catalan political activist, who has been president of the Catalan National Assembly (ANC) since May 2015

Two senior figures in the broader independence movement, Jordi Sànchez (Picanyol) of the Asamebla Nacional Catalana and Jordi Cuixart of the cultural organisation Òmnium Cultural have been in jail since October last year. Amnesty International has described the imprisonment of Jordi Sànchez and Jordi Cuixart as excessive and disproportionate. Both have been charged with rebellion and sedition. this happening in our contemporary European Union should make us as citizens of the Union very worried, because it may be a sign that the MP’s of the EU have an other agenda than the well-being of the inhabitants of the European Union.

The presidents of Òmnium Cultural and ANC, Jordi Cuixart and Jordi Sànchez, on top of a vehicle during the protests in front of the Catalan economy department on 20 September 2017 in Barcelona.

Catalonia has been in political turmoil since its leaders formally declared independence in October and the central government ousted them, assuming direct control of the wealthy autonomous region. As we all can imagine Spain being afraid to loose a wealthy area.

Now, with Spain renewing its efforts to have the former Catalan officials arrested and returned home for prosecution, Europe may be about to become more embroiled in the conflict.

Whether Spain’s newly aggressive posture would weaken the independence movement or strengthen it was not immediately clear, but Spain is pushing it so far that the independence movement can grow faster and that many Catalan people who previously also felt Spanish now feel Spain has betrayed them and does not want to recognise them and as such start throwing away or not wanting any-more, their Spanish citizenship.

In Catalonia, the effect of Mr. Puigdemont’s arrest was immediate. Protesters took to the streets of Barcelona and clashed with the authorities. Riot police officers in Barcelona shoved and struck protesters with batons to keep an angry crowd from advancing on the office of the Spanish government’s representative. Police vans showed stains of yellow paint reportedly thrown by protesters.

Prime Minister Mariano Rajoy of Spain did not respond immediately to Mr. Puigdemont’s arrest, but Albert Rivera, leader of the anti-secession party Ciudadanos, welcomed it (as can be seen above).

Roger Torrent, the pro-independence speaker of the Catalan Parliament, went on Twitter on Sunday to urge fellow Catalans to form “a common front” to defend individual and collective rights.

“pre-trial detention should be considered a measure of last resort“

referring to Catalan politicians and activists arrested after the independence referendum.

But now it is high time for the European Union to raise her voice and for ticking Spain on its fingers. If the Union does not take urgent directions to have those politicians liberated, it shall loose more credit by the general European citizens all over West Europe, which shall bring the Union in a far worse crisis than the one we had a few years ago with Greece.

It is not the moment for the Union to loose its credibility to be a democratic Union with the right of free political thoughts or free expression.

If you believe in Democracy, you will support the Catalans who have been oppressed for centuries by terrible governments who abuse their people and use their resources and money for their own benefit.

Spain continues to hold illegally many political prisoners who held office in Catalan’s parliament and refuse to release them.

Catalonia contributes 22% of Spain’s taxes because of this Spain knows its already failing economy would plummet if Catalonia becomes its own country. {Carlos Puigdemont Arrested Near German Border}

At first the Catalonians would have been happy to be a federal state in the Spanish confederate, but now Spain has done everything to ruin that dream and to force the Catalonians even more to total independence.

In conclusion, the people of Catalonia have the self-determination and the resources to become a country and the EU and other world powers must see this and back them against Spain.

The world needs to see what is going on and see the atrocities committed against this peaceful people and stand up for human rights. We as individuals must bring the heinous behavior of the Spanish government and Rajoy to the rest of the world. As they say, “Knowledge is Power” and “The Pen is Mightier than the Sword.” {Carlos Puigdemont Arrested Near German Border}