Looking at what got me more quiet or not going deeper in American and other politics the last few months, I got distracted by a snuff in power and got to spend more words at him than originally planned.

In the Spring I got an inflamed small brain resulting not enough oxygen going to my brains. I now take some blood thinners though I still have the impression I have more difficulty to remember things than before. Last year was also a busy time in hospital for several inspections, though clearing me from cancer, letting me know that all those old anti-immune illnesses I have, did not want to abandon me by becoming older. No matter, I just have to live with them …. (increasing some medicine) ….

Probably not much changed. – Yet – 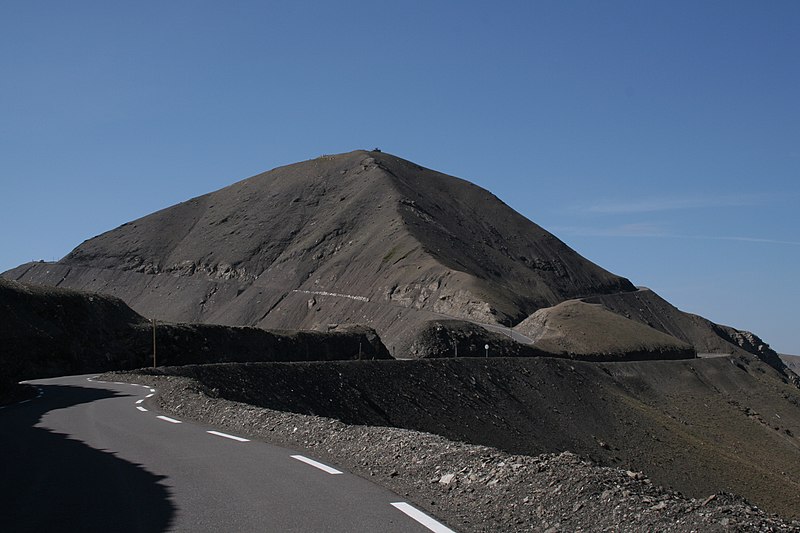 This year I had not prepared articles for the time I went abroad on holiday. For the first time we paid extra to have some basic internet, to have a connection with the outside world and to publish some articles at some religious sites. For the rest, I must admit, I took no notice of the political and economic world. 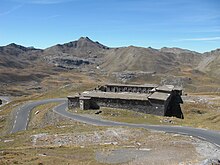 The road from Jausiers passes next to the Casernes de Restefond, an old military building.

At the places we visited it also gave the impression that if there would be war, nobody there would notice it, or would feel it, or would suffer from it. Except when we were on the Hautes Alpes, the department in the Provence-Alpes-Côte d’Azur region in Southeastern France, (Provence-Alpes-Côte d’Azur: departments of Alpes-Maritimes, Var, Vaucluse, Drôme + Hautes-Alpes) where on the top of the mountains we had magnificent views, but also saw lots of left overs of World War II. Just in time we did the trip from sea-level going up to the clouds along one of the highest roads in Europe: the main road D64 with numerous hairpins and tricky road surface reaching an altitude of 2802 m near the Col de la Bonette (2715 m) connecting the region of Barcelonnette to the Tinée and Vésubie valleys.

At 2700m altitude, around freezing temperature it seems that we have totally forgotten to take pictures where the position of the sun would have allowed it.
In any case we had wonderful views. For those who want hiking, provide enough warm clothing and provide your places to sleep well in advance. We had booked a nice place on the Pelgrim’s Road Via Alta Vista to Santiago de Compostela (or Camino de Santiago, Pilgrimage road to Compostela), a guest house situated in an old stable restored according to ecological specifications. For a one-night stand it was a little bit far away from the main road and our direction, but it is an ideal place to stay for a few days. We can recommend it to all those who want to escape the noise and business of this world.

At night when I went walking with the dog ice was forming on the road at 1075 m. The next morning we could see the snow at the places we had visited the day before. In winter it must be a lovely place to stay with such friendly host and hostess with interest in the quality of life and connection with nature.

Our 2018-trip went for a second time via Dijon to Lyon, this time giving time to the newer part of that nice city. Via Bourg-lès-Valence to Gréoux-les-Bains as base town to visit a.o the Gorges and Lac de Sainte-Croix (Lake of Sainte-Croix) this year going around the lake from the other site than last year.

After our stay in Gréoux-les-Bains we went further to the south, to stay in Saint-Laurent-du-Var visiting the region around there, and once more enjoying the beauty of Nice.

Back up – homewards via the above mentioned Route des Hautes Alpes via Venterol to the picturesque city Strasbourg (Strassburg), capital of Bas-Rhin département, Grand Est région, eastern France, located close to the border with Germany in the historic region of Alsace.

Having taken time to see many places and to enjoy nature, now back in Leefdaal, looking at the new academic year 2018-2019 I find it time to bring all those drafts which are still waiting to have something done with it, to a place for reading, in the hope they are of some interest for some people.

All the interesting photo’s of previous voyages, which also could be of interest for others I also hope to give a place at my Instagram account. (There I got stuck in 1992, so I am a few more years behind than here on WordPress.)  I notice I should find a way for Grambler working again to post my photo’s.

My promise for this year is than to come more up to date with my postings. I really hope to catch up on the time.