The organisation “Refugees Welcome Denmark” is a small, humanitarian organization based on volunteering which has as starting point the Refugee Convention and human rights and has as their primary efforts free legal advice and assistance to asylum seekers. At the same time, they are working to improve the refugee’s legal situation in general and to inform about refugee conditions in Denmark. and those conditions have become very bad.

Refugees Welcome uses their experiences to draw attention to general problems and document of the reality created by the politicians’ decisions for the refugees. they also participate actively in the public debate, and have succeeded several times in getting topics on the agenda and changing the conditions.

They too had to see how the government circumvented the prohibition of discrimination included in the UN refugee treaty through a legal quirk.

“The lower integration allowance applies to people who have not lived in Denmark for seven of the last eight years, including Danes,”

“There are almost no Danes in that situation.”

Kenneth Petersen of the Dansk Folkeparti (Danish People’s Party) says frankly that it is indeed meant as discrimination against refugees:

“First, we want to make it unattractive to come here. Second, we want to put them in a situation where it is in their own interest to become self-sufficient as quickly as possible. “

In other words: creating poverty as a deterrent and incentive.

“The asylum applications have indeed declined,”

“But curtailing human rights as a deterrent is not legitimate.”

And it doesn’t work as an incentive:

“The reason why refugees find it hard to find a job is that time is needed to adjust their skills to the needs of the labour market. The figures from the ministry itself show that. Putting them under pressure by forcing them into poverty won’t help. We are concerned about the children in those families. 64,500 children live below the poverty line. “

That is the new underclass of tomorrow, the refugee organization warns.

Danish Minister for Immigration, Integration and Housing Inger Støjberg – at her appointment as Minister for Occupation and Equal Rights

At the meeting I attended last Thursday it was presented as if it would be much better for the economy to use such cheap labour, giving the opportunity to produce more goods for less money. But what I can notice is that already in August, Støjberg and the Danish Ministry for Immigration, Integration and Housing used four Lebanese newspapers and social media to announce, in both Arabic and English, that benefits were being drastically cut for asylum seekers in Denmark and are allowing immigrants to work as slaves having them not being paid for the work they are allowed to do three days a week.

Støjberg wanted to use the ads as an unofficial information campaign to publicize the official changes that will affect refugees. Also creating such bad conditions for the immigrants who already reside in Denmark they do hope most immigrants shall soon be happy to leave Denmark. 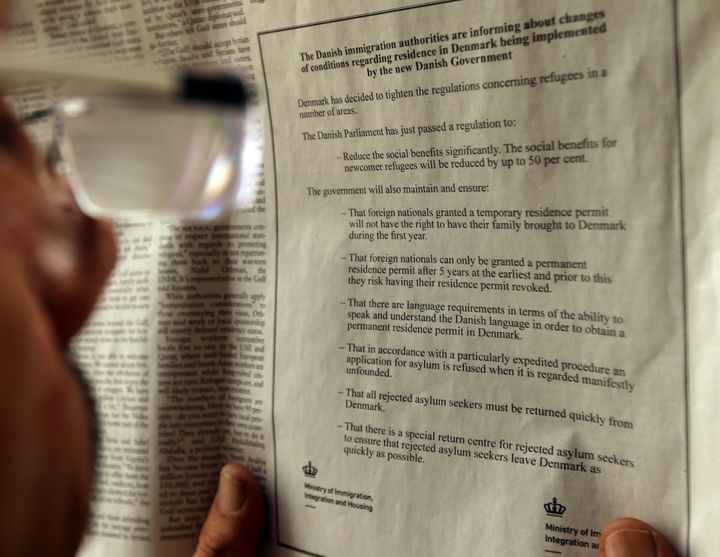 Joseph Eid/ Getty Images A Lebanese man looks at an advertisement published in “As-Safir” daily newspaper in Arabic by the Danish Ministry of Immigration and Integration to warn would-be migrants about new and tighter restrictions on those seeking asylum in the country on September 8, 2015 in Beirut.

The lower benefit has led to financial difficulties, social exclusion and poverty. It is unbelievable that in such a wealthy rich state we can find several people who at the end of the month do not make ends meet with food, clothing, school costs and health and transport costs. The right-wing parties made it that after-school activities are less accessible for immigrant-children.

At the meeting the speaker was not afraid to mention that by stigmatising the immigrants and putting them together in less interesting living quarters they could say that they form ghettos. Some of the families as such came to live in poor public housing of the municipality. Moisture spots, poor insulation, overcrowding.  But that would for the council be a good reason to get them out of those ghettos to return them back to their own country.

Nevertheless, the 2019 budget law reduces the integration allowance even further by EUR 270 per month, even though income was already below the official Danish indicator of relative poverty. That is a violation of the Danish constitution, which must ensure that the rights of citizens are not violated. In 1992, Parliament passed an Act adopting the provisions of the European Convention on Human Rights in Denmark. It agrees that many of the rules in the European Convention on Human Rights go further in their protection of human rights than is the case with the Danish Constitutional Act.

After all, the new scheme does not guarantee a decent subsistence minimum: in none of the families examined did the integration allowance combined with other support such as child support cover the cost of living according to Danish consumer prices.

Under the new budget law, many immigrants will have to make ends meet with € 380, and refugees will also have a lower child benefit in the first six years than their Danish neighbours. After paying the house rent of € 840 for the public municipal company, a family hardly has anything left (if they already manage to get so much money in the first place).

At the Danish Crown slaughterhouse (for example), the largest slaughterhouse in Europe which kills 20 million pigs every year there are  10,000 workers employed, including up to 170 Syrian interns. The municipality pays the wage costs of the company in the form of integration benefits to the refugees. The assumption is that the company hires the workers after the internship.

“Do you know how many got a job after a year and a half of free work?”

Thirteen. The company prefers to get new refugees in an internship. Many employers love such a scheme because it does not cost them anything. They give as an excuse that the refugees

But why do they let them work in internships for a year and a half and do they take new interns who do not speak the language well?

“In this way the companies save billions and refugees continue to go from one internship to another, for the ever-lower integration allowance. Eventually they become slaves. The intention is nevertheless to make them self-sufficient with fixed and correctly paid work.”

Kenneth Petersen of the Danish People’s Party in nearby Vejle responds:

“As long as companies receive free labour, they will use it. It is up to us politicians to impose rules on them. They should first take on unemployed Danes. Together with the trade unions, we have strongly opposed lower wages for refugees. Otherwise, companies hire refugees faster than Danes. And the internship system is the same. “

In the Scandinavian countries we see that distrust and hatred of refugees seem to have crept into integration policy. But in West Europe it is also a general trend to make the people afraid or suspicious of strangers.

The Danish author Carsten Jensen says that integration policy is not proactive, but controlling coercion. And Friis-Bach from Danish Refugee Council says that all decency in the social debate on refugees is gone:

“The tone is extremely loud. Every day we notice that many refugees feel extremely uncomfortable with the hostile climate in Denmark. “

And if we do not take care to give a right picture on what is happening here and do not take a right stance we shall not be able to stop the hostile climate sickening and undermining the European Union.

There are currently 29 ghetto areas. Once branded as a ghetto, residents are twice as severely punished for the same crimes. If the areas remain on the list for too long, they will be aborted. Residents, to the extent that they are not recognized refugees, are not entitled to family reunification.

The new Danish law will also stop family reunification for recognized refugees anywhere in Denmark from a certain number of applications. That will make the waiting times, which for many already run up to three years, even longer. Refugees who can no longer cope with the loss of their loved ones can then receive repatriation support. Also to Syria.

“That people choose to return to a country where their lives are in danger, simply because in Denmark they deliberately remain separated from loved ones and forced into poverty, is unacceptable for a rich welfare state like Denmark. “

Welcome Refugees decided to fight fire with fire, and counter what they considered to be xenophobic messages with more welcoming ones. The advertisement tells potential refugees not to heed Denmark’s scare tactics, with the above posting that states: “Dear fellow human being, there is another voice in Denmark – a voice representing peace, solidarity, and human decency,” and promises that “we’re not all like minister Støjberg.”