From the forgotten to publish material 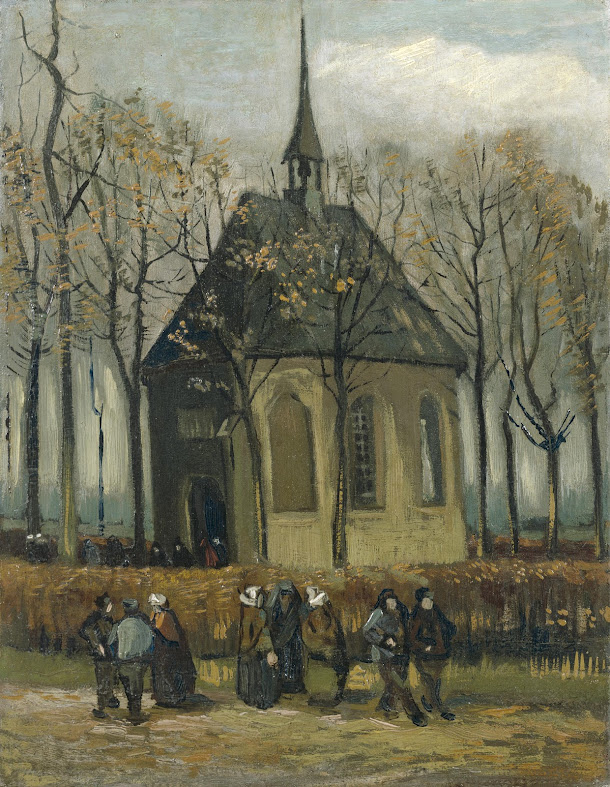 14 years after the paintings View of the Sea at Scheveningen, painted in 1882, and Congregation Leaving the Reformed Church in Nuenen, painted in 1884 by Vincent van Gogh, Italian police have found the two Van Gogh paintings wrapped in cloth in a safe in a house in the picturesque seaside town of Castellammare di Stabia, near Pompeii.

The works were among assets worth millions of euros seized from a one of the biggest mafia clans in the Scampia area of northern Naples.
Dutch and Italian ministers were overjoyed by the news, and praised Italian investigators.

Seascape at Scheveningen was one of only two seascapes Van Gogh painted while he lived in the Netherlands.

Despite a 14-year journey, the two paintings appear to be in fairly good condition. Both lacked their frames and showed signs of some damage. The painting Seascape at Scheveningen (1882) has the paint in the bottom left corner broken away on a surface of circa 5 x 2 cm.

Congregation leaving the Reformed Church in Nuenen is a small canvas that Van Gogh painted for his mother in early 1884. It shows the church of the Reformed Church community in the Brabant village of Nuenen, Van Gogh’s father being its Minister. In 1885, after his father’s death, Van Gogh reworked the painting and added the churchgoers in the foreground, among them a few women in shawls worn in times of mourning. This may be a reference to his father’s death. The strong biographical undertones make this a work of great emotional value. The museum collection does not include any other painting depicting the church. Moreover, it is the only painting in the Van Gogh Museum collection still in its original stretcher frame. This frame is covered in splashes of paint because Van Gogh probably cleaned his brushes on it.

Neither work was insured at the time, and both were on loan to the Van Gogh museum from the Dutch government. Two Dutch citizens were jailed for theft but always maintained their innocence.

Earlier in 2016, four paintings out of a haul of 24 stolen from a Dutch gallery in 2005 were recovered in Ukraine.

‘The Revenant’, about the American frontiersman and fur trapper who became a folk hero after surviving a bear attack and then travelling hundreds of miles alone to safety. as a American semi-biographical epic Western film directed by Alejandro González Iñárritu was the big winner in Golden Globes followed by the Hungarian drama film directed by László Nemes “Son of Saul,” which was was funded in part by the Conference on Jewish Material Claims Against Germany and had won the 2015 Cannes Film Festival Grand Prix. The Revenant won three Golden Globe Awards and five BAFTA Awards. At the 88th Academy Awards, the film received 12 nominations, including Best Picture and Best Supporting Actor (Hardy), winning Best Director (Iñárritu), Best Actor (DiCaprio), and Best Cinematography (Emmanuel Lubezki). DiCaprio also won the Golden Globe, Screen Actors Guild Award, BAFTA, and Critics’ Choice Award for Best Actor.

Being more techniques, it was a tool of art for several years on stage as well as in films. But on July 22 the final videocassette recorder was manufactured by the Japanese company Funai.

On January 1 the Hungarian-American cinematographer Vilmos Zsigmond, one of the leading figures in the American New Wave movement, died. (b. 1930) When Soviet armed forces arrived to crush the Hungarian Revolution of 1956, Zsigmond and another film student, Laszlo Kovacs, clandestinely filmed the carnage and then smuggled the film into Austria before immigrating (1957) to the United States.  He won the Academy Award for Best Cinematography for his work on Close Encounters of the Third Kind as well as the BAFTA Award for Best Cinematography for The Deer Hunter. He collected additional Oscar nominations for his work on Mark Rydell’s The River (1984) and Brian De Palma’s The Black Dahlia (2006). He won an Emmy Award for his photography for the HBO TV movie Stalin (1992), and he received an Emmy nomination for the TV miniseries The Mists of Avalon (2001). The American Society of Cinematographers honoured him in 1998 with its lifetime achievement award, and a 2008 documentary, No Subtitles Necessary: Laszlo & Vilmos, took as its subject the friendship and artistry of Kovacs and Zsigmond.

The world also lost the son of a steel manufacturer, who majored in mathematics at the Collège de Saint-Étienne, where he also took music lessons. He is best known from what he learned by the composer and organist Olivier Messiaen at the Paris Conservatory and his training in 12-tone technique by René Leibowitz, who had been a student of Arnold Schoenberg, the father of 12-tone music. The man who  created and directed the experimental Institute for Research and Coordination in Acoustics/Music (IRCAM), which was housed in the Pompidou Centre in Paris, became a “must to know” and giving the world one of the world’s most important contemporary music ensembles at that time. Nobody could get around or without Boulez in his education. Boulez became also one of the most prominent conductors of his generation. In a career lasting more than sixty years he held the positions of chief conductor of the New York Philharmonic and the BBC Symphony Orchestra, music director of the Ensemble Intercontemporain and principal guest conductor of the Chicago Symphony Orchestra and the Cleveland Orchestra. He also was conductor at the the Vienna Philharmonic and the Berlin Philharmonic,

First written as a six-movement composition between 1953 and 1954, published in that form in the latter year, “imprimée pour le festival de musique, 1954, Donaueschingen“, having it in a  revised order of these movements and interpolated three newly composed ones it got performed in 1955 as a music piece on the three short poems by Char with the title “Le Marteau sans maître“(The Hammer Without a Master) that influenced many artists. I and others, like Maurice Béjart used is also for ballet.
Pli selon pli (Fold by fold) was Boulez’s longest work that found its way also in the ballet world. It carries the subtitle Portrait de Mallarmé (Portrait of Mallarmé) and  is scored for a solo soprano and orchestra and uses the texts of three sonnets of French symbolist poet Stéphane Mallarmé and single lines from two other of his poems. In line with L’après-midi d’un faune (1876) and Trois poèmes de Mallarmé (1913) and Chansons bas de Stéphane Mallarmé (Darius Milhaud 1917) in the 1970 that poetry and those musical pieces were the works to build on and create many variations. As young dancers Béjart stimulated us to listen to those works of poetry and “musical magic”. And with those works the master choreographer could fill the 2,000 seats in the Théâtre Cirque Royal in Brussels.

Players with words, you could also consider Ronald Balfour Corbett, better known as one of The Two Ronnies with his associate Ronnie Barker in the BBC television comedy sketch show who managed to bring laughter in the house. (A third Ronnie in the production was Ronnie Hazlehurst who took care of the main theme music for the show.)
On 31 March 2016, Corbett died at the age of 85, at Shirley Oaks Hospital in Shirley, London, surrounded by his family.
It was nice to see some sketches again which proved to be masterly timed and therefore still funny and ‘working’.