In 2018, we witnessed positive developments in the European economy, labour markets and society. For the sixth consecutive year, the EU’s ambitious agenda for jobs, growth and investment boosted a robust and job-rich recovery.

The Employment and Social Developments in Europe (ESDE) review is here again to provide evidence-based groundwork for this reflection. The 2019 edition focuses on “Sustainable growth for all: choices for the future of social Europe”. It explores the EU’s understanding of sustainable development and its links to economic growth, social inclusion, equality and well-being, climate and natural resources, and labour market institutions.
The news from ESDE’s analysis is good. Making Europe’s development sustainable is a perfectly realistic goal. Mainstreaming our actions upfront in the social domain as well as on climate and the environment can be a productive investment in economic performance. This is key to preserve our living standards.

ESDE confirms the continued expansion of the EU’s economy, all-time records for high employment and low unemployment as well as an improving social situation with the number of people at risk of poverty or social exclusion (AROPE) continuing to fall below its pre-crisis level.

Nonetheless, ageing, globalisation, technological transformation, climate change and geopolitical uncertainties challenge the sustainability of these achievements and the EU’s socio-economic model. Citizens increasingly expect policymakers to accelerate the transition to a socially inclusive and environmentally sustainable economy that benefits the well-being of all and leaves nobody behind. This is why the 2019 ESDE is dedicated to the theme of sustainability with a focus on its social dimension. ESDE discusses policy options that can preserve the EU’s competitiveness, sustain growth for the entire EU population and future generations, while transitioning to a climate-neutral economy. Making this a just transition requires mainstreaming social considerations upfront, in the design phase as well as in the implementation of all policies.

At global level, new risks such as protectionist tendencies in trade and increased international economic and geopolitical uncertainties contributed to a slowdown in global and EU growth in 2018 and led to further downward corrections of economic forecasts.

It was nice to see that more young people could bring older ones to think about climate change. In several countries we could find youngsters for several weeks bringing the climate to the forefront. Climate change, environmental degradation and inefficient use of natural resources also weigh on sustainable development prospects in the EU and the world. More Europeans are increasingly demonstrating a keen awareness of these challenges and of the importance of addressing all three dimensions of sustainability – economic, social and environmental – together. The aim is to make all of Europe’s achievements — its competitive economy, high living standards, valued welfare state, and pioneering engagement with the environment — sustainable in the long term for future generations. In particular by participating in weekly ‘climate marches’ across Europe since
the second half of 2018, students and other EU citizens have requested accelerated action against climate change.

It was lovely to see the movement for climate growing. The action by students, “School strike for the climate”, known as truancy for the climate or climate march for a better future, calling on governments to take measures against global warming could not be ignored any-more by the politicians.
The actions came about following the international movement School strikes for climate, School Strikes 4 Climate, Fridays for Future (Germany and Austria) and Klimastreik (Switzerland), which started in August 2018 on the initiative of Greta Thunberg.

Climate truants on January 24, 2019 in the Trierstraat, near the European Parliament, in Brussels

In Belgium, the first Youth for Climate actions started in December, 2018, at the initiative of a young climate activist from Mortsel (Antwerp) Anuna De Wever together with Kyra Gantois.

Galvanized by the COP24 Climate Change Conference in Katowice, Poland, strikes continued at least in 270 cities in countries including Austria, Belgium, the Netherlands, Germany, Finland, Denmark and the United Kingdom.

Feb 21, 2019 – Swedish teenager Greta Thunberg has led a march of thousands of Belgian students who skipped classes for the seventh Thursday in a row to march through Brussels and draw more attention to fighting climate change. 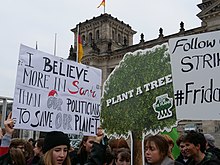 “FridaysForFuture” protest in Berlin on 14 December 2018. Students Strike for Climate in front of the German parliament in Berlin.

Meanwhile, other parts of the population voiced their anxiety about the cost of the economic transition necessary to combat climate change and the fairness of sharing that cost.

In recent Eurobarometer surveys, Europeans mention social concerns
related to rising prices, health and social security, pensions and the financial situation of their household as the most important issues they face at a personal level. Concerns relating to environment, climate and energy issues and housing are gaining ground over time. Europeans increasingly demand action to address the evident contrasts, while continuing efforts to address other important challenges – notably migration and security – and combat climate change and environmental degradation.

We can well say that the policy challenge is multiple and requires simultaneous responses: to those who face difficulties making ends
meet, who feel uncertain about their employment prospects, who enjoy lower levels of well-being or feel left behind; to those who believe that climate action is currently too limited and too slow; to those who fear that it is happening faster than they can afford, or adjust to or that it is diverting resources away from other investments or innovation; and also to those who caution that unilateral climate action might hurt the EU’s productivity and competitiveness.

ESDE is the European Commission’s flagship analytical report in the area of employment and social affairs, mandated by Articles 151, 159 and 161 TFEU.