Lots of people think they need a revolution or violence to change things.

We may not forget the urban workers, who moved by their misery and by the powerful social myths engendered by the Great Revolution, remained unreconciled. For a decade or more they had been increasingly drawn toward Socialism in its various utopian forms. An unprecedented flowering of Socialist thought marked the years 1840-48 in France: this was the generation of the eccentric French social, political, and economic theorist Barthelemy-Prosper Enfantin, the French philosopher, an influential early socialist thinker Charles Fourier, the revolutionary socialist and legendary martyr-figure of French radicalism Auguste Blanqui, the utopian socialist, noted for his theory of worker-controlled “social workshops”, Louis Blanc, the French libertarian socialist and journalist whose doctrines became the basis for later radical and anarchist theory, Pierre-Joseph Proudhon, the French socialist and founder of a communal settlement at Nauvoo, Étienne Cabet, and many others. Most of these system guilders preached persuasion rather than violence, but they stimulated the hopes of the common man for an imminent transformation of society.

In the 19th century within the French bourgeoisie as well, there was strong and vocal pressure for change in the form of a broadening of the political elite. Bills to extend the suffrage (and the right to hold office) to the middle bourgeoisie were repeatedly introduced in parliament but were stubbornly opposed by Guizot. Even the National Guard, that honour society of the lesser bourgeoisie, became infected with this mood of dissatisfaction.

In the 1960s we demanded a shift of emphasis, and a new pattern of relationships, greater tolerance for other people’s behaviour, and genuine desire for equality and mutuality in all things. Tolerance and unwillingness to condemn those who are different in colour, race, or culture formed the foundation for a new ethic among young people almost everywhere in West Europe. In the United States the voice for equality and opposition to racial hatred was strong but did not seem to continue into the next decade. Overthere there were the cases of Michael Brown Jr (in 2014). Those high-profile shooting deaths of African-Americans led to the creation of the Black Lives Matter movement. The death of the 46-year-old black man George Floyd, on May 25, 2020, might perhaps be a serious turning point for the U.S. and for Europe, having made people more aware of the discrimination, which is still going on everywhere in our so-called civilised society.

Afro and Asian Americans, including those of East Asian, Southeast Asian, and South Asian descent, like the native Americans have experienced racism since the first major confrontation with white settlers in America. The Naturalization Act of 1790 limited U.S. citizenship to whites only, and only white men who owned property could vote. Though many black people fought in the second World War, it looked like their patriotism was soon forgotten by the white people. It took until the Reconstruction, development of the black community, participation in the great military conflicts of the United States, when space was given to the elimination of racial segregation, and the civil rights movement which sought political and social freedom. In 2008, Barack Obama became the first African American to be elected President of the United States. He also tried to get more social reforms and to protect the ordinary worker and lower class civilian. Bernie Sanders wanted to come after him, but his ideas were much to left-wing for the majority of White Americans.

For years in the U.S.A. black Americans tried to bring change peacefully. Several people aware of the discrepancies in our society tried to bring improvement in social situations and/or abuses.

Today we also should be careful that CEO’s do not misuse the Corona crisis to restructure their companies and to put so many people on the street without work. At the beginning of this 21st century, we also face the need of again a transformation of society.

Today it are not the middle class of professionals that lead the country, but the multinationals, huge concerns and organisations representing the middle-class shop and factory owners, manufacturers, who give direction to the politicians. Now it are their literary and political allies who insist their directives would be followed by the government. Like in the 19th century when similar organisations and people also began to demand an influence in politics consistent with their economic status.

In Marxist theory, the bourgeoisie plays a heroic role by revolutionizing industry and modernizing society. However, it also sought in the 19th century to monopolise the benefits of this modernisation by exploiting the propertyless proletariat and thereby creating revolutionary tensions. In several countries, we have seen what the result was of people being oppressed by those who had all the money and power in their hands. 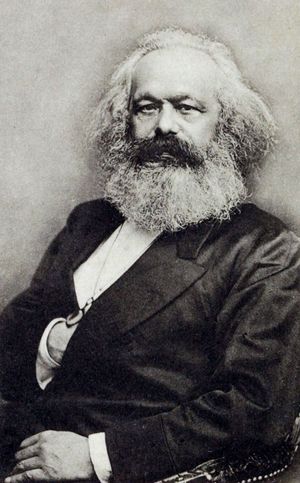 Karl Marx, revolutionary, sociologist, historian, and economist. He published (with Friedrich Engels) Manifest der Kommunistischen Partei (1848), commonly known as The Communist Manifesto, the most celebrated pamphlet in the history of the socialist movement.

According to Marx, the world would have to face a final revolution in which the property of the bourgeoisie would be expropriated and class conflict, exploitation, and the state would be abolished. Even in Marx’s lifetime, however, it was clear that the bourgeoisie was neither homogeneous nor particularly inclined to play the role that he had assigned to it.

We do not always need a sudden, and hence typically violent alteration in government. By patience and regular small changes, one can get as much done in a few years on a base of stability; whilst producing a sudden uprise and fighting to get some ideas realised, could bring a counter-revolution and again a reversal or other change similarly, having one revolt after the other.

Principles of participation, discussion, and rational explanation and individual decision-making, are more helpful to come to a permanent or more stable transformation. When structurally good funded I believe, after some time, people shall come to see that our society has to go in another gear, changing sites.

Who can tackle Donald Trump

1 Response to 19th and 20th Century Shifts in bourgeoisie