In the Kafkajan country Belgium after more than one year (nearly1,5 year) after elections there is still no government formed according to the votes given by the people.

In that tiny country it is clearly shown how without a sense of community and belongingness, democracy becomes hollow. Clearly, the Belgian politicians have no idea any more what goes on in the real lives of the Belgian citizens. The politicians also do not have any empathy with ordinary people or the working class. They also have no real sense of obligation or duty to their voters nor to eachother. Short: they do not seem to have any decency any more to try to build up a nation for the good of all.

In my article of the morning of Tuesday, August 18, So-called own sacred values under threat, for my other blog, From Guestwriters, I write about the miserable situation we are evolving in our world of globalisation, where there are certain politicians who want to create division in their own country, by discriminating others and by ignoring all health and ecological matters.

The last few years we have seen a growing tendency to develop to politics of nationalism and xenophobia. The United States with their 45th president is the one who can take the lead and show the whole world how it shouldn’t be. But incredibly he may find lots of followers all over the world. Some think he is the example to bring the not wanted people out of the country and to bring the economy back on track. Certainly, with the Coronacrisis some seem to find in him someone who should know and who sees much clearer how

‘virologists try to blind the world’. 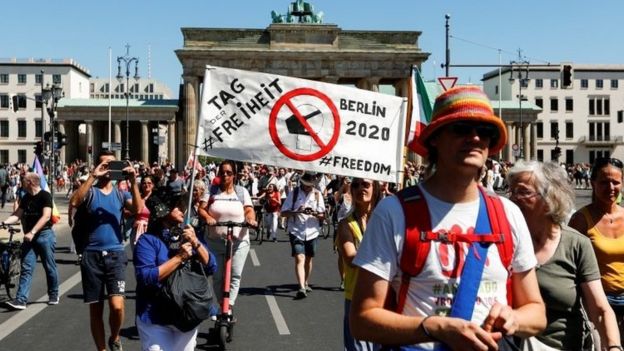 Thousands of people in the German capital Berlin have taken part in a protest against the country’s coronavirus restrictions.

In lots of countries we can find groups of demonstrators saying measures including the wearing of facemasks violates their rights and freedoms. Though they forget those measures are there to protect the safety of all people, themselves and those around them. Several people wanting others to believe governments are using CoViD-19 to have power over the people and to have the people in control.

From all those who think their freedom is being limited by the corona measures came early Agust, about 17,000 protesters in Berlin expressing their displeasure in an atmosphere of

you are kidding people, there is no such dangerous virus that can threaten us.

What we can see in all those countries where protestors come on the streets, is that several participants are from the far-right, but everywhere we also find conspiracy theorists who do not believe Covid-19 exists. I wonder why and how then such news about full hospitals and so many dead could still be in the news every day if it was not true.

Just as there are lunatics in America who think with their right-wing friends that it is a trick to conquer the people, there have been protesters in Germany, Belgium and the Netherlands, because they consider the corona measures of their government an infringement on their personal freedoms. Some of the protestors are just people who simply object to the government’s approach to the pandemic, or do find the government should prioritise on the economy, making sure all the factories, shops, restaurants and events should be enabled to continue their business as usual. For them it is not proven that people would become more infected or quicker ill when there would not be such harsh restrictions as now.
They do not seem to realise that the measures taken are necessary measures to protect people.

Some consider themselves enslaved by the government. From this one can deduce that those people are not used much anyway if they already feel like a slave to have to wear a mouth mask or face mask now and then. In many cities we hear them shouting:

“We want democracy back”,

“We are being forced to wear a muzzle”.

In Germany, the Netherlands and Belgium there are many who have reservations about the scientists who are given the floor in the media. However, there is no one who can put forward a skilled scientist who can contradict the current corona measures as useless.

The same for the U.S.A.where in over a dozen states from coast to coast, protesters also have taken to the streets, blocking roads and honking car horns. They too say that the stringent measures restricting movement and businesses are unnecessarily hurting citizens. Many cite President Trump’s caution that the cure cannot be worse than the disease itself.

Some also claim we need a “racial consciousness” and a white “awakening”, doing away with all those immigrants which bring in all those diseases. For many now its time to go on with a stronger or more acute peaceful ethnic cleansing.

It is incredible to see how many think Donald Trump is the only one to solve the present crisis and to bring the U.S.A. back on its feet. I would say

“by now Americans should have seen how Trump is not able to manage the country safely.”

Though for many white Americans Donald Trump as a potentiality was undoubtedly energising and is making America great again. Some say that the Donald Trump campaign was the first time in their lifetime that

“an identity politics for white people was on the scene.”

Lots of white Americans have forgotten how the land they live in now, was founded and build up. They seem to have forgotten how diverse it was at the beginning, having people come from all over Europe and Russia. Today they are against diversity. In defence of a more homogenous nationalist identity, they are convinced that too much diversity and immigration undermines a sense of community and belongingness and in the end would do their nation so much damage, that they cannot accept such an evolution. It is an argument made most forcefully by far-right opponents of immigration, but has become increasingly voiced by liberals, too.

People forgetting their ancestors and not seeing how different peoples can enrich each other, instead of making their nation stronger by excluding others, shall make it weaker. A nation constantly needs new blood and new ideas People also have to be open to create bonds with each other, and they have to find ways to co-operate with others from outside their community. When there is no will to share the open space and to have sense of shared ownership of, and obligation to the public space it shall not be possible to have a properly functioning democracy. Without such a sense of community and belongingness, democracy becomes hollow. When people have no real sense of obligation or duty to each other, but exist as isolated individuals with few social bonds tying them together it shall not be possible to have a coherent stable nation.

The place where we live and the traditions from that place shall influence us and all those who come to live in that place. When those living in that place can feel a togetherness the bond shall be stronger but also more productive and positively successful.  As by reason and necessity, people should have an openness to others in their community to have their community to grow.

Today we see several politicians who have their voters forget the past but to see an ideal picture, going for social transformation, defined less by a sense of a shared past (though most draw upon historical traditions) than by hopes of a common future; the embodiment of the politics of solidarity rather than of identity. Those populist politicians throw sand in the eyes of their voters and want them to believe their traditions and values are in danger. They give the impression those who are against them created the coronavirus and want to come in control of the nation using all sorts of fake news. That these populists themselves spread a lot of lies, none of their followers seems to see or to believe.

Many do not see that though diversity may bring about cultural and ideological clashes, it are those clashes which create positive fireworks. There is the fear of nativist sentiment that immigration undermines social cohesion and erodes our sense of national identity. But when their national identity is strong enough the minority of those coming to live in the region shall easier adapt to those traditions of the people living in that community.

Several people think that to accept immigrants their ways of being, and not criticize or challenge their values or practices, would make them weaker and would have them change their values and practices. All those who complain that so many become Muslim, should wonder more why they did not stay a Catholic or Protestant and found it better to change religion. They should understand it is much better to police the boundaries between groups to minimize clashes and conflicts and to learn from each other. Such acceptance should not at all be corrosive of democracy. When everybody feels that there is mutual respect, everyone shall stay open and receptive for the other.

To recognize the mutual respect requires us to challenge that values and beliefs of others and to have a willingness to exchange ideas and to go in open public debate about the values, to which the one and the other aspire. People would be surprised to come to see when there is a voluntary openness such a debate does not have to be difficult or to be so confrontational that it shall be felt inconveniently. Often such difficult confrontational debate is a necessity in any society that seeks to be open and liberal. And democratic.

The Hero of the greatest …. failures

Challenges of the Post-Pandemic period

Migrants to the West #2

An European alliance or a populist alliance

18 Responses to Hollowness of democracy