ISIS on the rise again as US troops are sent home

Since the American troups are leaving Iraq and Afghanistan all seems to come back to older times, with Islamic terrorist groups willing to have all the power again.

ISIS is starting to regroup and claim its terrorist place again. On Monday, it executed a suicide attack in the Iraqi capital, killing 30 and wounding over 50. The death toll could rise due to the critical condition of some injured people. The group is continuing to make a statement about its growth in Islamic countries. They use jihadism tactics to execute attacks to cause pain amongst people. The group lost its territory in Iraq in late 2017. However, it has been resurfacing from their hideouts in remote desert and mountain Iraq areas.

A report by the United Nations Security Council claimed that the leaders of the Islamic State in Iraq and the Levant-Khorasan are trying to make fresh recruitment by attracting Taliban fighters who have rejected the US and Afghan-Taliban peace deal.

The blacklisted militant group Tehreek-i-Taliban Pakistan (TTP) still has around 6,000 trained fighters on the Afghan side of the border.

The 28th report by the United Nations Analytical Sanctions and Support Team also confirmed the presence of hundreds of anti-Beijing fighters near Afghanistan’s border with China.

From news messages from the Middle East and Africa, we hear disturbing news of several Islamic terrorist groups attacking villages or kidnapping schoolkids. Also between the many different Islamic groups there are mutual fights.

The report has presented to the UN Security Council this week under a UN mandate. It requires monitoring teams to periodically produce detailed reports on hostilities in different regions.

“Its leaders also hope to attract intransigent Taliban and other militants who reject the Agreement for Bringing Peace to Afghanistan between the United States of America and the Taliban and to recruit fighters from the Syrian Arab Republic, Iraq and other conflict zones,”

Holy War not finished yet

In the West we may not forget that ISIL-K continued to be ‘underground and clandestine’ and spread everywhere there are several small groups active and recruiting new members. Al Qaeda continues to maintain its presence in at least 15 Afghan provinces, primarily in the eastern, southern and south-eastern regions. For them, the Holy War is not finished yet and some voices claim that a turnaround will be coming soon.

Afghan politician, academic, and economist, Ashraf Ghani Ahmadzai, who was serving as President of Afghanistan for his second term.

The ultraconservative political and religious faction that emerged in Afghanistan in the mid-1990s following the withdrawal of Soviet troops, the collapse of Afghanistan’s communist regime, and the subsequent breakdown in civil order, the Taliban say that they do not want a monopoly on Afghanistan’s power, but at the same time, they have stressed that until a new government is formed in Kabul and President Ashraf Ghani is removed from office, peace is established in the country. In an interview with the Associated Press news agency, the current Taliban spokesman in Qatar office Suhail Shaheen clarified the Taliban’s stand regarding the future of Afghanistan.

Those Islamic terrorists seem to love bloodshed on or near Islamic holy days. The suicide attack in the Iraqi capital for example, happened in Wahailat Market, where people were preparing to celebrate the Muslim holiday of Eid al-Adha. Perhaps they took this “Festival of Sacrifice” as a good opportunity to make a lot of sacrifices. Eid al-Adha marks the culmination of the hajj (pilgrimage) rites at Minā, Saudi Arabia, near Mecca, where this year were only allowed people from Saudi Arabia, because of Covid. Even when people can not go to that important pilgrimage they love to celebrate it throughout the world. However, instead of celebrating, ISIS planned for them to cry and caused pain amongst families.

Children and women were among the dead and wounded, according to health and security officials. The attacker detonated his explosive vest in the Wahailat outdoor market in Sadr City, a predominantly Muslim Shia neighbourhood in the east of Baghdad.

Police officials said a number of shops and stores were also damaged in the blast. 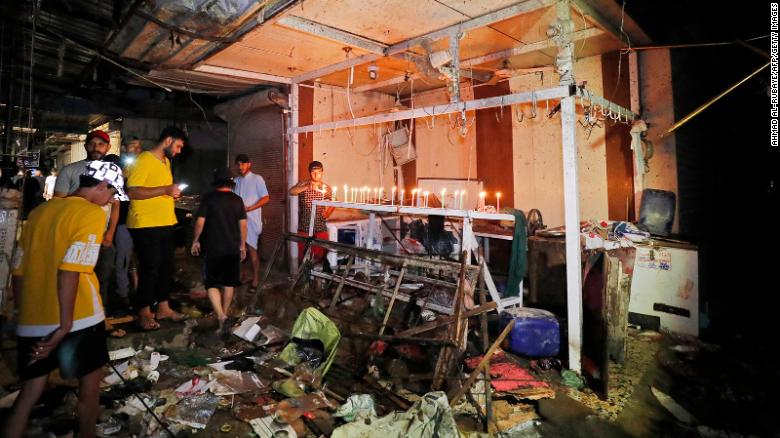 Iraqis light candles at the site of the explosion in a popular market in the mostly Shiite neighbourhood of Sadr City, east of Baghdad, on July 19, 2021.

Top Iraqi government officials, including the Iraqi President and Iraqi Prime Minister, condemned the “terrorist attack” and vowed to bring perpetrators to justice.

“This horrific attack right before Eid Al-Adha is a terrible reminder of the violence Iraqi children continue to face.”

ISIS and many other terror groups are on the rise

This was not just an isolated case of violence. There is a very good reason that several people in Iraq and Afghanistan are very worried. Lots of citizens have lost hope that their country would be a safe place to bring up children. Those who are able to leave take the preparations for looking for a better country in the West.

From many sites, we can hear that the people are starting to panic, not knowing what might happen tomorrow. Even though the attacks have not been many, the situation is not good at all.

Until now the Afghan and Iraqy governments showed not that they can handle the matter properly. Iraqi President Barham Salih found this last attack an evil attack but like so many previous attacks his security forces could not prevent it. He promised that there would be no calm until they uproot the hateful and cowardly terrorism. The military also offered condolences to the affected families. In addition, a UNICEF representative in Iraq said it was a horrific attack before the celebration. He condemned and called for institutions to work together to make Iraq a safe place.

Iraq’s government can not keep counting on foreign troops to keep its population safe. It should stand out and put measures and controls to counter such terrorist groups.

While meeting with Iraq’s Prime Minister Mustafa al-Kadhimi on Monday, President Joe Biden announced that the combat mission in the region would cease by the end of the year, more than 18 years after U.S. troops were sent to the country.

“Our role in Iraq will be … to be available, to continue to train, to assist, to help and to deal with ISIS as it arises, but we’re not going to be, by the end of the year, in a combat mission,”

Although we do not notice it, al-Kadhimi also finds that

“There is no need for any foreign combat forces on Iraqi soil.”

The Prime Minister is convinced that his nation

“is stronger than ever.”

The White House declined to say how many soldiers will remain in the Middle East.

“The numbers will be driven by what is needed for the mission over time,”

“The real announcement today… is about a change of mission.”

Like a drop in the ocean, the United States will give Iraq $155 million for humanitarian assistance, including shelter, health care, emergency food assistance, protection, water, and sanitation services. We can only hope this time this will bring some changes in the positive direction.

In recent years the US mission was dominated by helping defeat ISIL in Iraq and Syria, but it did not succeed very successfully, because at certain points the U.S.A. helped or protected for too long the wrong people (like Assad).

Al Kadhimi is seen as friendly to the United States and has tried to check the power of Iran-aligned fighter groups. But his government condemned a US air raid against Iran-aligned fighters along its border with Syria in late June, calling it a violation of Iraqi sovereignty.

To counter the continuing attacks, the government will need to be at the forefront to fight and protect its citizens. Without that, there will be no peace.