Fast-rising energy prices attract China to capitalise on them

In Western Europe, no one will be able to deny that they are not satisfied with the development of gas and electricity prices.

In recent days, it has been commonplace to express dissatisfaction with the rapidly rising prices of utilities. Voices were heard from all quarters that this could not continue. One heard various people complain that the cost of energy had risen so high that they could not pay it and/or that it was putting them in poverty.

The president of China, Xi Jinping, sees in this situation a good reason to let the voice of the People’s Republic of China being heard in Europe. He is very well aware that an energy crisis now is threatening to slow the world’s second-biggest economy and therefore forces his administration to backtrack on climate change promises.

He has ordered coal miners to boost production and to expand capacity by 100m tonnes. That way, China shall be able to produce cheaper products than European companies would be able to bring on the market rebounds after the corona crisis.

A recovery in the world economy, the shift away from fossil fuels and interruptions to the production of natural gas and coal have combined to unleash a global scramble for energy supplies. The power shortages in China, which relies on coal for more than half its energy consumption, have already forced high-tech manufacturing factories to halt or reduce operations, affected homes in parts of the north-east and raised fears that critical industries such as food production could be hit.

Coal shortages are affecting the economies of China and India which made the coal prices in China soar this year, while prices for delivery into Europe hit a record this week and are up more than threefold since January.

A dearth of coal for power generation has prompted China to step up purchases of natural gas, exacerbating a squeeze on supplies of the commodity in Europe and the UK ahead of winter. Like other energy markets facing shortages, China shall have to perform a balancing act of using coal to keep the lights on while also showing commitment to decarbonisation targets.

We must be aware that there, but also here in Europe, there is a danger that government leaders will see in this situation more support for increasing, rather than decreasing, nuclear energy in their own countries. The big problem at the moment is that we are still far too dependent on gas and electricity to provide our necessary energy. Wind and hydroelectric power are still insufficient to meet the large demand.

President Xi had recently announced that China will no longer build coal plants overseas, but it looks like the short-term reality is that China and many others have little choice but to increase coal consumption to meet power demand.

Badly enough, the consumer will be affected at several levels because the increasing energy prices will be reflected in the price of the products to be manufactured and delivered.

Also for China China’s food logistics networks, such as cold chain storage facilities, shall feel “some impact” given their heavy use of electricity. 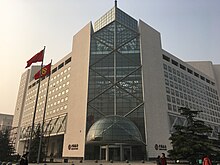 The Bank of China, one of the four biggest state-owned commercial banks in China.

Following the swings in coal prices on Friday, state lender Industrial and Commercial Bank of China announced that from October 17 it would suspend the opening of new accounts for some foreign exchange trading as well as for retail commodities market trading in energy, base metal and agricultural products

“in order to adapt to the changing market situation.”

Next: After a virus pandemic an energy disease