In a heated plenary debate with Polish Prime Minister and economist Mateusz Morawiecki, Commission President Ursula von der Leyen and Slovenian Foreign Affairs Minister Anže Logar, most MEPs condemned the contentious ruling of 7 October by the Polish Constitutional Tribunal, which states that cornerstone provisions of the Treaty on the EU (Art. 1 and 19) are unconstitutional under Polish law.

The Slovenian politician, minister of foreign affairs in the third Janša cabinet since March 2020, Anže Logar agreed that:

In EU architecture, primacy of EU law is the way to guarantee the equal equality of member state before the treaties and to ensure that all union citizens enjoy the same rights. Without primacy, the application of EU law would vary from one member to another.

But in the last five years those human rights have become are under real pressure.

Poland wanted a few years ago to be part of the European Confederation, to which nobody is obliged to become a member.  It are voluntary associations of independent states that, to secure some common purpose, agree to certain limitations on ‘their freedom of action’ and establish some joint machinery of consultation or deliberation.
The European Union (EU) is such a supranational organisation that, while resisting strict classification as either a confederation or a federation, has both confederal and federal aspects. 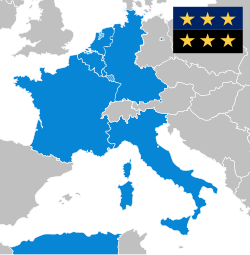 Founding members of the ECSC: Belgium, France, Italy, Luxembourg, the Netherlands and West Germany (Algeria was an integral part of the French Republic)

Before the EU became where it stands for today, it grew from the European Communities (EC) — comprising the European Coal and Steel Community, established in 1952; the European Economic Community (Common Market) or EEC, established in 1958; and the European Atomic Energy Community (Euratom) — quickly developing to executive machinery exercising significant regulatory and directive authority over the governments and private business firms of the member countries, becoming subsumed under the EU in 1993, by the Maastricht Treaty, providing the EU this executive authority, though each of the member governments retaining still a substantial measure of national sovereignty — an important aspect of confederal arrangements.

But in all instances, all member states are expected to come to an agreement with the foundational laws and values o the Union. For years now the EU has tried to find good ways for daily interaction and for smoothly resolving disputes.

From the debate yesterday it looks like Anže Logar understands that

It is ultimately the basis for our living together in a common European home. The presidency is committed to bringing forward exchanges in a positive and constructive atmosphere on rule of law and related issues.

The inhabitants from the European Union expect that all over the EU would apply the same basic rules of freedom rights. Those who wanted to become members of the Union agreed that European law means that treaty provisions and legislation are directly binding on individual citizens, regardless of whether their governments have modified national laws accordingly. All members know from the beginning when they agree to become a member, that where the two conflict EU community law has “supremacy” over national law.

Poland should remember why it wanted to become a member of the EU and how almost 40 years ago, in December 1981, the communist regime in Poland imposed martial law and many members of Solidarnosc, the independent trade union of other groups, were put in jail simply because they stood up for their rights. It became clear at that time the people of Poland were fed up with the many restrictions and that they wanted their freedom and democracy.

Like millions of other Europeans, from Budapest to Tallinn to East Berlin. They wanted the freedom to choose their government.

They wanted free speech and free media. They wanted an end to corruption, and they wanted independent courts to protect their rights. The people of Central and Eastern Europe wanted to join the European family of free people, a strong community of values and democracy.

The majority of citizens of the European Union are convinced that this is what Europe should all be about and should stand for.

Von der Leyen directed herself to the honourable members and said:

The recent ruling of the Polish Constitutional Court puts much of it into question. We have been concerned about the independence of the judiciary for some time.

It is those Human Rights and the ongoing corrosion of democratic laws and procedures in Poland, that we should take care of.
The European Commission has good reason to be carefully assessing the Polish judgement, which should make us all deeply concerned, certainly because this ruling calls into question the foundations of the European Union. It is a direct challenge to the unity of the European legal order.

Only a common legal order provides equal rights, legal certainty, mutual trust between member states and therefore common policies. This is the first time ever that the Court of a member state finds that the EU treaties are incomplete with the national constitution.

She is totally aware of the serious consequences for the Polish people,

Without independent courts, people have less protection and consequently their rights are at stake.

We all should know and take care that Polish people, like all other citizens of the European Union shall be able to rely on fair and equal treatment in the judicial system.

In our Union we all enjoy the same rights and this basic principle of fundamentally impact people’s lives. Because if European law is applied differently in Grenoble or Gottingen, or Gdansk, EU citizens would not be able to rely on the same rights everywhere.

assured the president of the commission.

One would expect that when joining the European Union, the Polish people put their trust in the European Union and had hopes that this Union would not be a duplicate of the Soviet Union, but a nation where they would have the right of freedom and a union that would defend their rights.

The Commission is the guardian of the treaty. It is my Commission’s duty to protect the rights of EU citizens wherever they live in our Union.

The rule of law is the glue that binds our Union together. It is the foundation of our unity. It is essential for the protection of the values on which our union is founded. Democracy, freedom, equality, and respect for human rights. And this is what all 27 member states have signed up to as part of this Union as sovereign countries and free people.

we cannot and we will not allow our common values to be put at risk. The Commission will act and the options are all known. First option infringements where we legally challenge the judgement of the Polish Constitutional Court.

Another option is the conditionality mechanism and other financial tools. The Polish government has to explain to us how it intends to protect European money, given this ruling of their constitutional court. Because in the coming years we will be investing two thousand one hundred billion euros with a multiannual budget and the next generation EU recovery programme.

Those who do not want to hear must feel. And the best way to punish someone is to hit them in the purse strings. By imposing financial guarantees on Poland, perhaps it will come to terms with the fact that it does indeed need the European Union, but also that it will have to recognise its values.

Poland has to see that when it gets funds it is European taxpayers’ money and if our union is investing more than ever, to advance our collective recovery of the CoViD crisis, we must protect the union’s budget against breaches of the rule of law.

Poland has a stake in Europe. Together we can build a Europe that is strong and confident in a world where other big powers become more and more assertive. Europe has benefited from Poland’s unique experience so much.

Without the people of Poland. Our European journey would have been very different. When Karol Wojtyla as Pope John Paul the second went to his homeland, he changed European history forever. When Lech Walesa, with a shattered group of trade unionists, overcame a mighty army, we saw the beginning of the fall of the Iron Curtain.

And when President Lech Kacynsky ratified the Lisbon Treaty, together with the Charter of Fundamental Rights he reaffirmed Poland’s commitment to our values.

The leaders of Poland may not forget that it are those Polish willing to help to build up their country after the fall of the Iron Curtain, that provided economic growth for the country. They enabled their homeland to thrive as a vital part of our Union.