One year ago a sacred place was attacked

All over the world people look up to what they think is a good example of how a nation can grow to such a big nation as the United Nation, where for years one is trying to build up a democratic nation. We do know it has a lot of faults and weaknesses and not such a democratic voting system, but at least we would think and hope it is a democratic country where there would be free expression of mind.

Though on the sixth of January of last year, we could not believe our ears and eyes. One year ago today in what many consider a sacred place, democracy was attacked. During live broadcasts on various TV stations around the world, people could watch in amazement as a frenzied crowd stormed the symbol of democracy.

The whole world could already see in the previous days how a possessed man was presenting himself as the one and only President of America, whose rights were being violated by forgeries at the polling stations. Undeterred, that 45th President of America called on the people to rise up against those forgers and illegitimate elected officials.

With all their might, the storm troopers of the Capitol managed to penetrate it and do a lot of damage as they continued to search for those whom they would like to see die in the pillory. Their faces spoke volumes. If they had found only one of the sitting members, he or she would have been lynched.

The world could be a witness that the will of the American people seemed to be under assault. The American Constitution faced the gravest of threats. Outnumbered in the face of a brutal attack, the Capitol police, the DC Metropolitan Police Department, the National Guard and other brave law enforcement officials tried to save the rule of law. They had it very difficult to keep the attackers of the Capitol out of the building. They had to give in, otherwise perhaps losing their own life.

Certain dates echo throughout history, including dates that instantly remind all who have lived through them — where they were and what they were doing when our democracy came under assault. Dates that occupy not only a place on our calendars, but a place in our collective memory. December 7th, 1941. September 11th, 2001. And January 6th, 2021.
On that day, I was not only Vice President-elect, I was also a United States senator. And I was here at the Capitol that morning, at a classified hearing with fellow members of the Senate Intelligence Committee. Hours later, the gates of the Capitol were breached.
I had left. But my thoughts immediately turned not only to my colleagues, but to my staff, who had been forced to seek refuge in our office, converting filing cabinets into barricades.

Too often the ordinary staff is forgotten, but they too were at risk. good to hear that Kamala Harris knew

What the extremists who roamed these halls targeted was not only the lives of elected leaders. What they sought to degrade and destroy was not only a building, hallowed as it is. What they were assaulting were the institutions, the values, the ideals that generations of Americans have marched, picketed, and shed blood to establish and defend.

Yes, they were willing to shed blood and did not shame themselves to go around like animals. Though several call themselves Christian, their behaviour was nothing of how a Christian should behave. But in a way that were we already used from a lot of Trump supporters. Many of the conservative Christendom were carrying their leader as a saint on their hands. They did not even blame him for waving the Bible around to reinforce his words, which were totally against the values of the Bible.

On January 6, the whole world could see how the American nation had derailed. Harris admits

“all saw what our nation would look like if the forces who seek to dismantle our democracy are successful: The lawlessness, the violence, the chaos.”

And chaos it was. Those who stormed the Capitol were totally out of control. It was noteworthy that they all felt that the 45th President of their nation was behind their actions as they followed his call to storm the Capitol. 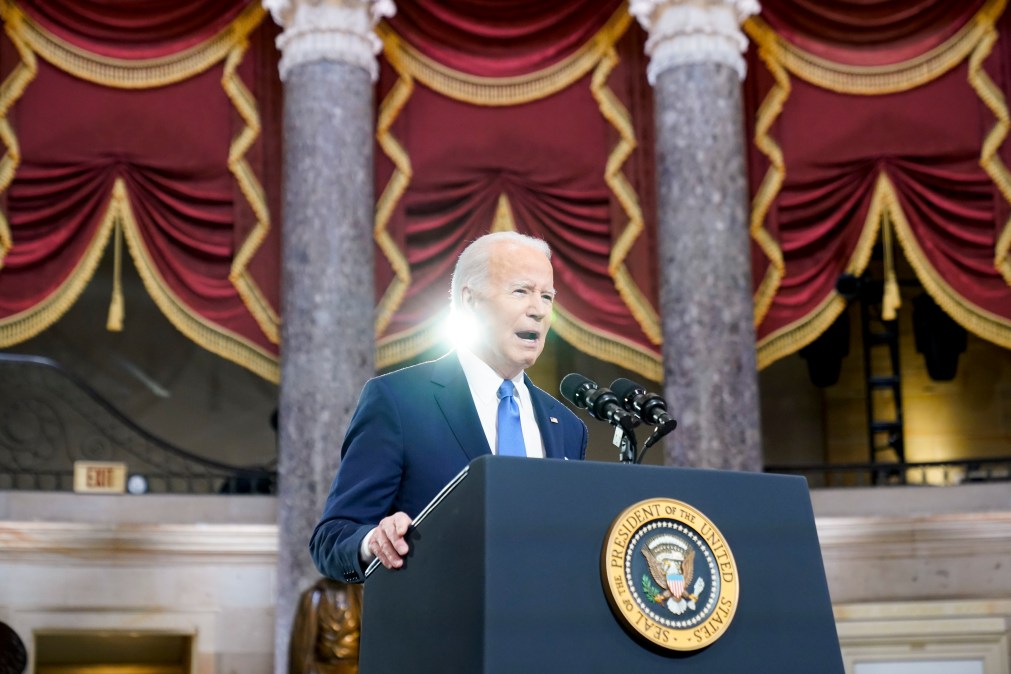 President Joe Biden speaks from Statuary Hall at the U.S. Capitol to mark the one year anniversary of the Jan. 6 riot at the Capitol by supporters loyal to then-President Donald Trump, Thursday, Jan. 6, 2022, in Washington. (Andrew Harnik, AP Photo)

Marking the first anniversary of the January 6 insurrection Joe biden, speaking from Statuary Hall in the U.S. Capitol, said the former president and his followers had

“held a dagger at the throat of democracy.”

In a calmly way the current President looked back at that day and the attempt to undo American democracy, saying such an insurrection must never happen again. Today we can see how January 6 reflects the dual nature of democracy. Its fragility and its strength. Harris added:

“You see, the strength of democracy is the rule of law.”

January the 6th of 2021 is a day America got to see and feel how frail democracy can really be. Perhaps it shall be remembered as a moment that accelerated the unravelling of the ‘oldest, greatest democracy in the world’ or a moment when the Americans decided to secure and strengthen their democracy for generations to come. But then they shall have to make more work to penalise the instigator of that tumult and to penalise all those who brought so much damage to that House of America.Those men and women storming the Capitol

“didn’t come here out of patriotism or principle. They came here in rage,”

Joe Biden vowed to defend the nation’s founding ideals from the threats posed by the violent mob that stormed the Capitol one year ago and the prevailing lies that Trump and his allies continue to repeat about the 2020 election.

“Even before the first ballot was cast, the former president was pre-emptively sowing doubt about the election results,”

For him it was clear that the founding fathers had worked to try to build something up that was totally different than the previous president was willing to do to make America Great Again. Biden made one of the most passionate addresses of his still-young presidency as he harkened back to critical moments from the nation’s past, casting the assault as a living symbol of the inflexion point in American history he so often speaks about.

Biden, in a speech from the US Capitol, said nearly softly and thoughtful:

“For the first time in our history, a President had not just lost an election. He tried to prevent the peaceful transfer of power as a violent mob reached the Capitol.”

We may be happy that those rioters did fail. It could have ended very differently. Biden admits that they failed. He said:

They failed. And on this day of remembrance, we must make sure that such an attack never, never happens again.”

Like in previous speeches, Biden did not call the envisioned person by name. He mentioned more than a dozen times “the former President” but in a direct shot at Trump, Biden added,

“His bruised ego matters more to him than our democracy or our Constitution, he can’t accept he lost.”

We can only hope that the thousands of supporters of that bully have come to realise that it was he (Donald Trump) who tried to sell lies as truth and who deceived the people in front of them. However, we should not be too quick to think that the danger is over. There are still masses of Trump supporters who truly believe that their president is the black sheep that the press wants to put down because it is afraid that he can raise America from the ashes and put down all the falsehoods that press has spread in the past years. For many, Trump is still a man to be followed and defended who will be able to make their America great again by keeping all the refugees out and all the non-original Americans out. They still believe in his innocence and in his MAGA.
The Christian fundamentalists are not letting go of their saint and are willing to do everything that he will rise again in 2024. Therefore, the American press as well as the American juridical departments shall have to do their utmost to show the American people the truth and show the ‘other face’ or ‘hidden face’ of Donald Trump. Even among congressional Republicans who condemned the attack in the days afterward, most have stayed loyal to the former president. At the moment only 700 people are charged, but not yet prosecuted. 72 percent of Republicans and 83 percent of Trump voters are saying the former president bears “just some” responsibility or “none at all.” That number should worry us a lot. It is up to the government to take serious measures and to open the cesspool that Trump has left behind.

Although Biden made little mention of voting in his speech, Vice President Kamala Harris, who is tasked with leading the administration’s work on voting rights, used her brief introductory remarks to call on Congress to pass voting rights legislation.

“The work ahead will not be easy. Here in this very building, a decision will be made about whether we uphold the right to vote and ensure free and fair elections,”

“We must pass the voting rights bills that are now before the Senate.”

It also would not be bad to have a more fair voting system, i.e. giving the number of votes for a person in comparable percentages, as the numbers to be taken into account.

“I did not seek this fight, brought to this Capitol one year from today. But I will not shrink from it either. I will stand in this breach, I will defend this nation. I will allow no one to place a dagger at the throat of this democracy.”

Republican leaders and lawmakers are largely staying away from the day’s remembrance events, viewing them as overly politicized — some continuing to spread false claims about the election.

“While the broken windows have been repaired and many of the rioters have been brought to justice, the truth is that our democracy is at greater risk today than it was back then.”

Reflecting on what happened before and after the 6th of January 2021 America has to investigate its course and search for a good answer what kind of nation they are going to be.

Please find also my other article at my other site which presents facts of the world and views at the world:

The man outranking the others having the trump card

Who can tackle Donald Trump

In denial, Donald Trump continues to insist that nothing serious is at hand and everything is in control

The Hero of the greatest …. failures

Stress-test for democracy #1 Storming of the Capitol in Washington

Stress-test for democracy #2 A coup d’etat with bloodshed

The death knell of an Empire

Donald Trump requesting to block investigations about the insurrection

10 Responses to One year ago a sacred place was attacked