Already for some time we could see Vladimir Putin making fists to the West. Relations between NATO and Ukraine date back to the early 1990s and have since developed into one of the most substantial of NATO’s partnerships. We could already see how in 2014 Russia backed separatists who started a conflict in large areas of the east and seized part of southern Ukraine. In the wake of the Russia-Ukraine conflict, cooperation with NATO has been intensified in critical areas. Russia in the past gave already more than once signals that ex-Soviet countries would better not come to work closely with the NATO countries. According to Putin, the former Soviet countries should unite and strongly oppose the West.

Russian forces made sure they would be noticed, and as such they showed that it was not only building up its troops at the borders of Kazakhstan and Ukraine, it would not hesitate to enter those countries like it did with Kazakhstan. Though Russia’s Deputy Foreign Minister Sergei Ryabkov insisted there were

“no plans, no intentions to attack Ukraine”.

the West is not so sure about this.

Ryabkov described recent troop movements on Russian territory as nothing to fear, it just being part of the yearly exercise. Also, armed forces chief Valery Gerasimov earlier denounced reports of an impending invasion as a lie.

The Russian president points with his finger to the attitude of the West, calling the NATO allies the aggressors. The NATO also trying to capture ex-Soviet countries by promising better trading conditions and funds.
Mr Ryabkov has compared the current situation to the 1962 Cuban missile crisis, also known as the October Crisis of 1962, when the confrontation between the United States and the Soviet Union escalated into an international crisis when American deployments of missiles in Italy and Turkey were matched by Soviet deployments of similar ballistic missiles in Cuba.

Sparked by the Ukrainian government’s decision to suspend the signing of an association agreement with the European Union, a wave of demonstrations and civil unrest in Ukraine began on the night of 21 November 2013 with public protests in Maidan Nezalezhnosti (Independence Square) in Kyiv. since then there have been regular difficulties in the different regions.

In the aftermath of the 2014 Ukrainian revolution and is part of the wider Russo-Ukrainian conflict, Russia backed separatists who started a conflict in large areas of the east and invaded plus subsequently annexed the Crimean Peninsula from Ukraine in March 2014. Russia captured large swathes of Ukraine’s two eastern regions collectively known as the Donbas. The conflict that has taken some 14,000 lives, can be called the biggest land-grab in Europe since World War II and came to bring more damage to Europe’s post-Cold War security order.

Ukraine lacks the leverage to restore sovereignty over Crimea, at least for the foreseeable future but watches with suspicion how Russia could possibly want to come and play the bauble over the whole of its region.

Almost immediately after The Ukrainian government made clear they had the intention to draw Ukraine closer to Europe by signing an association agreement with the European Union, armed men began occupying key facilities and checkpoints on the Crimean peninsula. Clearly professional soldiers by the way they handled themselves and their weapons, they wore Russian combat fatigues but with no identifying insignia. Ukrainians called them “little green men.” President Vladimir Putin at first flatly denied these were Russian soldiers, only to later admit that they were and award commendations to their commanders.

Moscow maintains a historical claim to Crimea. The Russians colonised Crimea during the reign of Catherine the Great, and they founded Sevastopol — the peninsula’s main port and largest city — to be the homeport for the Russian Black Sea Fleet. Following the establishment of the Soviet Union, Crimea was a part of the Russian Soviet Federative Socialist Republic until 1954, when it was transferred administratively to the Ukrainian Soviet Socialist Republic.

When the Soviet Union collapsed in December 1991, the resulting independent states recognised one another in their then-existing borders. Russia’s seizure of Crimea from Ukraine violated, among other agreements, the UN Charter, the 1975 Helsinki Final Act, the 1994 Budapest Memorandum of Security Assurances for Ukraine and the 1997 Treaty on Friendship, Cooperation and Partnership between Ukraine and Russia.

Seizing Crimea in a quick and relatively bloodless operation proved very popular with the Russian public. Putin’s approval rating climbed accordingly. In line with this action and Putin hoping to get even more popular with his nationalism and enlargement drive of united countries.

The hard winter freeze that typically comes to Ukraine by January has not happened in many areas of the country. As long as the ground remains muddy, senior administration officials said, Mr. Putin might be forced to push back a ground offensive until February at the earliest.

A fierce diplomatic push to give Vladimir Putin face-saving alternatives to military action began this week in Geneva, where Deputy Secretary of State Wendy Sherman led a U.S. delegation for talks with her Russian counterpart, Sergei A. Ryabkov, and other Russian officials.

The United States this time is afraid that Russia is planning more than it says it is doing. For them, there is no proof that it is really some planned exercise for the Russian military forces because also nothing was previously made known.  They are afraid that it could be a hidden preparation for an invasion and therefore warned European allies that Russia could be plotting to invade Ukraine in a repeat of the 2014 annexation of Crimea.

The Ukraine–European Union Association Agreement is applied by the EU (green), Ukraine (orange) and former EU member the UK (blue) during the transition phase

If the West refuses to meet Putin’s concerns over NATO expansion to Ukraine, Russia shall provide measures to secure the Russian allies. More than once, Putin, who is now seeking to dismantle the entire post-Cold War European security architecture and re-establish a Russian sphere of influence over Eastern and Central Europe, repeated the Russian position that NATO membership for Ukraine is a red line he will not allow to be crossed. 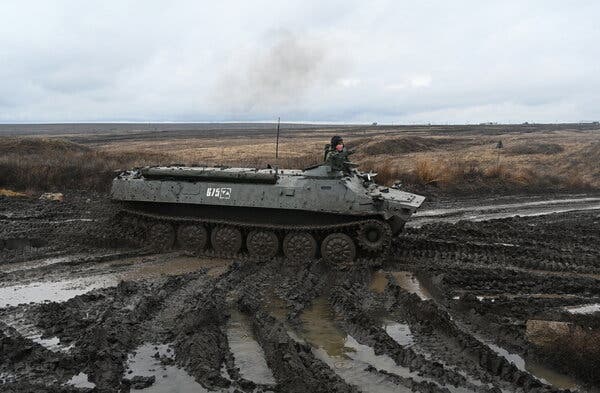 But the United States and other NATO countries also made it clear they will not deploy their forces to Ukraine to repel a Russian invasion. Putin has shown a willingness to use military forces or to go to war in Ukraine and threaten to expand the war, making the Russian threat persistent.

Presidents Biden and Putin have held several video and phone conversations in recent weeks, where it looked like they would be not interested in an escalation. But Europe and the states know also that Russian annexation of some or all of Ukraine would increase Russian manpower, industrial capacity, and natural resources to a level that could make it a global threat.

Currently, Russia has just under 60 battalion tactical groups on the ground, or somewhere between 85,000 and 100,000 troops, according to American officials. Those troops have conducted exercises and drills, demonstrating that the Russian forces are at their highest levels of readiness.

The Kremlin’s primary goal is a guarantee that Belarus, Ukraine, and Georgia will never belong to a military or economic bloc other than the one’s Moscow controls and that Russia will be the ultimate arbitrator of the foreign and security policy of all three states.

The economic pain of Western sanctions, Putin is willing to take as a price worth paying for the decisive geopolitical gains he envisages from a successful Ukrainian campaign. He also knows Europe needs ‘his gas’.

In response to the Russia-Ukraine conflict, NATO has reinforced its support for capability development and capacity-building in Ukraine. The Allies condemn and will not recognise Russia’s illegal and illegitimate annexation of Crimea, and its destabilising and aggressive activities in eastern Ukraine and the Black Sea region. NATO has increased its presence in the Black Sea and stepped up maritime cooperation with Ukraine and Georgia.

Throughout the crisis, regular consultations have taken place in the NATO-Ukraine Commission (NUC) in view of the direct threats faced by Ukraine to its territorial integrity, political independence and security. The NUC met for extraordinary meetings in view of Russia’s unjustified use of military force against Ukrainian ships near the Kerch Strait in November 2018 and Russia’s threatening military build-up in April 2021. Another meeting of the NUC took place at NATO Headquarters this January 2022, focused on Russia’s continued military build-up.

In parallel to its political support to Ukraine, NATO has significantly stepped up its practical assistance to Ukraine. Immediately following the illegal and illegitimate annexation of Crimea by Russia, NATO Foreign Ministers agreed on measures to enhance Ukraine’s ability to provide for its own security. They also decided to further develop their practical support to Ukraine, based on a significant enhancement of existing cooperation programmes as well as the development of substantial new programmes.

NATO Secretary General Jens Stoltenberg on Thursday the 16th of December 2021 welcomed Ukrainian President Volodymyr Zelenskyy to NATO Headquarters to discuss Russia’s substantial military build-up in and around Ukraine. With tens of thousands of combat-ready troops, tanks, artillery, armoured units, drones, electronic warfare systems, they do not see a sign that this build-up is stopping or slowing down.

NATO over the last years has seen a pattern of Russian aggressive actions. NATO Allies have demonstrated the ability to respond. Since Russia’s illegal annexation of Crimea in 2014, NATO has implemented the biggest reinforcement of their collective defence in a generation. Today we should worry about how this matter is going to develop because NATO will continue to do what they consider necessary to defend and protect all NATO Allies.

Fitting the bill in the North and in the East

From a land 90 times Belgium: Kazakhstan #2 Natural wealth attractive to Russia as well as Europe

From a land 90 times Belgium: Kazakhstan #3 Kazakhstan in the grip of a dictator

The world on the very brink of conflict