The ‘Great Ruler of Russia” has taken already several occasions to show he is the most righteous leader of Mother Russia. He has taken on the airs and graces of a Führer, but in his manner of speaking or delivering speeches, he cannot compete with the better-known Führer who, like him, also managed to murder masses of people. In that respect, Putin is also well on the way to causing a true genocide. 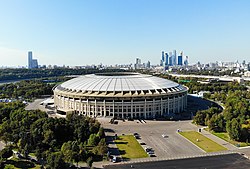 The originally named Lenin Stadium, now the 78,360-seat Olympic Stadium Luzhniki, in the Russian capital Moscow in the bend of Moskva River, in the district of Luzhniki.

As part of an anniversary of the annexation of Ukraine’s Crimea (8 years ago) the Russian leader, the day before yesterday, addressed millions of Russians at home, glued to the television to hear what their great leader had to say and eager crowds, in and outside the Grand Sports Arena of the Luzhniki Olympic Complex or vast Luzhniki stadium, that hosted the 2018 men’s football World Cup final and Manchester United’s defeat of Chelsea in the 2008 Champions League final.

Moscow police said more than 200,000 people were in and around the Luzhniki Stadium. To the international press, it was more that there were 80 000 people inside and 20 000 outside the stadium waving Russian flags and chanting “Rossiya, Rossiya” (“Russia, Russia”), many having also painted the Russian flag on their face, chanting as the man in the middle of the vast Luzhniki stadium vowed to “accomplish all of our plans”, while quoting chapter and verse from the Book of John.

There is no greater love than to give your life for your friends’,

An unnamed woman told Sova Vision, a Russian media outlet, that she had no alternative.

“We were put on a bus and brought here,”

There were claims that some people went, had their tickets stamped and then left immediately without having to listen.

Students said they had been given the day off lectures if they went. Putin’s supporters waved Russian flags and banners with the “Z” symbol that has been painted on all the Russian vehicles that have invaded Ukraine. The event’s hosts even wore ribbons folded in the Z-shape in their lapels.

Russia has a long history of state employees being coerced to attend pro-government rallies.

Praising the soldiers who are on a peace mission, avoiding a genocide

Putin sought to justify his actions during his speech by repeating his unfounded claims that Ukraine was committing genocide in the Donbas region.

“This really was genocide. Stopping that was the goal of the special operation,”

Putin praised those Russian men who were fulfilling the great peace mission, avoiding that the Nazi Ukrainians would continue their genocide. Though I think we may be more assured that Putin is the one who is fulfilling a genocide.

One Russian commentator suggested that his tub-thumping speech was akin to “Billy Graham meets North Korea”.

“We know what we need to do, how to do it and at what cost. And we will absolutely accomplish all of our plans,”

Putin, 69, told the rally from a stage decked out with slogans such as

“For a world without Nazism”

The Z symbol Za Putina (For Putin) unifier of the nation

Many of the Russian slogans used at the rally incorporated the “Z” symbol that Russian forces have used as a motif in Ukraine. Many also had the Z symbol on their jackets. One could also see the slogan “Za Putina” – “for Putin”.

Putin said the soldiers were brave men, coming to help the Ukrainians, saving them from those terrible Nazi’s who rule that land which is part of that beautiful great Russia. He praised their courage in what Russia calls its “special military operation” in Ukraine and which has demonstrated the unity of Russia.

“Shoulder to shoulder, they help each other, support each other and when needed they shield each other from bullets with their bodies like brothers. Such unity we have not had for a long time,”

The so-called lifestreaming did not go without a hitch. Putin was mid-sentence

when the state television feed cut out to be replaced by a pre-recorded clip of a band playing patriotic music.

Had the president collapsed? Or had there been a coup?

Alas, the fault lay with a technical broadcasting issue.

Russian viewers were able to watch the speech in full a few minutes later. Such a mishap is highly unusual for the Kremlin’s well-oiled and tightly controlled propaganda machine. One possibility is that the state broadcaster might have been hacked and the transmission disrupted.

Dmitry Peskov, the Kremlin spokesman, later said it was due to a

“technical glitch on a server”.

It was not immediately clear why the server issue led to such an abrupt and unusual interruption.

Before Putin spoke, Russia’s stirring national anthem, with the words

“Russia is our sacred state”

boomed out across the stands of the stadium with more modern pop hits such as “Made in the U.S.S.R.”.

Putin’s favourite Russian band, Lyube, sang patriotic songs about war, sacrifice and the honour of those fighting for Russia.

Pan-Slavist poetry by the Russian writer who was remarkable both as a highly original philosophic poet and as a militant Slavophile, Fyodor Tyutchev, whose verses warned Russians that they would always be considered slaves of the Enlightenment by Europeans, was readout.

No illusions about ever relying on the West

Russia has lost any illusions about ever relying on the West and Moscow will never accept a world order dominated by the United States which is acting like a sheriff seeking to call all the shots in a saloon bar, Foreign Minister Sergei Lavrov said. (read more ) 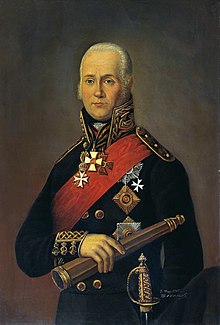 Portrait of Fyodor Fyodorovich Ushakov painted by Peter Bajanov, circa 1912.

“once said that these thunderstorms will bring Russia glory,”

The OVD-Info rights group which monitors political arrests reported that at least seven independent journalists had been detained ahead of or while covering the event or a similar one in St Petersburg.

Praising the Russian soldiers on a Peace mission

Putin continues to maintain that he is not attacking Ukraine but is on a peace mission there and is coming to the aid of the citizens to prevent a genocide.

“Shoulder to shoulder, they help and support each other”,

he said, whilst the crowd, of a lot of youngsters, cheered and waved enthusiastically with their little flags.

“We have not had unity like this for a long time.”

The president congratulated Crimeans for choosing Russia and said the peace mission (it is not acceptable to call it a war) in Ukraine was to protect Russian speakers in the country’s east, which has been mired in a Moscow-fuelled separatist insurgency for the past eight years, but now those Russian soldiers would liberate those terrorised Slav people.

“To free people from that suffering, from that genocide – that was the main reason, the main motive and goal of the military operation that we launched in the Donbass and Ukraine,”

he said, adding that Russia will definitely achieve all its goals’:

“We know what we need to do, how to do it and at what cost. And we will absolutely accomplish all of our plans.”

The fact that his plan did not roll out as quickly as he first claimed (namely that he would liberate and denazify Ukraine in less than three days) is hard for him, but he does not let it show.

Purification for a pure Russian race

Putin makes no bones about what he wants. 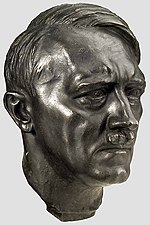 Bust of Adolf Hitler made by Arno Breker. During the Nazi regime in Germany, a copy of this bust of Der Führer was prominently displayed in many government buildings, town halls and courtrooms.

He goes for purification. Even though he did not have a voice as inspiring as Hitler‘s, one could not help thinking of speeches by the Führer in the 1930s.

Like that führer of last century, Putin knew how to elaborate on two themes: enmity for the ‘other’ and solidarity among ‘real Russians’.

Just as Hitler played on the pure race, Putin said that we should now strive for one pure race of Russians, in which no watered-down versions are allowed. He ended his satisfaction by noting that in that stadium, he found Russians who belonged

‘to a pure, superior Mother Russia.

With his thunderous sermon, Putin defined the two camps and eliminated the greyscale.

‘Whoever is not for us is against us.’

For Putin, it is also clear that there are westernised Russians who do not belong in their community.

“You can be for or against, but nothing in between.”

The other camp which the Russians should not allow to exist, in this case the westernised Russians, is presented by the Russian leadership as impure, distant from their own group and inferior. References to insects, such as the fly, serve to dehumanise this ‘other camp’.

This is important, now that mothers of soldiers are starting to stir and Putin will also have to justify why so many soldiers are returning in body bags. Because a lot more Russian soldiers have already died than Putin probably thought would happen.

The performance in the stadium is part of the great propaganda show that we are now seeing more of. When a totalitarian state is slipping away and people cannot be convinced through propaganda, they more often switch to terror and with his speech one could feel the undertone, of

you have to watch out,

either you’re for us

Continue: Full speech of President Vladimir Putin delivered on 18.03. 2022 in the Great Sports Arena of the Olympic Complex Luzhniki

Why Putin’s Attack on Ukraine Could Mean World War 3

The biggest ground offensive in Europe since World War II

Key Facts About Ukraine and the Russian invasion

Will the Russian War in Ukraine reset World diplomacy?