After the fall of the Berlin Wall and the collapse of the Soviet Union, the symbols of the capitalist states were able to conquer Russian territory. In the big cities, those marks appeared in Russia that we can find in every city in Europe.

It was the CEO of McDonald’s Canada, American-Canadian citizen George Cohon, who first latched onto the idea of opening a McDonald’s in the Soviet Union after bringing Soviet representatives to a McDonald’s during the 1976 Montreal Olympics. 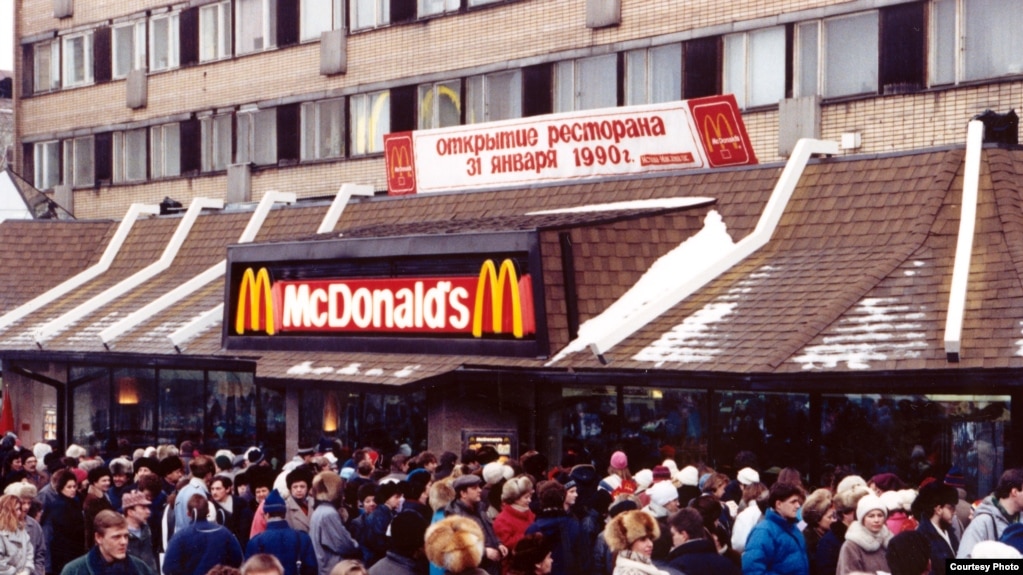 This was the scene on opening day outside the McDonald’s restaurant on Moscow’s Pushkin Square, Jan. 31, 1990. (McDonald’s photo) 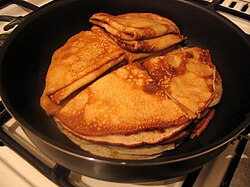 In 1990 appeared the first American multinational fast food store McDonald’s in Moscow, with endless queues to get a taste of the American way of life. The chain was very surprised:

For many Russians it was an incredible eye-opener, them being able to select various dishes from an open-counter display.

The opening scene on Pushkin Square seemed to lay bare those contradictions; while shortages of basic necessities were common in Soviet stores, McDonald’s — almost magically — never ran out of food. The secret was that the company had negotiated to set up a private manufacturing plant within the Soviet Union — unheard of at the time — while importing 80% of whatever else was needed. It was effective but far from perfect; the company operated at a loss. There were problems from the Soviet customer’s point of view, too, for the Russians the Mc Donald’s servings were very expensive, an average meal costing more than a half day’s wages.

McDonald’s later was also smart enough to start selling special burgers with ingredients 100% made in the Russian Federation such as cheese, bread, tomatoes, beef, bacon, and lettuce. They launched in 2015 the “Биф А-ля Рус (Beef à la Russe)”, designed to be authentic Russian native hamburgers. They also served chicken wings and shrimps.
The McZavtrak (McBreakfast) menu offered cheesecake rolls, the typical pancakes traditionally made from wheat or (more rarely) buckwheat flour and served with smetana, tvorog, butter, caviar and other garnishes, blini, among the most popular and most-eaten dishes in Russia.

“McDonald’s was more than the opening of a simple restaurant,”

“It came to symbolize the entire opening of the USSR to the West.” 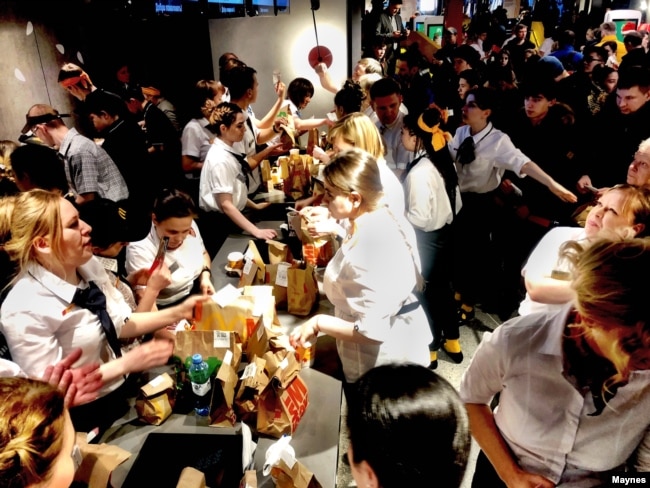 To celebrate the McDonald’s “Golden Arches” which first lit up on Moscow’s Pushkin Square to great fanfare on January 31, 1990, marring the celebration were city authorities’ concerns over an outbreak of the coronavirus in neighboring China.

The restaurant had marketed a day of Soviet-era pricing, with hamburgers costing their original 1990 3 ruble price tag, but canceled the event amid government fears a Soviet-era line would pose a health hazard.

Coupons were issued instead for the thousands who arrived anyway.

“All I remember is we waited a long time,”

Andrey, 53, said, recalling his first bite, a month after the initial opening.

“The lines were huge.”

The Moscow launch set company records at the time, with the most customers ever served in one day.

The event was intrinsically linked to Russians’ desire for Western-style market reforms under former Soviet leader Mikhail Gorbachev’s policy of perestroika, or restructuring.

On March the 8th 2022, McDonald‘s, Starbucks, and Coca-Cola became the latest major American companies to announce that they were suspending operations in Russia in response to its invasion of Ukraine. At that time

“McDonald‘s has decided to temporarily close all our restaurants in Russia and pause all operations in the market,”

Most McDonald‘s restaurants around the world are owned by franchise operators, but in Russia the fast-food giant operates 84 per cent of its 847 locations, employing 62,000 people.

Pepsi-Cola said it was suspending sales of its beverage brands in Russia, but continuing sales of some products, including baby food.

Russian President Vladimir Putin said at the beginning of March that he would support a law to nationalise assets of any company that wanted to pull out of Russia due to the Ukraine invasion. But he could not avoid “the McDonald’s” disappearing from the streets.

McDonald’s has in the UK been accused of dodging the payment of £295 million in taxes through byzantine accounting practices while picking up £872m in Covid-19 support, according to a damning new report. I do not know how much money from Russia found its way to Great Britain, but the group’s Owen Espley said:

“McDonald’s has been driving billions of its global income through the City of London — but not stopping to pay its fair amount of UK tax.

Together with its anti-union stance, the burger giant’s practices generally reflect the substantial downsides associated with the growth of unbridled corporate power, market liberalisation and globalisation. In response, a diverse, grassroots and global movement has blossomed to demand accountability for its prominent role in the homogenisation of consumer culture, the growth of low-paid and precarious employment and environmental degradation.

We can see that wherever they appeared on the market, they had a great influence on the food preferences of the local population. However, in each country, including the Russian Federation, they tried to bring adapted menus.

In terms of the payment of their staff, this was not so good everywhere, but in Russia the workers were not really heard to complain, except that they sometimes had to stand up too long. According to rumours, when the fast food restaurants closed there was taken care of the workers finding them another job. (I could not have this confirmed.)

Corporate logo on red background with the wordmark, used in the 1990s and early 2000s

On Monday May 16 McDonald’s, which had invested millions in Russia, announced that it planned to sell its Russia business after 32 years. It paused operations in the country two months ago due to Russia’s war in Ukraine.

“This is a complicated issue that’s without precedent and with profound consequences,” 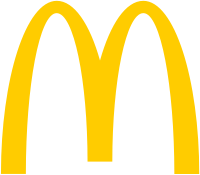 McDonald’s CEO Chris Kempczinski wrote in a letter to franchises, employees, and suppliers that The New York Times obtained. This weekend we could see the last yellow M coming down from one of the buildings.

Numerous restaurant chains and consumer product manufacturers have suspended operations in Russia since it invaded Ukraine on Feb. 24, including the largest coffee-house chain in the world, Starbucks and the fast-food restaurant Yum Brands, the parent company of Kentucky Fried Chicken (KFC) (of Tricon Global Restaurants, second in the world only to McDonald’s) and the world’s largest pizza chain by the number of locations, Pizza Hut, which is also a subsidiary of Yum! Brands, Inc., one of the world’s largest restaurant companies. 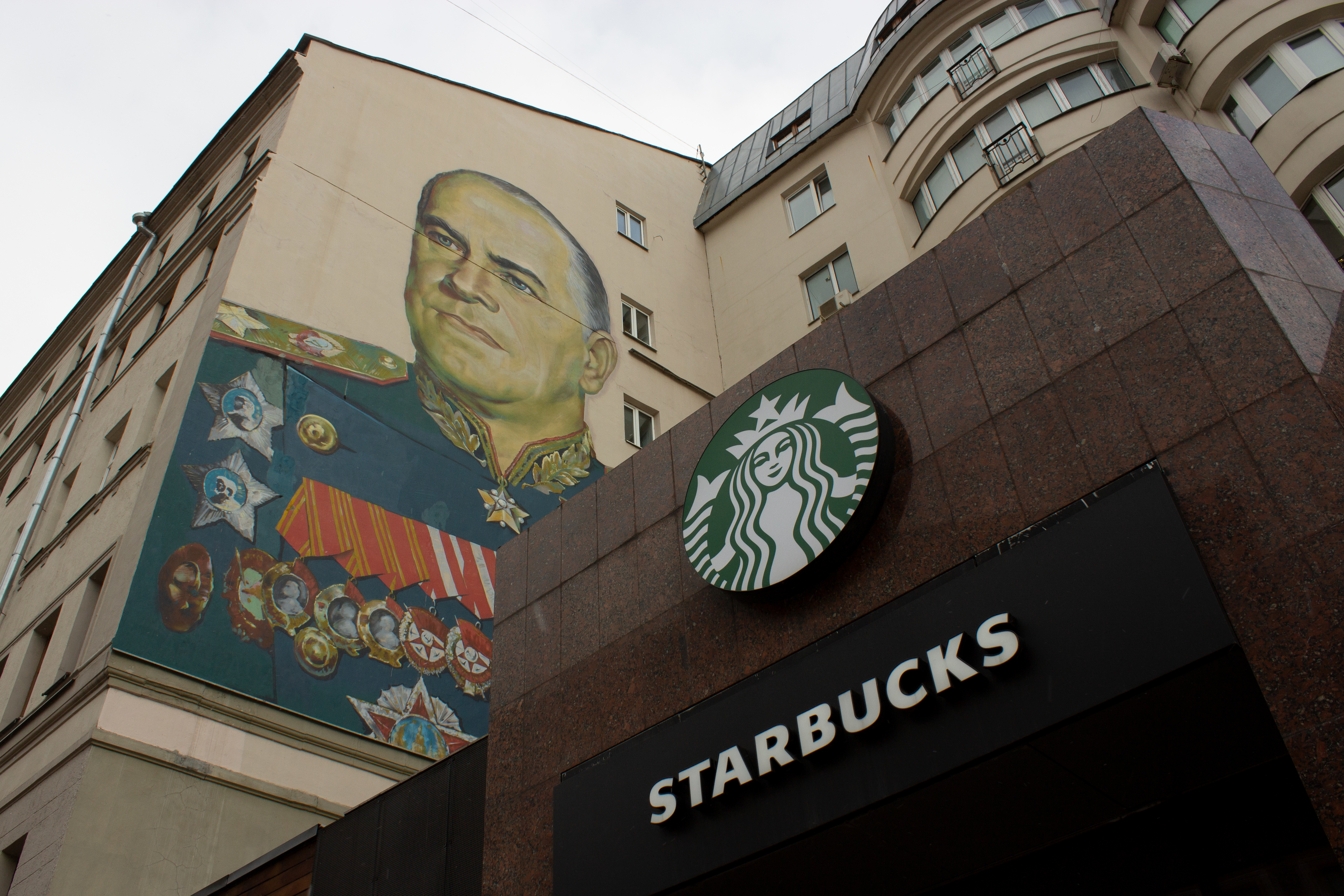 A Starbucks sign is seen alongside the mural of Georgy Zhukov, a Soviet general – Da svidania. – Photo by Vlad Karkov/SOPA Images/LightRocket via Getty Images

Starbucks, with 130 stores in Russia, announced Monday May 23 that it is leaving Russia after operating in the country for 15 years. The coffee giant joins a rising number of companies from the United States and other countries that have decided to exit the Russian market over Moscow’s invasion of Ukraine. They follow McDonald‘s, Exxon Mobil, and British American Tobacco have already announced they are ending operations in Russia. Starbucks said it would pay its nearly 2,000 Russian employees for another six months and help them find other jobs. Starbucks had already suspended its Russia business activities on March 8, closing cafes and halting shipments of Starbucks products.

Starbucks did not say what will become of its business partner, the Kuwait-based Alshaya Group, which operates Starbucks throughout Eastern Europe, North Asia, and the Middle East.

McDonald’s, the world’s second-largest private employer with 1.7 million employees (behind Walmart with 2.3 million employees) has 39,000 restaurants in over 100 countries. The company has become a symbol of globalisation and the spread of the American way of life. It had integrated very well during those few years in Russia and had made that American world of use known to the younger generation as a pleasant and easy place to stay and digest.

After Russia’s invasion of Ukraine, not only did those American and capitalist status symbols disappear, along with the soft drinks linked to them. On several levels, the Russians see their diet under attack as many products are no longer available in the shops.