Vote of no confidence or trust in the United Kingdom

Beginning of the end for Boris Johnson

U.K. Prime Minister Boris Johnson at one of the gatherings at which some attendees breached Covid regulations. The other participants were made unidentifiable by Sue Gray in this image from her report.

Incredible, after all the lies and absurdities, the Tories in the UK still did not need it necessary for their clown to step down. The Tory leader, who has undermined British values by “downgrading, debasing and demeaning” the standards expected of ministers in public life, survived a confidence vote by his party’s MPs on Monday evening.

The head of the government of Great Britain imposed all kinds of rules and restrictions on the population, which he and some other heads of government and his top aides, did not abide by and continued to meet as if nothing had happened, while the British themselves had to limit their contacts.

Johnson more than once said rules had been followed, and Downing Street denied that a  party took place. Downing Street apologised to Queen Elizabeth II for two events on 16 April 2021, the day before Prince Philip’s funeral, during the third lockdown across England. There were further parties in the garden of 10 Downing Street during the first national lockdown, with drinks on 20 May 2020, and a gathering celebrating Johnson’s birthday in June 2020 followed by another one on 14 December 2020 with Conservative Party staff.

After the Prime Minister amended the rules following the partygate scandal so that those found to have breached the code can get away with not resigning by apologising or temporarily losing pay, there was pushed for a ‘Vote of no confidence or trust’.

Speaking in the Commons, Shadow First Secretary of State,  Deputy Leader of the Labour Party since 2020, Angela Rayner accused Mr Johnson of

“rigging the rules that he himself is under investigation for breaching, downgrading standards, debasing the principles of public life before our very eyes.”

“There is nothing decent about the way that he has acted.”

And on Saturday one could hear that a lot of people think the same way, booing at him when he went up the stairs of St. Paul’s Cathedral for the Platinum Jubilee celebration.

Public disquiet over the events led to a decline in public support for Johnson, the government and the Conservatives, and is thought to have contributed to the party’s loss of the 2021 North Shropshire by-election and poor performance in the 2022 local elections.

One can wonder what those politicians still do have to have more before they are going to get rid of that Pinocchio, whose nose can’t grow anymore because it has been between too many doors. The same as the American clown he is not willing to step down, but hopefully, it will not come to a point where this going to be such chaos or tumult, that the whole country shall be degraded in the eyes of the foreigners. In Britain, the politicians should also come to see that their democracy is also in danger like the American democracy is as well.

“This Prime Minister’s example of leadership [is] illegally proroguing Parliament, breeding a Downing Street culture where his staff felt able to break lockdown rules including himself, putting the very standards that underpin our democracy to the shredder.”

Former Tory minister John Penrose, who was opposed to Brexit prior to the 2016 referendum, but after it supported the official position of his party as an advocate of leaving the European Union, suggested that there had been a “material breach” of the Ministerial Code, since Mr Johnson had failed to publicly address “serious failings of leadership” highlighted in the Sue Gray report.

For sure, we can not deny, that the prime minister’s future is under intense scrutiny after he scraped through a vote of no confidence on Monday night, with 41 per cent of Tory MPs actively voting for him to go. Though he said he has a major victory, we would not consider that, with his feet barely over the ditch. It also seems that Boris Johnson’s own strategist is concerned the prime minister doesn’t have “enough fight in him” for the next general election. Though it is deputy chief of staff at No 10 David Canzini his job, having been hired in February this year to help with the fallout of the Partygate scandal, to ensure the Conservative Party wins the next general election.

They will, however, be rebuked for their undecidability and for their loyalty to the shaking Prime Minister with his tangled hair. The repeated apologies have come across as laughable to most people, with good reason, because it was just ‘blathering’ as one expects from bullies and braggarts. One expects otherwise from someone who really wants to serve the country to the best of his ability. He himself should realise that his glory years are over and that it is high time he stepped down.

There has been a landslide election victory for Boris Johnson and his Conservative Party in 2019. At that time, one could say he loomed as a colossus over British politics, having his hands joined with Farage and redrawing the country’s political map with a vow to “get Brexit done.”

Several people, himself included, seemed assured of five years in power, with an 80-seat majority in Parliament, the greatest amassed by a Conservative leader since Margaret Thatcher in 1987. Some analysts predicted even a comfortable decade in 10 Downing Street for Mr Johnson, the most reliable vote-getter in British politics.

Just two and a half years after Mr Johnson’s triumph, he does not want to see the seriousness of 148 of 359 Tory lawmakers voting against him.

It is one of the most head-spinning reversals of fortune in modern British political history. {How Boris Johnson Shattered His Own Invincibility}

The coming months shall not be so easy for Mr Johnson, his party members either keeping their eyes shut, or opening them and coming to listen to the general public, disgruntled with that man on the top and not willing to vote for the Conservatives this time.

“Johnson’s such an accomplished escape artist, and his colleagues so craven and cowardly that you can’t rule out him living to fight another day,” {How Boris Johnson Shattered His Own Invincibility}

said Tim Bale, a professor of politics at Queen Mary University of London.

“But for what precisely? ‘There’s no there there,’ as the saying goes.” {How Boris Johnson Shattered His Own Invincibility}

Former Tory leader Lord Hague said that the damage done to Mr Johnson’s premiership was severe and that he should quit rather than prolong the agony. He added that he would have “regarded as untenable” a situation where more than a third of MPs voted against his leadership.

“residual concerns from across the party will continue to remain.”

There have already been many other scandals than party gate. Perhaps some Tories think the people will soon forget. Perhaps Mr Johnson also thinks the majority of the British people have dementia or are just easy to appease and talk down. But he and his supporting party members will have to be surprised at the next elections, where they will get the lid on their nose.

“a matter of months.”

Tory MP Julian Lewis attacked Mr Johnson for having an

“aversion to scrutiny, bordering on contempt for the Commons,”

“impropriety at the top of government is impossible to defend.”

People may well be aware or may defend him with apologies, that a number of catastrophic global events outside of Johnson’s control — like the COVID-19 pandemic, rampant inflation, and a war in Ukraine — have also compounded his problems. But all these things do not outweigh how he has made the people look foolish and humiliated them by laughing at them for abiding by the restrictions he imposed when he did not abide by them at all.

At the counterparty, Labour deputy leader Angela Rayner said that it was clear from the vote that Tory MPs

However, it may be more likely to be a boar that has suffered gunshot wounds but will continue to rage furiously.

By now, people should be convinced that

“He cares about one thing — himself.”

In Parliament, all the departments have not been able to deal with issues that real people are facing at the moment, because they’ve been too fixated on trying to save Boris Johnson, and have spent too much time in ridiculous debates and lashing out at each other.

SNP Westminster leader Ian Blackford described the PM as a

warning that he will

“pay a price for his behaviour.”

And that is the least one can hope for. Certainly when that Prime Minister after the voting signalled that he would do everything that he’d done all over again.

… it’s that signal that the rules don’t apply to him the way that they do for everyone else.

Giving the indication that

“Rules are for little people, but not the Prime Minister.

“That’s not the behaviour of someone who can remain in office, it’s someone that quite simply needs to be removed from office.”

said the Member of Parliament (MP) for Ross, Skye and Lochaber since 2015

“Tory MPs dutifully obliged. A government of the rich, by the rich and for the rich.”

The rich may be cosy fine in their big mansion, but ordinary people are going to find it tough in the coming months. Economically, it shall not be going so well for the majority of the population. An economic crisis bringing clouds over the rest of this year — and probably well into the next, shall spell trouble for the Tories, Johnson or no Johnson.

We shall see if he can make it up to October this year.

In the past, we have seen the Iron Lady, challenged in her 11th year as prime minister and her 16th year as leader of the party. The economic boom of 1987 had given away to rising inflation which had reached 10 per cent, causing interest rates to reach an unsupportable 15 per cent. She too had to face the political arguments about Europe, this time about joining a single currency.
Although Mrs Thatcher won, with 204 to Michael Heseltine’s 152 she also had to achieve a 15 per cent margin and was just four votes short, which meant a second ballot. After consulting all her cabinet individually she concluded she should not run and withdrew. 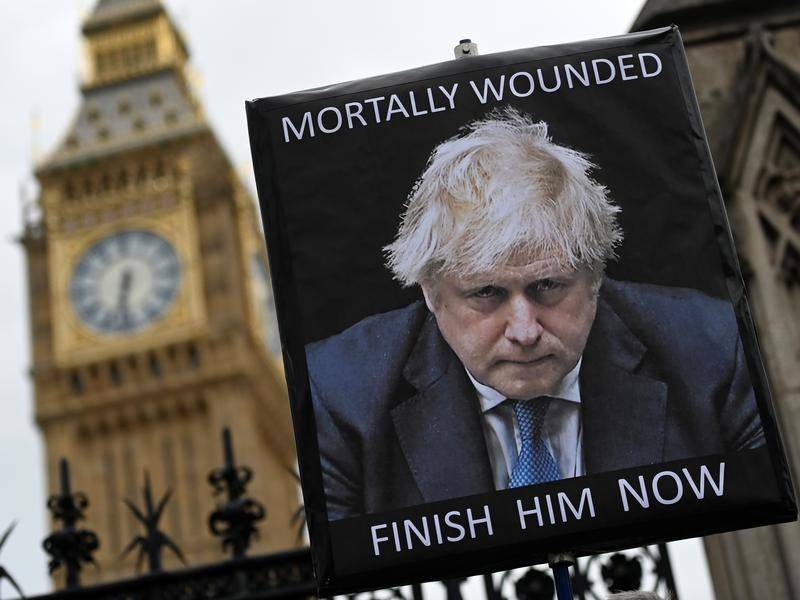 Only a lunatic would want to inherit the shit show he’s created. – Bojo the clown, Boris Johnson