What would your impression be when you find a group of people drinking lots of beer and dancing to a playlist that combines German heavy metal rock — the kind favoured by neo-Nazis — with traditional Jewish tunes like “Hava Nagila” (“Let us rejoice”)? They, laughing with Jews, presented at Aalst Carnival a float driven by men wearing Haredi costumes, fake hooked noses and silver face paint, featuring a large parchment sign proclaiming six “regulations” handed down by the made-up “Jewish festival committee.” They included:

“No Jews in the procession; no mocking Jews; don’t ever tell the truth about the Jew; what the Jew wants will happen; all drugs and black money is ours.”

The many carnival revellers who said that the truth about the Jews had to be told, at some point gave a clear sign that they had a hatred of Jews in their hearts which is deeply rooted by their frustrations (for their own lesser situation). 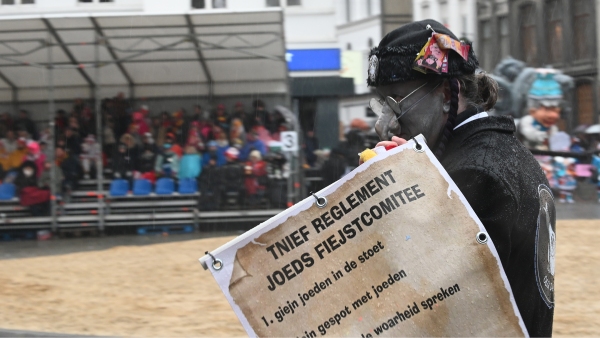 A man wearing a fake hooked nose and carrying a sign warning readers not to “tell the the truth about the Jew” at the annual procession of the carnival in Aalst, Belgium, Feb. 23, 2020. (Cnaan Liphshiz)

We do know, the people from Aalst do not mind to mock with Jews. In 2013, we could see certain participants dressed like Nazis walking around wearing cans labelled “Zyklon B” — the poison that the Nazis used to kill Jews in gas chambers. This year there were many who treated the spectators with their representation of the political police of Nazi Germany, the Gestapo. One might wonder if those revellers wearing shiny black long coats and red armbands, that was clearly meant to evoke the Nazi uniform, would really understand the impact of such representation on people of the older generation. I sincerely can not see the fun of it, certainly when you hear how they talked about Jews, democratic institutions and democratic politicians.

Last year, one float featured two effigies of Haredi Jews holding bags of money. One had a rat on his shoulder. This year a group went further and dressed themselves in ants, giving the impression

“Jews are vermin we have to get rid of, because they always moan at a wall though they have nothing to complain about, them being the moneymakers of this world”

(hence the Western Wall in gold-coloured blocks) in the Flemish dialect of Aalst ‘Muur’ being (Oilsjts) ‘Mier’, which is in Flemish and Dutch the insect “Mier” or “Ant”.

Last year’s float with the Jews counting their money, spurred UNESCO to strip the carnival of its credentials as a world heritage event. The group that prepared the float insisted that it wasn’t meant to offend. I wonder what this group really wanted to express and if they are aware how some observers could be shocked by what looks like a reference to the rich history of depicting Jews as vermin in Nazi and other anti-Semitic propaganda.

For many inhabitants of Aalst it might all be just a joke, like it was considered too in the 1920ies and 30ies.

This year it was really over. The few pictures which we could see on the television screen were revolting. Disgusting to hear Flemish people talk that way about other people. In any case, the major of Aalst, Christoph D’Haese from the right-wing party N-VA (the New Flemish Alliance) got what he wanted, a town which profiled itself as anti-Semitic, having the right to say they want all those people, they do not want to have in Belgium or in the future state of Flanders, out of this country.

But Belgium is not the only country where anti-Semitism is on the rise and carnival revellers love to present Jews and Nazi’s in the carnival parade.

In Campo de Criptana, a municipality and town in the province of Ciudad Real in the autonomous community of Castilla-La Mancha (Spain), they also love to shock. There they also loved to make fun of the murder of millions of Jews by the Nazis.
A carnival troupe danced through the streets of that Spanish town dressed like Nazis and Jewish concentration camp prisoners next to a float made to look like crematoria, sparking outrage from Israel’s embassy in Madrid and Jewish groups.

The town council of Campo de Criptana said permission for the display of dancers wearing striped outfits to look like those of concentration camps, while waving flags of Israel followed Nazi officers in a Holocaust-themed procession, put together by the El Chaparral Cultural Association, had been given on the understanding that it would commemorate the dead of the Holocaust. But it is difficult to see in that presentation a sincere respectful commemoration of the horror that flooded this part of the world in the previous century.

In Aalst, for the press, the mayor posed for pictures against the float that read

“don’t ever tell the truth about the Jew.”

D’Haese had also defended the 2019 display when UNESCO called it anti-Semitic, saying the condemnation

“takes the display out of the context, which is one of satire.”

He has additionally stressed how the Aalst Carnival mocks Christians, Muslims, Asians and blacks, whereas the outrage is only over mockery of Jews.  For the last two carnival parades, you might say his point is partly true. Five years ago the Muslims were also mocked at and this year some floats featured Asians with screw heads for eyes and black people with exaggerated lips.

At the moment we can see an evolution of growing anti-Semitism which we can not allow in our regions. European nations must collectively fight this anti-Semitism and