A Classic Editor versus Block Editor

WordPress appears to have fallen off its best horse Continuing

Youghal Web Design seems also not pleased, like so many, with the changes WordPress made.

It’s all in the name ‘classic’ classic infers something that worked- that’s quintessential and time honoured but now we’re moving on: classic is dead-classic is dead. {Classic Editor v Block Editor}

Like any sound person would think and question is, why would one change a system that is working very well?!

Sometimes you wonder is it that software developers are sitting there navel gazing wondering is there anything to do? {Classic Editor v Block Editor}

If the changes proposed would make something better, no regret and only happy faces. But Now, with this Gutenberg Block editor?!

Funny enough it says you best use a feature picture, but I did not find a way to include it by my previous post. With the Classic editor, it was so easy to add pictures wherever one wanted in what size one wanted at what place one wanted.

You want to add media well no problem: press the add media or + and there you have it. But with block it is so tedious and mind numbing and super unfriendly- it must have been a bad pizza day when they came up with that block head idea. {Classic Editor v Block Editor}

Raised by a Narcissist, the writer of Lucky Otters Haven, hates the Gutenberg editor like me who is not thinking in blocks, like probably most writers do not. He writes:

I know numerous bloggers have complained about this forced change, but all we get from the WP staff is some passive aggressive comment about

“being unwilling to learn something new”

and a condescending attitude. They don’t care about writers anymore. As soon as Gutenberg becomes the only choice in 2022, I’m gone. Probably to Medium, which seems to be a better platform for people who want to write. {I want the Classic Editor, not this block garbage.}

Liz is also one of the bloggers who only sees an escape:

I think WordPress will find themselves affected, with a lot leaving through this drastic change they made. I can’t see how they won’t.

I sincerely hope WordPress shall change course, and will have ears to the many bloggers who used their system for already a few or many years. In case they prefer to promote their new Gutenberg system that they allow those who prefer the old Classic system, to use that more practical editing system which has proven its qualities.

Like many others, the already frustrated writer of the Lucky Otters haven looked it up in the forums how he could go back to the Classic editor.

and all I saw was that it can be accessed from the Admin page. That’s it. Well, I did that, and looked everywhere on the Admin page, and see absolutely NOTHING giving me the option to switch back to Classic. I even went to the Edit page (as if writing a new post) and clicked on the three small dots at the top (because that has worked in the past), and there is no option for Classic. {I want the Classic Editor, not this block garbage.}

I do hope he shall find my previous posting giving a good solution the Canadian Minh brought forward, but does not seem to work for the picture, because that was set at 600 pixels and appeared horrible (I left it now as a proof of the failure of both the Gutenberg and the Classic with the not coherent new editor).

centering pictures- is unnecessarily complex between the searching among all the little icons – and trial and error. {philosophermouseofthehedge}

I noticed some are already moving to another blog system.

Nyssa The Hobbit found Mustapha Hamoui who already made the change:

There are many reasons why I decided to move to Medium, despite being something of a purist in owning your own website:

Nyssa The Hobbit followed the controversy online before they first introduced Gutenberg, and saw how anyone who complained got ridiculed. She writes:

They were told that users would LOVE it and only developers were complaining. Then they said that bloggers would LOVE it because it would be easier for them to use. Otto, especially, can be mean to people, both developers and people complaining in the support forums. If you say you can’t get Gutenberg to work, Otto ridicules you like you’re just old and don’t like change.

If you go to the WPTavern blog, you can see how they constantly praise Gutenberg and say that, a year+ after they introduced it, it’s working much better and people LOVE it. Of course, people do still complain in the comment section from time to time, though they’re heavily moderated there.

This is why ClassicPress was developed for the .org version. A lot of people felt the same way, not just about the changes but about the authoritarian moderation in the support forums and WPTavern. Of course, to go with CP you have to have your own website, and that costs $$. I don’t know if CP will ever do a .com version, but from what I understand, it’s not their day job.

My son, for his commercial(paid) website, has gone for another system which is based on the Classic WordPress, which seems to work great and handy for both the webdesigner as well as the webreader or webuser to order products.

Something about nothing warns the WordPress people:

I won’t die being forced to use the Gutenberg editor to write my posts. But it sure has killed off the enthusiasm for WordPress for making such a faux pas move on users. Sure, we are free users but your empire was built upon the heads of free users who made the jump from other blogging platforms long ago for better reasons then.{Force fed.}

In October 2018 an old computer nerd who wants to motivate others wrote already:

When I looked at the result of Gutenberg, I was rather disappointed. Every block has a label round it defining its start and finish. We don’t need the labels – we can see if a piece of text is a paragraph or not, the same as we can see if a picture is a picture. A lot of extra work to learn a new system that doesn’t make life easier than before, and bloated files as a result. {Its a long way back – Part 2}

It appears that I am not the only one to have such a reaction. Although the latest versions of WordPress will only offer the Gutenberg editor, there is a plug-in – Classic Editor  – that will reinstate the old editor, and leave Gutenberg as an option.

The Classic Editor plug-in is very popular, and has been installed more than 800 times by various users. It is quite clear that whatever WordPress may think, their devotees have a different opinion! {All is not lost!}

I wonder how many people would have downloaded the Classic Editor by now. 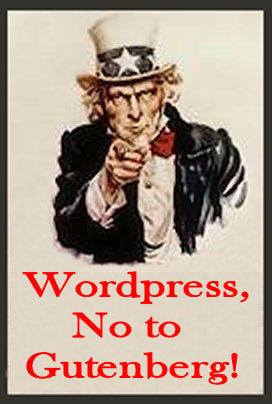 Why has an editor to be made so difficult to use when there is a way much easier to place texts and pictures by non-technical people?!

Like Marilyn Armstrong I could say the same as she does:

I’m retired. I really don’t need something so complicated to write anecdotal stories and the occasional book or movie review.{Marilyn Armstrong in thoughts on “Blogging Insights # 35 – Gutenberg”}

For those who legitimately didn’t know, hadn’t followed or weren’t interested in the development of the Block Editor (AKA Gutenberg) in the WordPress.org open source project, after a little less than 2 years, the Block Editor became the default editor when WordPress 5.0 was released in December 2018. That was a year and a half ago. Anyone downloading or installing the standalone WP software since then uses the Block Editor as the default editor. Those WP users wanting to edit with the Classic Editor need to install a separate “Classic Editor” plugin. As of today, about 5+ million WP sites have installed that plugin.

WordPress is used by 63.5% of all the websites whose content management system we know. This is 37.5% of all websites.

There are an estimated 1.2 billion websites in total*, which, if correct, means WP powers 420,000,000 websites. Of those sites, 78.2% run the aforementioned WP 5.0 and up. That’s 328,440,000 websites. Subtract the approximately 5 million sites that have the Classic Editor plugin installed and you have roughly 323 Million WP sites where the Block Editor is the default editor. So, by the numbers the Classic Editor is in use on a small percentage, around 1.53%, of WP sites running at least WP 5.0.** {The Block Editor-A Fireside Chat}

5 Responses to A Classic Editor versus Block Editor