The Benoth Jerusalem school in Breughelstraat in Antwerp is a subsidized Free Israeli school for secondary education. “Here, too, the final objectives have to be respected”, says Minister Crevits. Photo: Victoriano Moreno

Mid February we heard on the news that at the Free Israelite school for secondary education Benoth Jerusalem girl-school, in the Breughelstraat, Antwerp where the teachers’ corps only consists of women, they demanded very strange rules to be agreed with from their teachers.

The “Guidelines” bundle, which applicants get from the management of the Benoth Jerusalem school in Antwerp, demand of the female teachers not to

This is also specified per subject.

In 2012, the school was screened by the Flemish Education Inspectorate. The school then received a ‘limited favourable advice’. Especially in the field of evolution theory, sexual education and scientific subjects, the inspectors at Benoth Jerusalem found important ‘gaps’. In a follow-up audit in 2015, these gaps were eliminated, the inspection team judged. The school regrets

‘the hoopla that detracts from years of efforts’.

This so systematic direct education is the danger that the Iranian-Belgian human rights activist Darya Safai wants to bring onto more children, especially to the Muslim children. Once again the debacle concerning head-covering was hot topic these weeks. The lady who got very traumatised in Iran probably considers the European women also as weak as the women in her native country. For her it is impossible that children and young women (up to 23) are able to decide for themselves what to wear and to choose if they voluntary want to cover their head or not.

Strangely many see in this lady a human rights fighter, what she really tries to do in her native region. But over here in the West she tries to limit our human rights. She wants to take away the right for parents to decide which religion they give to their children and wants to take the right away for them to choose what their children should wear.

She told, on the Flemish television, parents should have no right to say which religion their kids should follow and expressed also that parents should not have any right to decide which cloths their children have to wear. 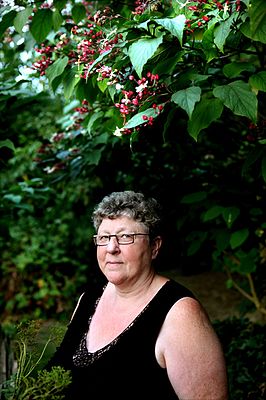 Ex-top woman of Catholic education Mieke Van Hecke (CD&V) pleaded in Terzake for the right to wear a headscarf at school at agreed the head covering was the only element in which she feels that she failed. She notices how children became the victim of the affair. She could see how Sikhs are the ones to suffer as well, because they can not find any state school or Free school where they are welcome with their head covering.

Darya Safai (N-VA) argues that the choice to wear a headscarf is not made by girls themselves.

“It’s not a free choice, if I see six-year-old girls wearing headscarves, I really wonder how they could decide that for themselves-it’s imposed on you and you live with them.”

For her the covering of the body is a symbol of oppression, brought unto the innocent youngsters by their tyrant parents. For her men with beards are all despots for whom we should be very careful because it are very dangerous people. (So every reader knows now that I am considered a very dangerous person.)

“Men do not wear headscarves, that’s the best proof”

To which Vanhecke replies

“With Jews, only the men wear a yarmulke, and that is not seen as a symbol of oppression,”

Van Hecke argues that not only Muslims are victims of the headscarf debate.

“A ban on headgear not only affects Muslims,”

“In Sint-Truiden there were never any problems, the Sikh boys came to school with a turban, because of the ban they no longer have access to our school.”

The primary schools of Flemish Community education have a ban on the wearing of religious symbols which includes the headscarf of the Sikhs. The Sikhs demand that the school regulations be adjusted and rely on a few judgments of the Council of State. If the ban is not scaled back, there are legal proceedings in summary proceedings or at the Council of State.

Van Hecke rightly thinks girls are also oppressed if they are not allowed to wear the headscarf.

“A religion obliges the headscarf, a society forbids it, that is the same principle.”

“You interfere in a fundamental right of parents to make choices for their children,”

says Van Hecke. And with that statement more people should come to see how we find people being used as a play-toy to get right-wing issues through and create opportunities to limit our freedom, like Safai wants to do.

There has been made a lot of work to open borders of Europe, which would not hinder people to get from one place to an other to find a job or to go on holiday. Europe allowing free-movement of workers enhanced many their job-finding potential. Several governments did make an effort to show equality to everybody wanting to live in their region. Though now there are many who want to restrict such liberty of living in Europe. Furthermore they even want to restrict the right of choosing an other religion than their ‘Christendom‘ by which most of them mean ‘Roman Catholicism‘. Those being so afraid others will come to diminish their faith-group seem not to wonder why it could be possible that so many would turn away from Catholicism. If they and the others also would be strong believers then thy should not be worried that they and/or others would be converted to Islam.

33 years old Protestant female covering all of her hair according the Biblical instructions: “For if a woman is not veiled, let her also have her hair cut short; but if it is shameful for a woman to wear her hair cut short or to have her head shaved, then let her be veiled.” 1 Co 11:3‭-‬6 CJB

Many also do forget that in certain Christian groups women also wear a head covering when in public or at church.

The ones who want to restrict what people may wear, bring to themselves also many restrictions and bring our democracy in danger. Safai by excluding youngsters from our schools, when they prefer to wear a head-covering, or when their parents want them to go to a school where their faith is respected, pushes them to private schools where there are many more chances to have in-doctrinal teachings. That where so many are afraid for they are creating themselves by their discrimination.

We should be very careful also to keep the youngsters under control by having them in schools which are under state control.

At the moment throughout Europe there have been taken initiatives to protect the youngsters from those who want to bring them under the spell of fundamentalist Islamist doctrines. Though despite a number of high-quality initiatives, not enough is being done to prevent young people from succumbing to the lure of violent extremism.

In the fight against youth radicalisation, Member States and the EU need to involve civil society organisations more effectively as partners who can make a key contribution to social and values-based resilience against extremist ideas,

the EESC said at its December plenary.

Instead of focusing on short-term, punitive security policies driven by “crisis” events, EU policies should invest more in prompt but also long-term and coordinated prevention efforts, the EESC stated in its opinion on Cooperation with civil society to prevent the radicalisation of young people,.

Rapporteur Christian Moos (Various Interests, DE) stressed that young people are especially vulnerable to extremist propaganda, as they do not have a strong sense of identity and often feel excluded by society.

Prevention requires a multi-agency approach involving policy-makers, police and prisons, social workers, schools, the media, businesses and civil society organisations, according to the EESC. We should be very careful when we do not allow head-covering in the State Schools, which should neutrality and should as such be open for all sorts of people from whatever religion. By excluding those people who want to express their believe, we push them in the hands of people who could have other plans with them than we would like to see. Those people having to look for private schools are then the target of Salafist and extremist groups, who by having them in their schools can guide them in any direction they want, without control of the State.

Mr Moos praised the European Commission’s work in the prevention area. Its Radicalisation Awareness Network (RAN), gathers frontline and grassroots practitioners and brings together practitioners from around Europe working on the prevention of radicalisation. It also promotes the exchange of best practice and on-the-ground experience, while its High Level Expert Group on Radicalisation is to advise on the further development of EU policies and more structured cooperation between stakeholders and between Member States.

The most effective prevention strategies stop people from getting involved in violent extremism or acts of terrorism in the first place, but in case Safai gets her will the youngsters from devout believers become an easy target of the extremist groups luring them in their private institutions where they easily could be indoctrinated. The grip of our teachers, youth workers, civil society representatives, local authorities representatives and healthcare professionals taken away weakens them more.

Nevertheless we must be aware that these initiatives taken by the EESC and local governments are not enough.

The EESC places special emphasis on formal and non-formal education for active participation in a diverse society and for teaching critical thinking and media literacy. Our youngsters do have to learn that there are different religions and cultures with their own specifics. Trying to do away of those outward appearances shall not help to get people used to it. Just the opposite, it shall increase the misunderstanding and take away the rapprochements possibility.

Fighting xenophobic and populist tendencies through more intercultural awareness and also through a firm understanding of EU values is likewise seen as helpful.

Youth organisations were singled out as providing valuable alternative opportunities for developing a healthy sense of personal identity. The EESC also stressed the role of trade unions and religious communities, as well as that of support services and networks that can help schools and families detect the first signs of radicalisation.

By making the parents to look for other schools than the Gemeenschapsonderwijs (GO!) State Schools there shall be less control and less opportunities that those kids shall come to join free community youth organisations like Chiro or Scouts (Scouting) where those youngsters can be supported in their physical, mental and spiritual development. A widely recognized movement characteristic is the Scout uniform, by intent hiding all differences of social standing in a country and making for equality, with neckerchief and campaign hat or comparable headwear.

Combating youth unemployment and poverty should also be high on the agenda, recommended the EESC, but by the actions of Darya Safai many parents shall be obliged to sent their kids to private schools which shall cost them a lot and bring them even on the bring of poverty. But also their kids having gone to such schools with no guarantee of quality education shall have less possibilities on the job-market and make more chance to come on to the dole, their unemployment benefit costing us much more than giving them a good education where all people come to recognise the differences between the many cultures in this country.

It’s Time real lovers of God to Stand and Speak Out!

About the same subject in Dutch: