Complaining and fighting asylum seekers not giving signs of thankfulness

Instead of being thankful for all the service they receive in Belgium disgruntled refugees last week expressed their displeasure about the food they are offered in the asylum centre.

Nearly 12 million Syrians have now been forced from their homes by Syria‘s devastating conflict, four million of whom have fled their country. Syrians given refuge in neighbouring countries are safe from the barrel bombings, chemical attacks, and deadly sieges they faced at home. But with few opportunities to work, most must rely on the international community to meet their most basic needs: a roof over their heads, food on their table, a classroom for their children.
Most asylum seekers are no Syrian war refugees, no parents with children but are Iraqis.

In Belgium last month 47 percent of the 5600 refugees, were Iraqis and especially single men between 25 and 45 years, mostly from Baghdad. Mostly they have enough gadgets to proof they are economical asylum seekers. They rarely or being recognized as a refugee minister Theo Francken wants them all in Iraq to come to know they will not be accepted as asylum seeker.

Belgium has ordered Facebook advertising banners. That will appear on the timeline of that particular group: young men in and around Baghdad will see appearing a message from the government that it has no use to hold the desire to emigrate to Belgium.

Iraqi immigrants are totally something different from Syrian asylum seekers. Normally you would think those Syrians have all the reason to come to the West to try to build up a new and better life.

It is understandable that many try to escape the bad conditions and we can understand it must not have been easy to make the long march to the better world. But what we can not understand is that when coming in Belgium, receiving a roof above their head, having meals presented several times a day, that they complain that the food is not good. It might well be that it are ‘schoolmeals’ or ‘big kitchen meals’ but to be not pleased with that what is offered for free, after the meals had been discussed with them to provide what they want or do not want to eat, is not showing their gratitude. The Red Cross or other groups providing for the meals taking into account the halal rules also do have limited funds to work with.

The Maximilian Park in Brussels, where many refugees prefer to live in a tent camp instead of using the provided dormitories in the World Trade Centre or in the old military bases which proved shelter for the refugees. © photo news.

Theo Francken became frustrated when he saw the law turnout at the provided shelters: I offer basic pre-shelters, 14 go into it. They just not want it. Tent encampment apparently is too snug. Criticism stops here. Excuses welcome. Thanks.

I totally understand the Secretary of State for Asylum, Migration Theo Francken his frustration and reactions. He , being of a targeted party, is constantly under fire by the other political parties. First many asylum seekers not wanting to come to sleep in the presented buildings  and later having those people complaining about too much bread and not enough fruits, vegetables and spices on their plates. They should know that in Belgium bread and grains (wheat, oats, barley, rye, corn, soy) belongs to one of the essential elements of a meal. In several families those grains get varied with quinoa, millet and different sorts of rice and older sorts of grains. Many in Belgium have breakfast with some fuitjuice (orange, grapefruit, pineapple, cherries, a.o.) followed with muesli or cereals (with nuts and dried fruit) followed by bread with jam or with deli (‘charcuterie’: all sorts of meat and/or cheese) eggs (fried, baked or cooked) with or without fried meat, and/or baked tomatoes. About the vegetables it is also usable to have a variety of cooked and raw vegetables on one plate. About the salt and spices the government also tries to make people aware that it is unhealthy to use too much salt or too many additional hot spices. About the fruit we also are accustomed to have (at least) three pieces of fruit each day, but do not have it as the main dish, but as a dessert or in-between. Fruit is also not so cheap. For the warm meals at noon and evening a variety of fish, meat and vegetables (for many Belgians a.o. potatoes) is provided. If the asylum seekers are not happy with the Belgian dishes, they do not have to accept them and may take care for their own food. Now, they do not have to work for it, get every day some money to buy for whatever they want to buy, and still they do complain.

Many Belgians who have worked their whole life and paid for many years their taxes receive even less money per day than the refugees. Though they too have to survive and do not complain what they receive on their plate from the government, because no free meals are given to them at all, and those who receive paid meals from the social services are happy with them. No wonder the Belgians start looking with angry eyes at those refugees who get everything for free and then complain and even dare to be impolite to the wardens and people who try to help them, even dare to attack them. 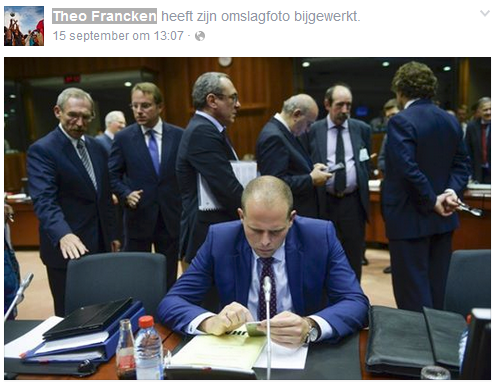 Last week and this week, we have seen already more than one attack on police and press, like the one in the city of Suhl, Germany, where 18 people were injured and had to be hospitalized, including six police officers. It happened in a large overcrowded reception centre, after an asylum seeker from Afghanistan had allegedly torn a Koran to pieces and thrown parts of it into a toilet. Having seen that 20 men chased the Afghan man, but he was rescued by local security personnel. But that just made the Syrian men even more furious and they began to attack the security personnel. When police showed up and took the Afghan man away the attackers became even more aggressive. The furious mob started to attack the police and the attending journalists. The Syrian men, armed with iron rods, bricks and concrete blocks, then went completely berserk. They smashed doors, windows, police cars chased the journalists and tossed about with furniture and other things.

The rage was particularly aimed against the asylum centre where they live, as they broke into the centre’s office and smashed everything. …

Such aggregative people damaging the goods of our society should come to know that such attitude is not tolerable in our society and if they do not want to accept our living rules they better go to other states where such a way of life is considered to be normal and acceptable.

Naturally you could say problems arise when you get centres which are not foreseen to lodge so many people. The centre where the furious asylum seekers live, is built to accommodate 1,200 people but currently houses up to 1,700 asylum seekers. The German authorities have difficulty keeping up with the increasing amount of refugees, and in many places there are made alternatives such as tents and schools providing asylum seekers shelter.

You also could say the authorities have to try to divide asylum seekers by ethnicity, in order to prevent a recurrence of the violent riots, but in our regions people do have to live together with different ethnics, religious groups and different political groups. In case people can not live together with people who think and feel differently, it is not the right place for them to reside here.

Asylum seekers attacked the authorities because they could not get hold of the Afghan man who allegedly had desecrated the Koran. One must say it is extremely worrying that they do not seem to have respect for the authorities.

It is scary to think what would have happened with the Afghan man if the furious Syrians had got hold of him.

Many of those asylum seekers better should start counting their blessings and know that in our regions we also have people who have to look for their food in the trash bins.

Those having come to Belgium, Germany, Sweden and Holland should know those countries are offering their hospitality. Lots of Europeans are wiling to welcome them and to help them, but in return they do hope they will respect our way of life and our values and would not impose their way of life and their values onto our society.

The regions which are stretching out their helpful arms are hoping other European nations should share responsibility for the refugees reaching Europe and that several of the refugees once the war is over will return to their home country. though they have no deaf-man’s ears for the Australian defence minister who had earlier said his country’s airstrikes in the Middle East could last up to three years.

Canberra had already been carrying out airstrikes as part of the US-led alliance against Daesh in Iraq. Since September 2014, the US along with some of its regional allies has been conducting air-strikes against purported positions of Daesh inside Syria without any authorization from Damascus or a UN mandate. The airstrikes in Syria are an extension of the US-led aerial campaign against similar positions in Iraq, which started in August 2014. This is while many of the countries joining the so-called anti-terror coalition, such as Turkey, Saudi Arabia and Qatar, have been staunch supporters of the extremist elements fighting against the Syrian government.

We also are aware that it well can be that Salafists are trying to talk with unaccompanied youths who have come to our regions without their families and who are in particular need of support and connections, like a spokesperson from the Bavarian internal security service (LfV) told Süddeutsche Zeitung about the refugees in Germany.

On Friday, the Danish Security and Intelligence Service (PET) has also warned that some of the refugees arriving in Denmark may hold extremist views, noting that the latest influx of asylum seekers could even provoke violence.

“PET is aware that among the refugees from Syria/Iraq could be individuals who sympathize with militant Islam and could act on the calls of militant Islamic propaganda to carry out attacks against counties participating in the international coalition against IS, including Denmark,”

PET said the refugees could also become the target of attacks, however.

“In our neighboring countries, we have seen examples of attacks and threats of violence against refugees, immigrants or institutions related to them, committed by people opposed to the current influx of refugees. PET is aware that such a development could also occur among people with politically extreme views in Denmark,”

the agency wrapped up.

All West European countries should really screen the asylum seekers very well and speed the deportations of false and dangerous immigrants and punish those with false claims and phony paperwork. In addition, asylum seekers deemed to be withholding vital information — such as their passports or proof of their country of origin — should be denied benefits. Those who do not want to be open about themselves may have to hide something and could be a risk for our society.