The citizens of Great Britain were warned that the Brexit vote could cause significant problems for the British industry and for the British economy. For the member countries if the other 27 members do not draw a firm line and demand the leave to happen soon the current instability in the eurozone will continue and create lots of problems for the European Union as well.

We lost already lots of money with the Lehman implosion, and I would warn people not to be so stupid like me, to hope the bank crisis would go away and leave their shares untouched. I lost most of my retirement money by having waited and having thought we could avoid a crisis like the one of the 1920-30ies. We have to have learned from our waiting positions and should act directly and unemotionally.

In 2008, big banks went up in a puff of smoke when market first movers didn’t trust their liquidity, and those who looked at it and could not believe it that such big players could loose, lost most of their money. Some may be confident that in 2016 GSIBs, especially those in the U.S. and U.K, can circulate the market’s lifeblood of intraday and overnight funding.

Mr. Obama, in a written statement released early Friday morning, sought to calm rattled financial markets and blunt any economic anxiety by saying the “special relationship” between the U.S. and U.K. is “enduring” and stressing the importance of the EU for stability and the global economy.

“The people of the United Kingdom have spoken, and we respect their decision,”

“The United Kingdom and the European Union will remain indispensable partners of the United States even as they begin negotiating their ongoing relationship to ensure continued stability, security, and prosperity for Europe, Great Britain and Northern Ireland, and the world.” 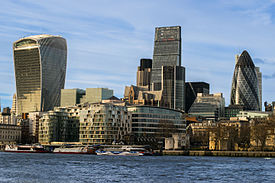 The eastern part of the City of London, seen from the south bank of the Thames in February 2016

The European continent also needs Great Britain, but it must know that it shall not have such a good position to debate as when it was in the EU. The continent shall not have any obligations any more, the same as it did before. Many companies will have less reason to invest in Great Britain and shall prefer to have their EU base in Frankfurt or an other German town instead of the City of London. Several companies told the press already that they plan to open up new offices in Europe rather than focusing on the U.K.. Several businesses cancelled hiring in preference to move overseas, and have their investments terminated and expansions shelved.

U.K. spending on consulting rose 8% to $14 billion in 2015, the largest and fastest-growing market in Europe, according to Source Global Research. That shows how the markets were afraid but also wanted to be prepared for a Brexit.

In the oil sector traders had not taken large positions ahead of the vote due to uncertainty, but the outcome still came as a surprise. Some warned that prices could fall further as investors who had long positions, or bets on higher oil prices, close out their wagers.

Will Riley, co-portfolio manager at Guinness Atkinson Asset Management Inc., which oversees about $300 million in energy-equity investments, is convinced that the referendum result could weaken global oil demand by weighing on European economic growth. But Europe isn’t the main driver for oil demand, he said, and Guinness Atkinson still expects international oil consumption to rise strongly this year.

Britain’s post-Brexit referendum rollercoaster continued full pelt on Monday, as the pound hit a new 30-year low, bank stocks crashed, and the opposition Labour party carried on tearing itself to pieces. The pound’s decline continued during yesterday’s trading, falling below the $1.32 mark, before hitting a new 30-year low of $1.3118 in mid-afternoon. It was sterling’s biggest two-day drop since the era of free-floating currencies began in 1971. Hedge funds bet heavily against the currency. As expected we could see a mirror image of 2008 also for the global stock markets which also rocked, with bank stocks suffering particularly.

To add insult to injury, S&P lowered the UK’s credit rating to AA, describing the referendum as a

“seminal event [that] will lead to a less predictable, stable, and effective policy framework in the U.K.”

Having addressed parliament yesterday on his plans for handling the immediate next steps, David Cameron will face other EU leaders at a summit tonight in Brussels. His authority shattered at home, and with little remaining goodwill to draw on abroad, Cameron is set to find it a deeply awkward occasion.

What we see happening in Great Britain could lead to a sudden recession — especially if politicians don’t act fast to lay out a convincing plan for extricating the U.K. from the EU without major disruption. Almost three-quarters of economists consulted in a Bloomberg survey this week said they think the country is headed for its first recession since 2009.

Leaving the EU puts into question some of the fundamental underpinnings of the U.K. economy, which has been part of what’s now the 28-member bloc for more than 40 years.

Also for the ecological, warfare and (outer-)space actions the now 28 members hall have to find solutions. For example, what about the costs for the space program concerning the avoidance of the meteorite coming down on earth in 2022. Yesterday having taking place the talks to have the satellite at last going into space in 2020 to redirect the meteor. Would Great Britain not contribute to the ESA project any more but receive the advantages of it?

For NATO the Brexit should not be a problem, because as a country on itself it still can stay a strong member. (I think.)

The “Father of Europe” (Pater Europae) Charles the Great (or Charlemagne), King of the Franks, shall not turn himself in his grave, but the members of the EU better look at his work and why his grand project failed. Represented as the sponsor or even creator of medieval education, and the Carolingian renaissance he was able to create a big Europe offering it a renewal of Western culture. Whether by persuasion or under compulsion he got the things done and got advancement for most of the citizens.

If the 27 EU members do not act swiftly and demand fast action from Great Britain they may bring the Union itself in danger of disintegrating.