From a land 90 times Belgium: Kazakhstan #3 Kazakhstan in the grip of a dictator

In 2011 the Republic of Kazakhstan faced her first serious demonstration for higher wages, bringing the country into a crisis. Kicked off in the oil production centre of Zhanaozen in western Kazakhstan, the regime responded with deadly force and 14 people died.

Nazarbayev asked Tony Blair for help and flashed out a cool £13 million for his advice. He advised Nazarbayev to roll with the challenge, stress that reforms would be gradual, would “take time,” and meanwhile polish the country’s international image.

The 2008 financial crisis hit hard. With its newly liberalised economy integrated into the global capitalist economy, Kazakhstan was not well prepared for the shock. The land had a lot of difficulties to recover that crisis.

An other crisis came with Covid-19. Wage support for people on minimum incomes is slashed and people are facing a second pandemic winter, whilst they are having to cope with energy prices gone up above their budget.

Witnesses in Almaty, the largest city of the Republic of Kazakhstan, described scenes of chaos on Thursday and Friday, about governmental troops targetting the Kazakh people. Many of those demonstrating said the protests had begun peacefully earlier in the week, and turned violent after a heavy-handed government response. Almaty became the central flashpoint during the national protests.

City officials in Almaty said 748 officers from police and the national guard had been injured and 18 killed, one of whom they claimed had been found beheaded. We should question how it came so far. In the previous weeks, we could see governmental troops shooting with real bullets at people who were demonstrating in a decent or normal manner. Not surprisingly, when being shot at, that people became not only agitated but charged against those troops.

We could hear the president saying those protesters were stimulated by foreign forces and were joined by foreigners, who would do everything to destabilise the country. Therefore he called the police and army to detain every protestor and even shoot at them. This call of President Nursultan Nazarbayev ordering security forces to “shoot-to-kill” protesters made the people even angrier. But Kazakhstan’s President Kassym-Jomart Tokayev has described the deadly violence last week as an attempt to take over control of the country.

The interior ministry said 2.298 people had been arrested during the unrest, while the police spokesperson Saltanat Azirbek told the state news channel Khabar-24 that

“dozens of attackers were liquidated”.

There were also reports of about 400 people in hospital.

A local journalist, Ardak Bukeeva, who spent Thursday speaking with protesters in central Almaty, said demonstrators who stormed the presidential residence in the city told her dozens of people had been killed during the assault. On television broadcasts, we could see the police firing on the demonstrators, as well as beating down people with their rifle butts.

Earlier people had decided to come out to give a voice at their frustrations, having seen that their president promised a lot of things but nothing became true. The political and economic situation in the country became the seed of their frustration. The demonstrations, triggered by a rise in fuel prices, turned into the worst unrest the country has seen in its 30 years of independence. Also noticing how members of the government were deprived of their posts, was undermining the people’s faith in this autocratic government.

On Wednesday, the situation became very heated because some people took advantage to vandalise and to loot. It turned violent, with some claiming provocateurs had arrived to deliberately cause trouble, and others noting that police were almost entirely absent from the city centre.

Russian President Vladimir Putin, who was asked to send help, said Kazakhstan had been targeted by international terrorism, but provided no evidence for this claim, the same as Tokayev can give no proof of such thing. Thousands of troops went to help to put down civil unrest.

Today we hear that already 8.000 people are arrested and a hundred killed. The presidents of Kazakhstan and Russia say the Russian troops will stay in the country as long as they are needed. President Kassym-Jomart Tokayev has vowed to destroy “armed bandits” and gave “special thanks” to Russian President Vladimir Putin for sending troops to quell the unrest.

Russian military vehicles wait to be loaded onto planes bound for Kazakhstan at an airfield in Russia, Friday, January 7, 2022

“for as long as the president of Kazakhstan believes it necessary”.

He said they would mainly be engaged in protecting “infrastructure”.

Naturally, we can not agree with the vandalism and looting that took place. As we see also in other countries, there are always people who misuse original rightly set up protests, to do criminal acts. For sure, such criminal acts should be penalised, but not by killing people.

Though, the people in charge of the country should consider why so many people came onto the streets and why there were also so many who started looting and putting fires at shops. Originally, on Tuesday last week the crowds were

“friendly and smiling, without aggression and with lots of hope”.

said Valeria Ibraeva, an art historian who watched the protests from her window overlooking one of Almaty’s main thoroughfares.

By Wednesday, however, there were attempts to overturn a bus on the street, and widespread looting of shops, she said. 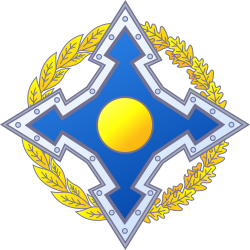 Late on Wednesday Tokayev appealed for intervention from the Collective Security Treaty Organization (CSTO) – an alliance made up of Russia, Armenia, Belarus, Kazakhstan, Kyrgyzstan and Tajikistan. Kazakhstan is part of an economic union with Russia and the two countries share a long border. The request was approved and Russian paratroopers arrived in Kazakhstan on Thursday. The decision to intervene came just hours after Vladimir Putin’s spokesperson said there should be no foreign interference in Kazakhstan.
Tokayev had appealed to the bloc for help, decrying the actions of “terrorists” and alleging the country had been the victim of “attacks” by foreign-trained gangs after fuel price rises triggered widespread protests.

The Kazakh events come at a time when all eyes have been on a possible Russian intervention in Ukraine. Images of police being overpowered by protesters are likely to cause alarm in Moscow, as another country neighbouring Russia succumbs to political unrest.

State television reported on Thursday that the National Bank of Kazakhstan had suspended all financial institutions. The internet in the country is mostly down as well as mobile phone reception. That way messages from civilians can not get out the country.

Radio Azattyq, the Kazakh service of Radio Liberty, reported unrest in cities across the country. In the western part of Kazakhstan, protesters had got together in Aktobe to defend the airport and railway station, insisting they did not want violence and demanding negotiations with authorities. In other cities there were burned-out cars, a shutdown in public infrastructure and panic as people could not withdraw money from banks and found their cards did not work after the banking system closed down.

For years, Nursultan Nazarbayev has been used to performative adoration from the citizens of Kazakhstan, but on Wednesday, protesters pulled down a monument to him.
Instead of chanting “Elbasy”, many angry Kazakh protesters do not want to know any more of this ‘Golden Man’ who got many statues for him, are now chanting “Shal ket” – or “Old man, out!”

China finds it best that the president of Kazakhstan uses a hard hand. It opposes

“any forces that undermine the peaceful life of the Kazakh people, and resolutely oppose external forces deliberately creating turmoil and instigating a “color revolution” “

If necessary Xi Jinping as a trusted friend and reliable partner, promises also to provide the necessary support to Kazakhstan to help it tide over difficulties.

From a land 90 times Belgium: Kazakhstan #2 Natural wealth attractive to Russia as well as Europe 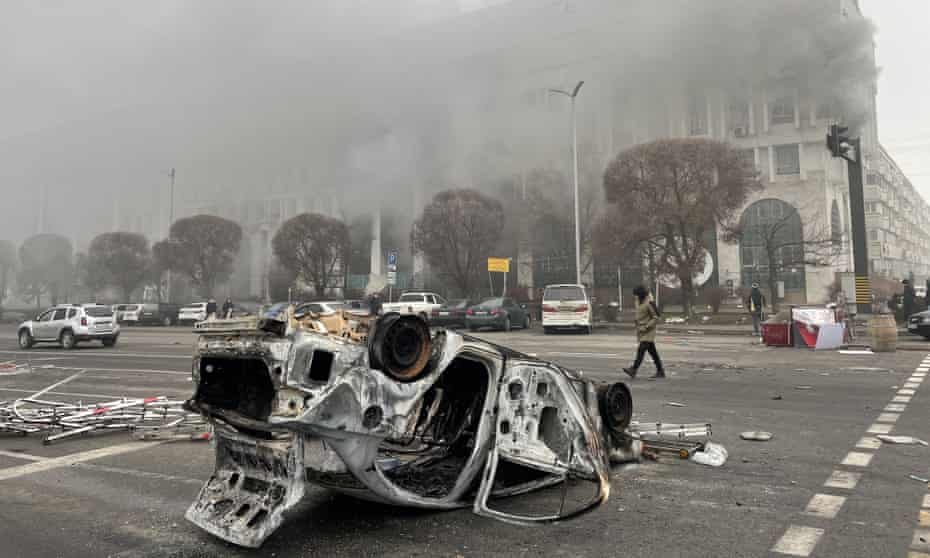 7 Responses to From a land 90 times Belgium: Kazakhstan #3 Kazakhstan in the grip of a dictator