In denial, Donald Trump continues to insist that nothing serious is at hand and everything is in control

Americans are increasingly worried they or a loved one will be infected with coronavirus, whilst their President says nobody should fear.

Donald Trump in his habitual way keeps continuing to insist that his country is the best and safest country of all the world where the “Chinese disease” shall not be able to hit, neither to kill many Americans.

At the moment when the worldwide death toll climbed to more than 24,000 the 45th president of the U.S.A. asks his citizens not to be afraid of that Chinese disease that has also hit Europe but shall not master America. He insists that America shall not follow Europe in having those “ridiculous measures” of social distancing and wants them back to work at the very moment that the U.S. tops the world in the number of coronavirus infections.

He does not seem to have a clear eye on what happened the previous months in Asia and why China and Singapore, are now having to close their borders because after the CoViD-19 pandemic seemed under control, they are seeing new cases related to people coming in from outside.

On the world front, meanwhile, India has locked down its entire country and, in an example to the world, has launched the biggest feeding program ever embarked upon. Millions are being fed through a massive and unprecedented government-run food distribution program.

He also seems to forget that in Spain, Italy, France and Belgium it are not just the elderly being infected or dying from it. Young people, in addition to the older people, are vulnerable to the virus too and should come to see and understand the seriousness of the measures taken by our EU governments. There is an AP report that in France, a 16-year-old student became the youngest person in the country to die from the virus. Her sister said she was admitted to hospital on Monday after developing a “slight cough” last week, and she died on Tuesday in Paris.

No one is invincible against this mutant virus. In Belgium yesterday the first cat discovered to be infected by the virus (from her owner) recovered after nine days of illness.

In France, some 29,000 are infected with more than 1,600 dead. Death rates are hard to determine in part because of inadequate testing, but they seem to range between 1% and 8%, depending upon the country filing the reports.

The American leader may think high placed persons are untouchable, but should know that Prince Charles and Boris Johnson, the Prime Minister of the U.K., also have tested positive for the coronavirus, making that last one the third world leader now leading their countries from quarantine. The others are Canadian Prime Minister Justin Trudeau and German Chancellor Angela Merkel, both of whom are in voluntary quarantine because they have been in contact with infected people, not because they are confirmed positive.

“unaffected areas of the country”

that can loosen social distancing policies. The problem with that approach, health officials say almost unanimously, is that there is woefully inadequate testing to be able to identify or classify counties that way. And even when there is, no plan exists for how county to county traffic could or would be controlled.

Health officials warned yesterday that within the U.S. there are disturbing signs that the horror unfolding in New York is about to be visited upon Chicago, Detroit, and other cities and counties. Strangely enough, there is an American coronavirus task force to chich Mr. Trump has no ears. Dr. Deborah Birx, coordinator of the president’s coronavirus task force, talked about the danger to Detroit and Chicago and surrounding counties at yesterday’s briefing by the task force.

According to news coming from the U.S.A. it seems that New Orleans, which has been totally ignored at those task force briefings, is now experiencing the fastest spread of the virus anywhere in the world.

Meanwhile, echoing Trump’s inaction, is the governor of Mississippi, which is right next door to hard-hit Louisiana. The Mississippi governor has said,

“Mississippi is not China”

and has actually overturned stay-at-home orders in individual cities and towns in his state.

In the European Union all church services take not place any more in gatherings in church, but most churches have them by internet meetings. In the States lots of churches are still open and have their members socialising. In the small Arkansas town of Greers Ferry, 34 people who attended a children’s event at an Assembly of God church contracted the virus, with one of those already dead.

In Europe the governments are taking economic measures to avoid another disaster, bringing the countries down. The latest reports on how the virus is tightening its hold on the planet as a whole came as the House gets ready today to approve a $2.2 trillion dollar emergency aid bill.

As the House got ready for that vote, reports coming from around the world show that the number of infections is skyrocketing, including in countries from which we have not gotten much information until now. Russia, Indonesia, and South Africa are now reporting more than 1,000 infections each. The South African government has locked down the entire country.

Particularly worrisome in this regard are remarks yesterday by Dr. Anthony Fauci, the leading health expert on the U.S. response team. He noted that southern hemisphere countries where there have been less infections are now approaching their winter season and are seeing a surge in cases. The implication is that even if the virus is brought under control in the U.S. in the summer, it could come back with a vengeance next fall and winter. This makes the struggle to develop a vaccine even more important, Fauci said.

It all goes to show there is much to learn about this virus and the last person who is likely to have figured everything out is Donald Trump.

We in Europe see press conferences where the president tells there is no shortage and the country is coping with everything, whilst pictures from reporters in the different states show us the difficulties the doctors have to cope with, without having enough protection material.

Doctors are already reporting they have to deny access to ventilators to very sick patients in order to try to save those who are less sick. Doctors note that sharing of a ventilator by two patients, which the president has also suggested, can increase the possibility of death for both patients.

The U.S. reported today more than 85,000 infections, at least 3,000 more than in China. The U.S., Italy, and China account for almost half the world’s infections.

Health experts have warned that all the official figures are probably very low. Belgian virologists even say those cyphers might be multiplied by 10. Also Dr. Ezekiel Emanuel, a top health advisor to the Obama administration, has said that the figures likely represent only one-tenth of those actually infected ten days ago. That figure, he said, has as much as doubled every few days since then. The best experts can do is guess about the real figures in the U.S. because of the inadequate testing.

In Spain, the official number of cases increased by 7,800 today to a total of 64,059. There were a total of 4,858 deaths, 769 more than yesterday. Spain is second behind Italy in Europe and fourth in the world in the number of infections. 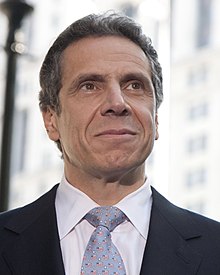 Andrew Mark Cuomo, lawyer serving as the 56th governor of New York since 2011.

There were 100 deaths in one day in New York state, the epicentre of the outbreak in the U.S. Gov. Andrew Mark Cuomo said the number of deaths will continue to increase as critically ill patients succumb.

Cuomo said schools in his state will remain closed until at least April 15. When he first shut them, it was until April 1.

He says the apex of need in hospital capacity may be highest in 21 days, when they will need 140,000 beds. They now have only 40,000. Hospitals have been ordered to increase capacity by at least 50%. Four Federal Emergency Management Agency (FEMA) hospitals are under construction now, and Cuomo is asking Trump for four additional FEMA hospitals. The Army Corps of Engineers says all the proposed sites are feasible. All they need now is the green light from a president in denial.

“They die alone, in isolation,”

she said on the phone.

“They can’t have a relative or a loved one in with them, comforting them. And I cry and their loved ones cry when we have to tell them over the phone what happened.”

At the Flemish television, we also got to see a doctor who said they could not keep it under control and had to see patients dying in the corridor or even before they got from the entrance to a sick-bay. The pictures we got to see from Elmhurst Hospital in Queens, New York, where not what we would ever think possible in a developed country. Nurses also complained and could not understand that in such high-ranked wealthy country could be so many health problems and people having not survival chances because of their unprotected financial status. A large refrigerated semi-truck sits outside this hospital in Queens, because there is not enough room in the hospital morgue for the bodies of those who have succumbed to the virus.

Washington, D.C., reports 267 people infected and has been placed under a state of emergency.

In China, which had last week been reporting almost no new cases, there are now reports of 55 new ones, explaining the decision to close up borders. China is barring most foreigners from coming into the country.

“understands the United States’ current predicament over the COVID-19 outbreak and stands ready to provide support within its capacity.”

President Trump shall have to recognise that Immigrant Workers Are Vital to the U.S.A.

Making deeper cuts than some terrorist attacks of the near past

17 Responses to In denial, Donald Trump continues to insist that nothing serious is at hand and everything is in control