Only a few hours are left for American citizens to decide if they are going to remain loyal to a political party or opt for the security of their own nation and the world.

In 1896 the Republican Party (GOP) became dominant until 1932. In 1964 the United States of America could again find themselves a critical election with a shift at the presidential level to the Republican (GOP) presidential candidates. However, there was a gradual shift toward the GOP at the state and local levels, as Aldrich (2000) and others have found. Democratic voting remained strong into the 1970s and only slowly shifted towards the GOP as state Republican organizations systematically broadened their base in the 1980s and 1990s.

Some actor could get the people also at his political hand. The majority voted Donald Reagan to be the 40th president of their nation from 1980 onwards, though or perhaps because for his conservative Republicanism, his fervent anticommunism, and his appealing personal style, characterized by a jaunty affability and folksy charm.

It must be said that was a man of words and his remarkable skill as an orator earned him the title “the Great Communicator.”  His party member with the big words or big mouth for this presidential election has not such refined vocabulary neither refined manners.

In the 1960ies the Americans and Europeans could already not that more and more money came into the play. those who wanted to get through presidential primaries had to have enough financial backing. Today it has been made clear those who have not enough financial resources do not have any chance at all.

After 1968 the extensive use of political advertising on television became something the ordinary American seemed to find normal. The high cost of presidential campaigns and the consequent increase in the influence of special interest groups made the system more corrupt, whilst the majority of the American population did not notice how they where lured into the trap of commercialism and public indoctrination by the media. 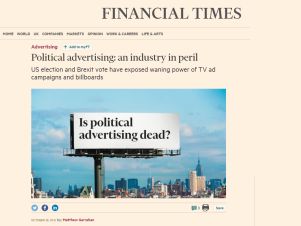 From the 1960ies time spend on fund-raising increased, but with the present primaries we could see and hear that setting up a big mouth and telling as much private matters and lies about the opponents as possible would bring most nominations. The 2012 election became the most expensive in history at an estimated cost of $6 billion (presidential and congressional elections combined). This election shall probably a much higher figure.

The man of words who became president in 1980 had promised to do things and had not told so many lies nor did not find it necessary to throw with mud all the time not giving any decent answers to the problems to be solved.

Reagan from the beginning made it clear he would not work together with the Soviet Union and other communist or dictatorial countries, actively seeking a rollback or collapse of the USSR as well as an end to the Cold War. This time his republican party presents a candidate who loves dictatorship and already gave enough signs what he would do to get all those who stand in his way, out of the way. The republican candidate beginning 21st century does not mind at all to work with the Russian and Turkish dictators and finds that Europe had to be already a long time (since last year) the battlefield for a world in which America would be glad to provide the weapons.

The sale of such weapons has to increase and is part of making the States bigger and stronger, having more fighting countries dependent on the weapon deliveries.

Supporters of Trump point and scream at an anti-Trump demonstrator holding a sign during a Trump campaign rally in Fountain Hills, Arizona. [Reuters]

Though Donald Trump did not proof to know much about history and geography, the world should know that he is not the first authoritarian demagogue who could take power and undermine constitutional government in the US or Europe. Right-wing authoritarian populists have often grabbed power during economic crises, particularly in Western societies suffering national decline and severe racial divisions or culture wars.

In the bad economic situation of his country and in the fear of many for the refugees the man with the big mouth and the big purse, knows how to get people to believe in what he promises going to do for making the county big. He has not a particular ‘moustache’ but his attitude, body language and way of shouting, creating lots of  non-saying winds, stoking fire, for getting him into power, is something more people should be aware off and fear for.

When Reagan spoke of his great America, he meant one for all American citizens

“men and women of all races, nationalities and faiths bringing home to their families a decent paycheck.”

Concerning the way of financial compensation Trump already proved with his imperium how he made money on the slavery of others. He sometimes in the debates said Americans  should give work to Americans, though he himself hired lots of Chinese and brought in material from China, though it could all come from the states itself.

Ronald Wilson Reagan, American politician and actor, 40th President of the United States, from 1981 to 1989.

For those who did not have opportunities to go to college Reagan promised a solution and got arrangements when he was a president to have more people having the opportunity to study where they wanted. This time those with no money would not have to hope for changes to go to a high school, because the State should not fund such ‘idiots’ (dixit Trump)? For those without opportunities this time they should know it is their own fault and others should not pay for them.

Reagan his convention was full of optimism and specific plans to cut taxes, deregulate energy and enhance the military. The republican convention in Cleveland showed a total different republican party, with no place at all for people who could not proof they are real Caucasian in-breath Americans. Now Trump has allowed some coloured people around him and some Hispanic because he cleverly knows very well he needs them to get in, but can dump them straight after he is elected to president.

Those Americans who sincerely believe that the name calling from the beginning of the primaries is all gone and past show, shall be very surprised as the real Trump turns up again after they gave him their vote. The same what happened in Germany in the 1930ies could now repeat itself in the New World, if the American citizens are not careful.

At many occasions Donald Trump showed his disgust for people who come from other countries and for those who have not the same skin colour as him and do not have the same faith as the majority of Americans. On more than one occasion we heard Trump calling brown or black-coloured people not ‘niggers’ but “monkeys”.

According to Trump Jews, Muslims, Hispanics are the cause of the United States of America “going to hell” (his words). For him it is clear America has to do away with them and

“liberate our citizens from the crime and terrorism and lawlessness that threatens their communities.”

Trump all the time tried to take away the focus away from his own personality and his own background, shooting with enough dynamite, to have those coming to his speeches to cry out to get away with Hilary Clinton, who seemed to have done the worst of crimes. He also tapped into everything that the Americans dislike about the last eight years of presidency under Barack Obama in the “corrupt system”. Himself forgetting to be part of that corrupt system and having created enough opportunities to make himself rich in not always kosher manners, but knowing himself that is perhaps the only way to become so rich as he.

Today we can see that the one man who managed to build up a huge “money fort”, created not only his own brand, both in business and politics, he also managed to pull the wool over most American’s their eyes.

Republicans claim to revere Reagan, yet their 2016 nominee fails to honour his ideals and made brushwood of many of the other republican candidates, also bringing a program (if you can call it that) which goes far away from the lines of the republican party Europe and the rest of the world knows.

For a quarter-century Hilary Clinton has been the GOP‘s go-to gal for outrage. Though today many republican should come to consider if they are going to honour their republican party and vote for this bugaboo or shall better choose from the “two bad people” the least bad one. They should sincerely come to think either to save the country or to save the position of that nominee, of which they better wonder if they can agree with all he says.

The danger is that the man with his big mouth and so many lies, like the English politician Nigel Farage who got the Brits in the Brexit debacle, can have enough people on his hands to become the next president. We have seen the many caustic attacks from republicans to the democratic candidate. But they should open their eyes and get to see what this smart woman really has already accomplished on international political level and how diplomatic she always has been, even in the most difficult situations.

It is a pity she did not united with the very promising Bernie Sanders. It is good she begun to integrate some of Sanders’ demands about free college education, more expansive funding of social needs, confronting institutionalized racism and mass incarceration, stronger anti-fracking and higher solar and wind production, a higher minimum wage, and reversing Citizens United.

We can only hope Sanders’ supporters have come out of the cold shower and shall be willing to support their other Democratic candidate. All should see that the democratic system is in danger when Trump would become the leader of the United States. His right-wing populism and the power of the weapons-lobby also can create a real political revolution and can bring the country in more troublesome times than now.

Though the racialised and nativist hostility he has exploited will not evaporate with Trump’s defeat, it would be immeasurably amplified if he wins.

Either way, the enduring damage to the country’s international standing and founding ideals is already incalculable.

We in Europe do know that Trump is no fool but a very ‘handy’ man cunning as a fox. We also know that lots of the things he promised he shall never go to fulfil. But he made it clear that he would abandon America’s obligations to their North Atlantic Treaty Organization (NATO) allies, and for sure we in Europe shall have to face it. But we in Europe shall have nothing any more to say about human rights of which the nation under his presidency shall not be bothered, because all means shall be good to get ‘the bad boys’ out of the way.  International treaties such as the Geneva Convention also then shall be something for the bin and America shall not having to fear to take into account the way nature is going.

Let us hope there are more people, than Trump thinks, living in the United states that can use their brains properly and can use the balance mechanism to bring out a vote to give America a worthy trustable position.