From the New World came the most amount of fancy stories in the year 2019. One can wonder how many people In the U.S.A. really believed all the nonsense or false stories Donald Trump produced from his mouth and from his department. 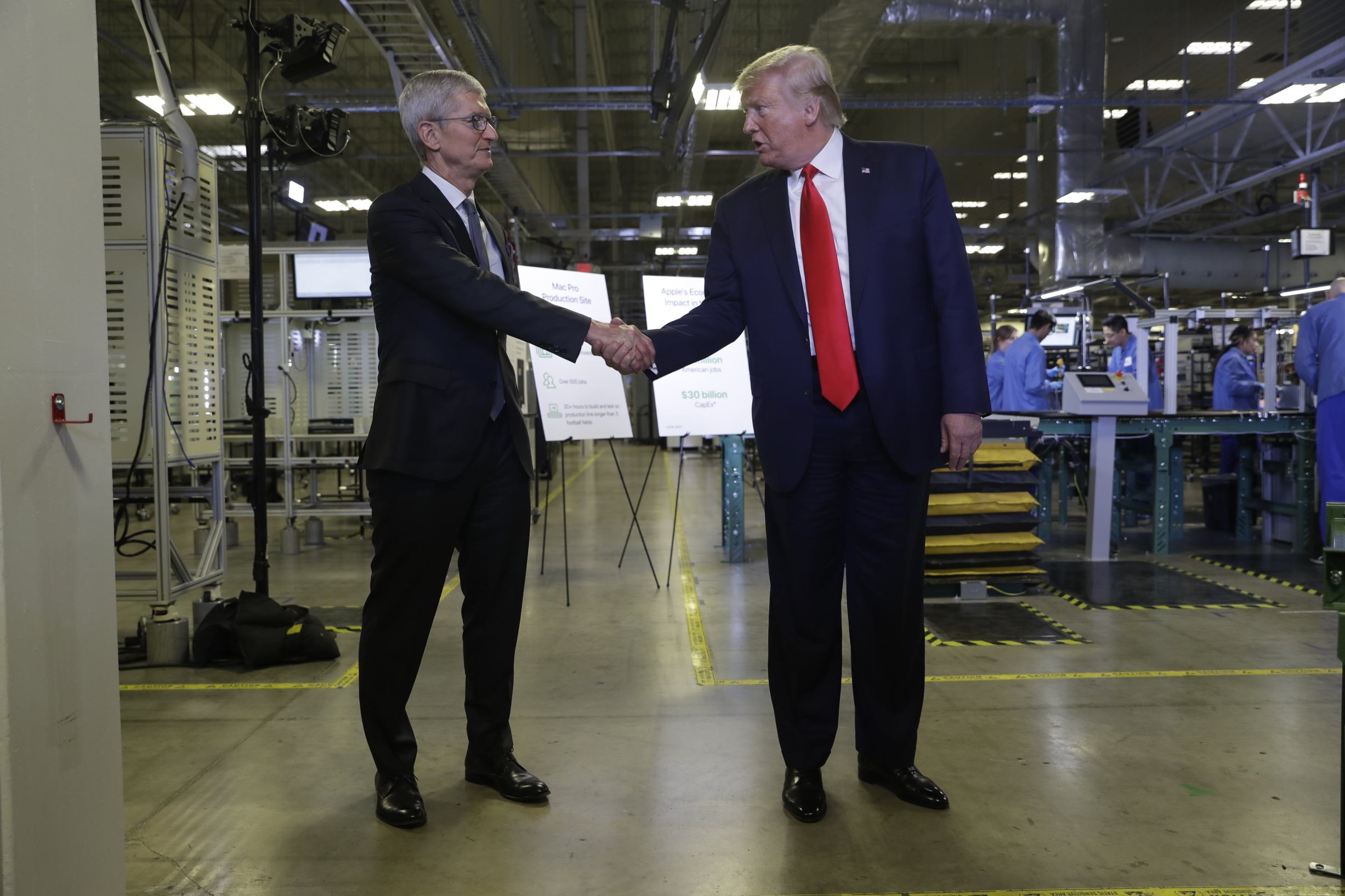 ” that will bring high paying jobs back to America.”

In reality, the plant he toured has been manufacturing Apple’s Mac Pro computers for nearly six years. The tech giant considered shifting operations to China earlier this year but decided to stay put after receiving federal tariff exemptions.

The current president of the U.S.A. want the people to believe it was never so good in America. According to him never before were so many jobs created. In Belgium and some other countries we also can find other right wing populist politicians who want to have their nation to believe they’ve created the most jobs since years. In several of those countries many of those jobs are flexi-jobs or work for just a few hours, for which the employer does not have to pay so much tax, but gets the worker to find more jobs to be able to have a reasonable income to survive. such created jobs increased poverty and as such are a poison for the community.

In a Facebook ad that started running Nov. 14, the day after the first public hearing of the impeachment inquiry, President Donald Trump declared:

“Nancy Pelosi, Adam Schiff, and the rest of the corrupt Democrats made a promise to their crazy left-wing base that they would impeach me even BEFORE I took office.”

You can imagine how many journalists wanted to unruffle such a story. Several researchers, detectives and newspapers could find no evidence of the two California House members — Speaker Pelosi and impeachment inquiry leader Schiff — and other Democrats pledge to impeach Trump even before his inauguration on Jan. 20, 2017. 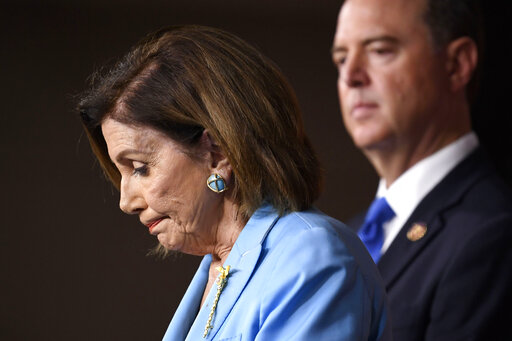 PolitiFact writes about the matter

In December 2016, five Democratic senators, including 2020 presidential candidate Elizabeth Warren, announced they would introduce a bill to require Trump to divest assets that could pose a conflict of interest in his role as president. They said the legislation would symbolically make violations of federal conflict-of-interest rules “a high crime or misdemeanor under the impeachment clause of the U.S. Constitution.”

But those are only examples of Democrats raising the possibility of impeachment — far short of promising to do it. And Pelosi and Schiff were not involved. {No evidence for Trump’s claim that Pelosi, Schiff promised to impeach him before he took office}

Disinformation has been the key-word and winning act for 2019.

for example was one of the many advertisements sent into the American households living room by their little  or big television screen. Several times the ad narrator went on to attack Democrats for impeachment inquiry proceedings as well as Special Counsel Robert Mueller’s investigation into Russian interference in the 2016 election.

Donald Trump and other right wing politicians invested a lot in advertising and giving false information on social media. On such popular media, like Facebook and Twitter, people share millions of photos and videos every day. Facebook and Instagram got most photographs published and shared. Facebook admits that it is creating some of the most compelling and creative visuals on its platform, it receives also content that is manipulated, often for benign reasons, like making a video sharper or audio more clear. But there are people who engage in media manipulation in order to mislead.

Manipulations can be made through simple technology like Photoshop or through sophisticated tools that use artificial intelligence or “deep learning” techniques to create videos that distort reality – usually called “deepfakes.” While these videos are still rare on the internet, they present a significant challenge for the internet industry and society as their use increases.

The last few years there was so much fake news published and shared that across the world, Facebook by political pressure had to be driving conversations with more than 50 global experts with technical, policy, media, legal, civic and academic backgrounds to inform their policy development and improve the science of detecting manipulated media.

In this century lying has become the first known informational vehicle. Lots of people also show they have no ethics any more. Gross of those leading countries want to have full control. The control of the truth, the propaganda and the attempts to influence the opinion of the population goes beyond mere social networks and the term coined by the “fake news” in recent years. A real problem that has been in the containment plans of governments since the Cambridge Analytica and Facebook scandal in 2016. And, now, it is linked between the plans of the Government of Pedro Sánchez.

As we kick off 2020, big tech companies are undoubtedly feeling the pressure of an election year and the responsibilities their platforms have in the dissemination of information. Even the microblogging service Tumblr, that still boasts hundreds of millions of monthly visitors, has plans to engage with its community, where it had uncovered a Russian disinformation campaign in 2018.

On Monday the 6th of January 2020, Tumblr announced a new digital literacy initiative in order to

“help empower its community and the next young generation of internet citizens recognize suspicious online activity and behavior.”

Perhaps we may think there still could be serious people behind those platforms who know money is not everything and know that they too can play an important role in bringing truth and in educating people. Tumblr wants its new initiative to act like a guide on how to achieve a positive and healthy relationship with social media and a resource that will help their users spread the word, according to Tumblr’s Director of Social Impact and Public Policy Victoria McCullough in a statement to the press.

“When discussing these kinds of themes, we wanted to be very authentic to Tumblr’s communities and the ways they interact with each other.”

Facebook took also matters in own hands to avoid being brought in front of court by having spread disinformation or having manipulated certain events. The new “manipulated media” policy of Facebook meant to curb the spread of deepfakes and misinformation on its gargantuan platform. And while the narrowness of the ban has already raised questions about its likely effectiveness, another perhaps more pressing problem has come to the fore: Politicians get a particular exception to the rule.

Tom Jozef Irène Van Grieken, who was respectively active in the NJSV and the far-right Flemish nationalist student political group in Belgium NSV, eventually becoming National President of the NSV and current Leader of Vlaams Belang

Known media bad actors like Donald Trump, but also very smart manipulators who look not to be actors, like the show beast Tom Van Grieken ( the Belgian politician who has served as Leader of Vlaams Belang since March 2014), will be able to continue to post edited and manipulated media as long as said media is not in the form of a paid post and Facebook deems it somehow newsworthy. Similarly manipulated content, under the new policy, would be removed by Facebook were it not posted by a politician.

The extremist racist right wing party Vlaams Belang (Flemish Interest, previously Vlaams Blok) and some other like-minded parties in Europe provided a huge income for Facebook in 2019, so they would not stop or turn-down such a goldmine.

House of commons (2018,p60) claimed that among the relationships in society, people are likely to build connection and willing to share common hobbies and opinions, which leads to the incredible fast spread of misinformation. Not only social factors, technology also makes this problem worse. The online digital environment makes the circulation of the content much easier and leads to a broader circulation of information ignoring its accuracy and intention.

The fake News on media platform has caused confusion about the basic facts of current events and people recognized that they have taken part in the process of sharing fake news online(Jang, S. M. & Kim, J. K., 2018) The most widespread use of social media to spread fake news has occurred in elections, because the platform allows candidates to influence the views of the majority with minimal cost. Making use of unrelated photographs and fraudulent captions, the politicians can change the result of the election.” (Campan, A., Cuzzocrea, A. & Truta, T.M., 2017)
(Jack,C.,2019,p3) {The role of social media in spreading fake news}

People on Facebook and Twitter too often forget that there are bad actors who want to bring fights in the world and want to set up people against each other. The ridiculous thing is when several social media followers like and share  certain sayings without seriously looking in to it. It was unbelievable what I sometimes could find shared on Facebook as if the saying or video was bringing the truth. Such sharing and the added comments could only help to escalate the situation and whipping people up into a frenzy with false yet sensational headlines and posts as their speciality.

We can only hope in 2020 people shall be more careful and verify information before sharing it.

In the meantime, when people are spending lots of time going from one Facebookposting to another, Tayyip Erdoğan and Donald Trump keep sharing interests (regards to a.o. a Trump Tower in Istanbul + entities close to the Turkish government have gotten in the habit of spending heavily at Trump properties in the U.S. Most notably, the American Turkish Council and the Turkey-U.S. Business Council have held multiple events at the Trump Hotel in D.C.) and keep mocking the world with their sick games, refugee kids and families.

With certain events one can only wonder how it is really. Could it not be considered “not a coincidence” that after President Trump acquiesced in President Erdogan’s request/demand that U.S. forces clear out, Turkish forces could come to bombard the Kurdish forces in Northern Syria?

The president of the U.S.A. seems not to mind what happened next after the withdrawal of American troops, to the allies in the fight against ISIS, betraying them so that he can protect his financial interests.

Trump’s entire foreign policy has been about Trump from the start. Special counsel Robert Mueller found that Russia sought to help Trump get elected, and Trump’s campaign welcomed the help. Going against Mueller now Trump is playing at being a double foreign agent—pushing the prime minister of Australia, among others, to gather information to discredit the Mueller investigation.
Meanwhile, even as Trump spews conspiracy theories about the Biden family, his own children are openly profiting from foreign deals. Eric and Don Jr. have projects in the works in Ireland, India, Indonesia, Uruguay, Turkey and the Philippines.

It shows in what a dirty world we have come.

2016 in review Politics #1 Year of dissonance

Defeating populism in the EU by education of the young people